Volton is another one of those magical cartoons that holds a special place in my nerdy heart.  I remember waking up extra early on weekday mornings just to catch an episode before I hobbled off to elementary/middle school.  The best thing about Voltron was its seemingly endless supply of episodes.  Since Voltron was around for YEARS in Japan before it reached the United States I rarely saw a re-run.  Also, perhaps due to bad translation, I never knew what the hell was REALLY going on. Voltron was great because it was mercury guzzling crazy!   They ran the same transformation animation so many times that the sequence is forever etched into my brain.  There is some good news for Voltron fans everywhere!  Like a global pandemic, re-launch fever is sweeping the land and Voltron has not escaped its reach. Some remakes will be good, and others will take your childhood memories and poop all over them like a Vietnamese punji-stick.  We just learned that everyone’s favorite transforming-robot-lions will have their very own San Diego Comic Con panel hosted by none other than the ultra-fun Carrie Keagan.

What we know so far:

The New Show: “Voltron Force” will be the new name given to the animated series on Nicktoons.  Voltron Force will also be given an obligatory toyline from Mattel that will offer heroes and villains from the new series.  There are also rumors of a feature length Votron film depending on how well the series does on Nick.

Episodes: Starting in June (they just started airing a few weeks ago.. oops) 2012 Nicktoons will air 26 half-hour episodes of “Voltron Force“, with the option to produce more if the series does well.

Plot: Variety leaked some plot points and  stated that the series will be similar to the original (robot lions), but will introduce some new recruits brought in to fight alongside the original characters.  Remember when they replaced the black lion with the princess, that was bonkers!!

We’ll be at the panel for sure and will fill you in on all the goodies.  Plus we think Carrie Keagan is going to be a blast to watch. UPDATE – The panel will be held Thursday, July 21 at 6PM

We’ve been told a handful of times that we need to cover more T.V.. Sadly, due to my schedule I don’t get to watch as much T.V. as I’d like to. All attempts to clone myself in order to maximize efficiency have ended horribly. How horribly you ask? We’re talking inside-out Ashs flopping around in a pool of pink goo until they expire.. true story. Here is a list I complied of early 2011 premiere dates for new seasons, new shows, and mid-season replacements.  Which ones will you be watching? 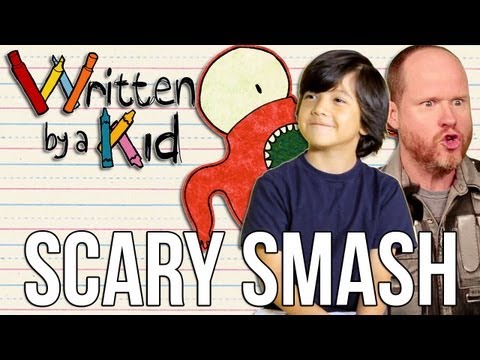 Written by a Kid: Where Bizarro Kid-Imagination Comes to Life!

I remember writing a multi-part story in second grade about my magical robot wristwatch. The story was so strange and filled with raw imagination that my mother kept it for ages. Heck, it may still be in an envelope someplace in the bottom of a dresser. Kids have unfiltered and unsullied imaginations, and that imagination is what makes Geek and Sundry’s Written by a Kid so incredible. Actual stories written by actual kids are brought to life visually for our enjoyment.