Last month we asked some of our readers who they wanted us to talk to next, and Carrie Keagan’s name was on the top of the list. Carrie actually intercepted our tweets and agreed to do the interview on the spot… that sort of thing generally doesn’t happens to us, so we were jazzed to say the least. Who is this Carrie Keagan you speak of? Well, you may recognize Carrie from from Up Close with Carrie Keagan, a totally unique entertainment news program. On Up Close, Carrie manages to shatter every rule of journalism and actually has the chutzpah to ask “A” list celebrities questions other journalists would never have the courage to ask themselves. If you haven’t gotten a chance to see Up Close, you may have seen Carrie’s run as the co-host of G4TV’s Attack of the Show; where she gave the quick witted Kevin Pereira a run for his money without even breaking a sweat. Enjoy this candid conversation with Carrie Keagan, I did my best to keep up…

NA-Ash: Carrie thanks so much for chatting with us! I have to say, your interviews on NGTV are simply awesome and there really isn’t anything like them on T.V. (or the web). How’s your morning going?

Carrie Keagan: Great! Thanks for asking. I don’t care what anybody says, vodka martinis are a delicious breakfast!

NA-Ash: Now, you’ve literally interviewed everyone in Hollywood, from Johnny Depp to George Clooney. Do these massive celebrities ever intimidate you? How do you have so much damn courage? (I’d probably pee a little.. okay a lot.. like a gallon)

Carrie Keagan: I’m not gonna lie to you, what I do with celebrities is rocket science. When I’m in the room doing an interview with, let’s say, Brad Pitt what you see, on the outside, is a happy-go-lucky girl laughin’ it up, having a good time and cussing. But what’s actually going on, on the inside my mind, is me running algorithms, probability vectors and Frenet-Serret formlas. You hear me say “fuck” but all I’m thinking about is the Darboux Vector. So as you can see there is no time for intimidation or fear…it’s science at its most empirical form. Not a day goes by that I don’t appreciate my honorary degree from the University of Phoenix.

NA-Ash: We interviewed Bitch Slap’s Julia Voth earlier this year and while I was doing “research” for the interview I stumbled across an interview you did with the cast. Not only was it one of the funniest interviews I had ever seen, it was down-right scandalous. What the hell happened that night?

Carrie Keagan: Whatever could you possibly be referring to? It was a classic meeting of the minds. And mouths. Biblically speaking. Truth is what you saw was just the tip of the iceberg…but I’ll never tell.
That interview was done at No Good TV studios, a magical place where the rules are: there are no rules. Oh, and we have a fully stocked bar. Hot girls who can kick ass and take names, full bar, giant penis pillows…bing bang boom: MAGIC!

NA-Ash: All of us at NA loved when you co-hosted Attack of The Show. Did you hesitate at all when they whipped out the Power Girl costume? Tell us the truth; Power Girl was Pereira’s idea wasn’t it?

Carrie Keagan: No hesitation! I had a blast playing Power Girl. It was great to, finally, have a reason to wear a cape outside of the bedroom…but I digress. Let’s just say the costume fit in all the right places…purrrrfectly. Was Power Girl Kevin’s idea? I don’t know….Do all guys spend their free time thinking up ways to dress up girls in tight little outfits for their own pleasure? Hmmmm…Maybe! Attack of the Show was a great time.

NA-Ash: You’re incredibly vocal about using certain “assets” to your advantage in an interview. When did you realize that you had magical powers?

Carrie Keagan: I can see that you’re referring to my giant, heaving, beautiful set of brains. Oh yeah, and I guess my boobs are ok too. I like to call them chesticles. I feel like it gives them more respect from the men types. As for the magical powers, who told you I was a witch?! But in answer to your question, I believe it was a Tuesday.

NA-Ash: On that same note, you make professional entertainers laugh each and every time you interview them. If you had to guess, what is it about you that makes people so comfortable and willing to laugh, even after they’ve done dozens of interviews that day?

Carrie Keagan: To be honest it’s a time tested scientific formula: when in doubt go with the dick joke. After a long day of sweating in the heat of oppression I remind them how fun it is to let their freak flag fly. All in the name of professional journalism, of course.

NA-Ash: It’s funny, we put your amazing Scream 4 interview up on our site and had a reader ask us over Twitter why we hadn’t interviewed you yet. You read our tweet and were nice enough to agree to do an interview. Do you read all of your twitter messages and fan mail? What is your perspective on social networking? Is it strange reading what people are saying about you?

Carrie Keagan: Everybody knows the internet is the super highway to the digital Playa Hata’s Ball, but social networking is awesome! I can connect with you fine folks, my fans, and most importantly stalk, stalk, stalk! I mean…observe from an appropriate distance. That’s what it’s for, right?

NA-Ash: Can you tell us a bit about VH1’s Big Morning Buzz Live? Is this going to be something we have to DVR every morning?

Carrie Keagan: It’s the smokeshow of talkshows!! Too hot to handle and too hard to ignore! Watch it, DVR it, snort it, hell, go ahead and mainline it! However you want your buzz, you’ll want to get it from me – cause I’m not here to judge. I’ll be ragin’ out with my cage out every morning with movie stars, music artists and everything in between…LIVE! I just hope whoever’s in charge of the “bleep” button is trigger happy and over caffeinated. Just kidding….or am I? Plus you get to wake up with little ol’ me 😉

We are pleased as punch to welcome back Alix Wilton Regan, voice of one of the fantastic Inquisitors in Dragon Age™: Inquisition! 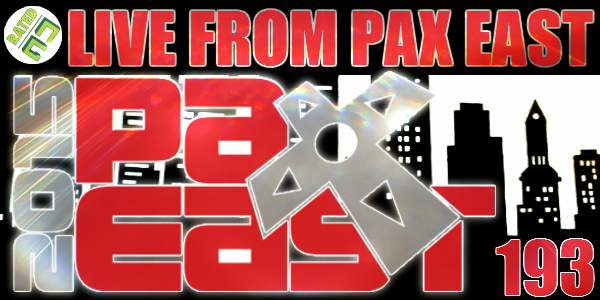 Ash and Matt head to PAX East to play some games and hang out with some very special guests! – They also take a look at Blizzard’s Overwatch, We Happy Few, Mayan Death Robots, Masquerada, Necopolis, Ghost Song, Curses and Chaos, Death’s Gamble, Westerado, and more!