Tabletop. Every PAX, its the part of the show that we always aim to make it to, but somehow leave feeling like we didn’t spend enough time there. At PAX East, we were luckily enough to find High Heavens, a project from Harmonix veteran / Art Director, Ryan Lesser. High Heavens is described as a board game where gods battle in the skies! Matt and I, being the competitive gaming friends that we are, sat down to give it a go.

In High Heavens, you play as a faction of deities and demigods from different mythologies and battle against an opponent in a head to head format. The game takes place in the clouds, on a 5 column hexagonal map. You win the game by destroying the opponents home-base. For instance, Matt and I played a demo at PAX East 2013 — Norse vs. Greek, with the home-bases as Asgard and Mount Olympus.

Followers of our site know we have a certain affinity for these types of games, as evidenced by our obsession with the mobile game Hero Academy, which is a good starting frame of reference for High Heavens. You might also think of High Heavens as Chess with some MTG elements.

That’s because the game requires strategy, and a little bit of luck. You deploy your gods from your home-base, but the gods you can deploy depend on the cards that you have in your hand. The draw deck for each faction provides a random element to the game, ensuring that no two battles play out the same way.

What we really loved about High Heavens is that each character in the game has a unique set of stats (e.g., health, movement, range, melee power, special abilities). We spoke with Ryan about the design of the characters, and why he choose this source material. He explained that he is something of a mythology nerd, so each character’s stats and abilities is modeled after the god itself. For example, Hermes has a longer movement range, while Hercules has more melee power. Some characters can heal or revive teammates, while others gain armor bonuses or can debuff enemy forces. 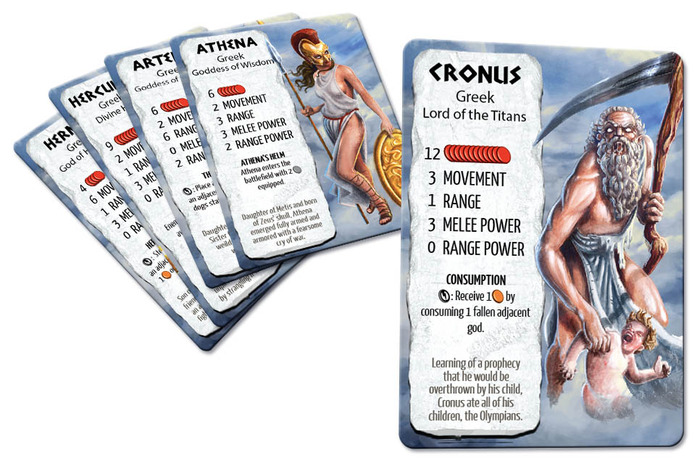 The character design is extremely well thought out, and the games we saw at PAX were totally balanced. Of course, I won the battle between Matt and myself, but Matt literally would have won the game on the next turn. The strategy is pretty deep too, it literally took me 5 minutes to plan the attack that won the game. The game next to ours was also extremely close in terms of the remaining hitpoints on the winner’s home-base. We were also able to complete a game in less than an hour.

The game pieces themselves are well-designed too. For example, Gods stand on stacks of colored chips, to indicate status such as health, armor, attack bonuses, and poison debuffs. Pieces are designed to be clean and easy to view at a glance. The result is that you can play a very nuanced strategy battle, without the board being crapped up with a bunch of loose pieces. Solid.

What’s more is that Ryan has plans for expansions, Norse and Greek gods are only the tip of the iceberg. There are already plans for an Egyptian expansion, and the sky’s the limit (see what I did there?) for other expansions… Japanese mythology?! Native American mythology?! How freaking cool would that be.

Sounds awesome! Where do I get this game?!

So here’s where you come in. High Heavens has just a few more days left on it’s Kickstarter campaign, and the project is really close to meeting it’s goal. But one look at the Kickstarter page, and you’ll see why some of these stretch goals need to be hit too. There’s some really awesome game enhancements in the works, like 3D modeled mini’s, terrain pieces, a neoprene play-mat, and custom molded stacking chips for character effects.

Having had a hell of a lot of fun playing this game at PAX, we’d highly recommend you visit the High Heavens Kickstarter and consider backing this project.