Last year we wrote up a guide for Comic-Con goers that featured some tips and hints designed to help folks have the best time possible.  We’re super nice like that. Well, this year we’re expanding our list to include some more secrets that we’ve learned in our many years of attendance.   It’s pretty special show and we want you to have the best time possible. Many many nerds  sweat to bring you this information.

1. Get your 2013 tickets ASAP:  This just in, there will be NO onsite ticket sales this year for SDCC 2013.  Tickets for 2013 will go on sale at a later date.  This is a major change that has the capacity to really alter the way the game of Comic-Con is played. We’ll keep you up to date with what we discover. (REDACTED)

2. Ignore Hall-H: We said this in last year’s writeup as well, and the information still rings true, Hall H is NOT worth it.  For those of you new to Comic-Con, Hall H is the massive room where all the huge panels take place.  This means that all of the major news outlets like NBC, and CNN will be covering Hall H and releasing information to the masses as its happening.  Trust me, there is no such thing as being “the first to know” anymore.  Hall H can be a lot of fun if you’re willing to wait in line and…

3. Camp Those Panels: Unlike the Penny Arcade Expo, SDCC does not kick you out of your seat between panels.  Felicia Day’s web-series The Guild actually had a great episode recently that revolved around seat saving at conventions.  If you get ahold of a great seat, it’s yours!  As we stated last year, you may have to sit through a few panels you don’t care about in order to see the ones that matter to you the most.  Find out what room your panel is being held and get there at LEAST two hours early. Sadly, Comic-Con suffers from a lemming-like pack mentality where everyone lines up, simply because there is a line.  Hell, I’ve seen a line form for absolutely nothing on more than one occasion.

4. Master the Floor:   Without fail the floor offers some of the best sites and sounds of Comic-Con.  From cosplay and creatures, to signings and giveaways, you WILL see something new each and every time you wade through the madness.  In past years I’ve had chats with Joss Whedon, played Rock Band with Felicia Day, and laughed it up with Rosario Dawson. Just keep your eyes open and always be polite. Nobody likes a pushy jerk. 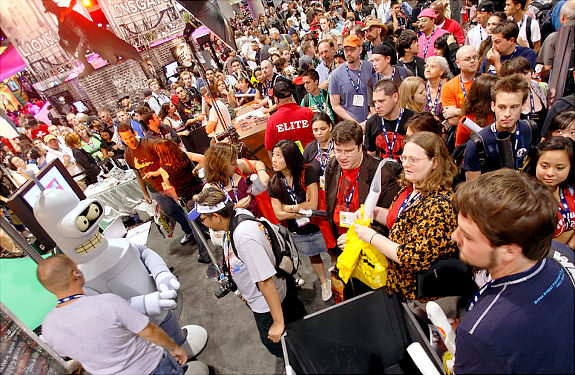 5.  Don’t Stress… You Can’t do it All! If you’re at Comic Con to see a panel for your favorite show AND meet your favorite actors and creators, you may have to decide which you want to do more.  Due to broken logic, signings typically take place directly after a show’s panel, meaning that people are lining up for the signing while the panel is taking place.  Since us humans don’t have the ability to be in two places at the same time, this situation sucks.  How can you triumph?   Find out which studio is in charge of your favorite T.V. show, film, or game and hit their booth nice and early.  If they have their shit together they’ll let you know what times their signings are taking place and if the signing is ticketed.  Again, be polite!  Remember, you’re there to have fun… Don’t ever let a line situation stress you out, no matter how badly you think you want it.

6. They Mostly Come out at Night… Mostly:   Would you believe there is a ton of stuff to do at night as well? Just because Comic Con’s programming ends around 9 or 10 PM doesn’t mean that the party is anywhere close to over. There will be DOZENS of events going on as soon as the sun goes down. Talk to the folks that work the major booths (WB, NBC, FOX, etc..) and see what sort of off-site programming they have planned for the evening.  If you ask nicely they’ll probably tell you what time they’re giving away tickets, or may even give you one on the spot.  From podcasts to comedy shows and movie screenings, there is something for everyone at night… Keep your eyes open and your Twitter feed updated.

7. Bring Some Cards: We all agree that business cards are lame, but there is no better place to make new friends and contacts than SDCC. Bring some business cards with your e-mail address, website, blog, gamertag, or whatever else you’d like to share with your new-found friends.  Many people that attend Comic Con return each and every year, so there is a very good change that you’ll probably be seeing them again.  I’ve met some incredibly fun and talented people at conventions, so do yourself a favor spend a few bucks. Vistaprint has some great deals on basic cards, while MOO puts out some incredible, albiet more expensive, stuff.

8. Train Like Rocky: I know I sound like a jerk for saying this, but a lot of us nerds aren’t in the best of shape.  Comic Con is a massive event and you are going to be walking a heck of a lot.  Make sure you have physical capability to walk long distances and go for long periods of time without a good meal. Sure, you’ll do just fine if you can’t walk up a flight of stairs without sweating your ass off, but you’re in for a really rough weekend.  In years past I’ve traveled with folks that have gotten bloody from extreme chafing… true story.  We call that the “Sizzle Crotch.”

9. Rations -Hit Up Ralph’s: There  is a glorious supermarket right next door to the convention center!  Ralph’s should be the first stop on your Comic Con journey right after you check into your hotel.  We’ve joked in the past about $10.00 Mrs.Fields cookies and are only slightly exaggerating.  You’re wasting your hard earned cash if you eat convention food.  Be smart and stock up on tons of snacks from Ralph’s for your Comic-Con adventure.  You’ll see all the Comic-Con vets shopping there.

10. Never…EVER…Take a Petty Cab: You may be exhausted, but I promise you, it’s not worth it.  The San Diego petty-cab drivers are a bunch of scurvy, coin loving, pirates!  I once took my wife for a SD petty cab ride thinking that it would be fun and romantic.  I ended up getting in a verbal argument with a petty cab driver that was trying to charge us over $30.00 to go just a few blocks. It may seem glamorous or “fun” to have another human being carry you from place to place, but with the rates they’re charging your much better off taking a regular taxi.  Many of these guys will hide their rates or take you the wrong way to make a few extra bucks. Trust me, they really don’t WANT to be shuttling you around… what they do want is your money.

There you have it, ten secrets of Comic-Con that will help guide you on your adventure.  Please follow us HERE on Twitter for all sorts of SDCC updates.  We’ll see you there. 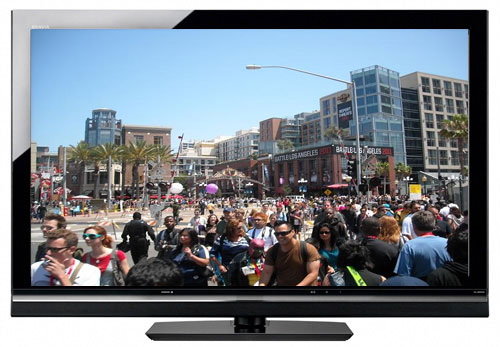