Steel Battalion is back. But before you go digging in your couch cushions to scrounge up enough loot for another huge controller set, you can rest easy. Steel Battalion Heavy Armor uses both a standard Xbox 360 Controller and the Kinect Sensor. Yep, you read that correctly, both, as in at the same time. If there were ever a contender for next year’s PAX Omegathon, Steel Battlion Heavy Armor is it.

My experience with the game focused more on the controls than the narrative so let’s get caught up with what’s going on here:

“Set in 2082, Steel Battalion Heavy Armor depicts a world devoid of semiconductors, where war is waged with rudimentary weapons as new superpowers struggle for dominance. In a twist of fate, the U.S. army has been forced to begin major landing operations on what was once its own soil. In this low-tech era, there is one weapon class that will determine the course of the war – the Vertical Tank (VT). VT movement, aiming and firing of the main guns are undertaken using the Xbox 360 controller, while all other controls use Kinect for Xbox 360.”

Got it? Good. Now, I’ve never been a fan of the term “hardcore” when applied to gaming. Personally, I think it’s a marketing term that’s used to divide the community against itself into targeted demographics. So, instead of calling this a hardcore game, I’m going to say that the controls are simultaneously challenging and legit. And, while I’ve never personally piloted a mechanized robot fighter (here called a Vertical Tank, or VT), I think that the Kinect functionality is used in creative ways to make the experience more like simulation than anything remotely similar to SBHA.

What is striking about SBHA is that the experience inside the VT is as rich as the one outside. Let me explain: While the front line-combat you know so well is taking place in front of you, there are also crew-mates inside your VT with you: they talk with you through missions, help you operate the VT, and even ask for fist-bumps after successful missions (seriously,  every Kinect game needs virtual fist-bumps, and ultimately, chest-bumps).

Side note: At this point in the article, I thought it would have been funny to link to a YouTube video of a chest-bump from the Fresh Prince of Bel-Air, because I like to keep my referential humor current and relevant. Instead I found this, sorry.

Back to the preview: So yeah, half of my game experience took place inside the VT. You make a pushing motion with the controller to move between the VT viewport, and the interior of the VT. Inside the VT you have access to radar, maintenance controls (like venting smoke from the cabin), and your squad-mates. There are panels and controls everywhere, and to operate these VT controls you take a hand off the controller and reach out for the panel / display with which you want to interact.

Pulling yourself into the VT’s first person view, the controller is used for movement, aiming and firing weapons. It seems so pedestrian to talk about these controls when so much else is going on, but it legitimizes the experience with finer control on an actual gamepad, rather than trying to implement some Kinect based combat system.

The Kinect controls feel more natural, than wedged in. At one point in the tutorial I had to open up the lid of the VT to take a look around (think Chewbacca in the AT-ST). To do this I actually had to “stand-up”. It’s controls like these that make the Kinect experience feel integrated, without seeming like a novelty. It’s not an action that takes the place of something you can easily do with a controller (“Liara… Singularity”), but a careful blending between Kinect and Controller action.

Here’s the catch with Kinect controls… you need to be assertive. If you stick your hand out like a 5-year old seeing 3D for the first time, you’re not going to get anything. If you need to reach out and grab a panel, the game is much more responsive if you go straight for the motion, make a fist (like grabbing something), then pull the arm back. The hardware tracks your movement faster than the on-screen hand indicator suggests, so just go for it!

So yeah, maybe it’s a little complicated, but it’s challenging and innovative. SBHA opens a door for the meaningful blending of motion- and controller- based gaming. Hopefully we’ll get to see a demo for this, because it really has to be experienced to really know what’s going on here. Steel Battalion Heavy Armor was developed by From Software, published by CAPCOM, and comes out in June, 2012.

You can’t kill the metal, metal will live on. Happy gaming.

Collecting: That Time I Bought a Replica Zombie Killing Handgun

I’ve always been a collector. For over a decade it was comics and toys, followed by DVDs and other nonsense. While I’ve cut down on the number of items I currently collect (sorry comics and toys), I do on occasion fork up good money for something truly special. 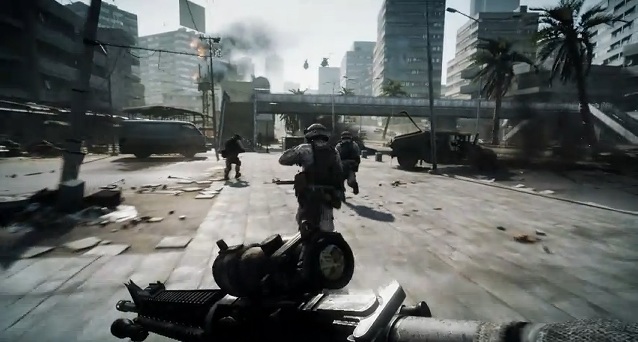 Battlefield 3 boasts a brand new Frostbite 2 engine,along with mo-cap and modeling stolen from EA sports. That means it looks INSANE.