Alan Wake's gamepaly is driven by its story.

I’ve been playing video games since I was old enough to type at a keyboard and hold a joystick. In that span of time I’ve played hundreds of games, dare I even say a thousand. I realize now that I am biased. For me, the story trumps everything.

For others (or most), gameplay is king. Look at what types of games are popular now: fighting, sports, multiplayer FPS. Story just isn’t a central element of these games; and, because of that they are forgettable to me, and typically not my first pick for something to play. Some play CoD: Black Ops just for the mutiplayer. Heck, the original PC Battlefield 2 didn’t even have a single player campaign. I have seen game collections of some friends who only own multiple “years” of sports titles, and can justify why they still have Madden NFL 08 on the shelf. 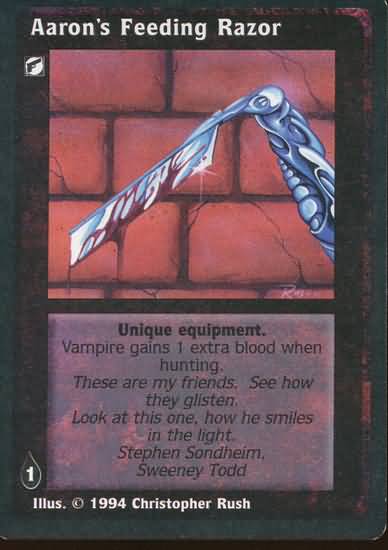 The flavor text on the original Vampire CCG cards was often longer than the card description itself.

My experience with gaming, in general, is slightly different. I can tolerate a not-yet-mature gameplay mechanic if the story is captivating. I build Magic: The Gathering decks that are themed and storied, even if it does nothing in the way of helping me win (Example: Super Mario Bros deck containing fireballs and warp worlds). I enjoy reading flavor texts when they appear in games, just to increase my immersion in the game’s world. I also seek out supplementary material when available, such as the Mass Effect comics, or Alan Wake web video series.

The Story is the reason…

This had led me to form some controversial opinions about certain games: I still favor Mass Effect 1 over Mass Effect 2, I think the original Assassin’s Creed is still worth playing for the slow-moving Absergo sequences, and I believe Alan Wake is a better game than Red Dead Redemption (I’m looking at you, Mexico). And I still believe that System Shock 2, despite containing a ton of text for a game of its kind, is one of the best games OF ALL TIME.

“Story” is the reason why I finally played Max Payne 1 and 2 for the first time earlier this year. It is the reason why Heavy Rain was such a great game, and why you should go back and play Indigo Prophecy (and, if you’re really serious, Omikron: The Nomad Soul). It is why games like Beyond Good and Evil and Psychonauts become cult classics, despite lacking commercial success. It is why you know what I am talking about when I mention the ending to Super Metriod, or the “Opera Scene” without mentioning the game’s name. Story is also what makes a simple game like Portal go from “good” to “great”. And it is one of many reasons why you can get excited about Star Wars: The Old Republic as a “new breed” of MMORPG:

… games be elevated into greatness, or come apart at the seams.

Stories have the ability to both make and break a game. What we see in a number of modern games it a front-loading of plot elements (and action) into the first fifteen minutes. Its no secret that the goal of this tactic is to get you to buy a game after playing at a friend’s house, at a store, or after downloading a demo. This seemed to be the case with Brutal Legend, whose story was action packed up-front, but seemingly fell to the wayside in the middle of the game during RTS-combat and side quests. In other cases, a story cannot hold until the end of a game. Red Dead Redemption fell flat in the middle, and, admittedly, the plot twists of Indigo Prophecy got a little out of control toward the end.

Try it, they're not kidding

On the brighter side, games can reward you for hanging with them even when things don’t immediately make sense; such is the case with Portal and Braid, when the player finally reaches those a-Ha! moments. More recently, there have been a rash of indie games, whose minimal gameplay but interesting premise, challenge you to rethink what future tripe-A titles might actually be capable of. I’d recommend checking out One Chance, and The Graveyard. These are off the beaten path, but should illustrate the power of different types of narrative in games.

How has storytelling in games effected your experiences or enjoyment with them? Has a game every been ruined for you by the story? What are some of your favorite video game stories? Tell us your tale…

How Gears of War 3 Will Change Shooters… Forever.

The Gears of War franchise has done a whole lot for multiplayer gaming including an incredible cover mechanic, horde mode, and more polish than the Heisman trophy. So why will Gears of War 3 change shooters forever? Two Words… Karen Traviss