It’s 2011, and it’s time to stop trying to compare every Bond game to Goldeneye.

This review comes from a place of a genuine James Bond fan. I’ve read half of the books, and seen all of the films in chronological order (thanks to one school-free summer some years ago). I’m not a FPS maniac, and as I’ve stated many times before, I’m biased positively toward games with good stories. So, when I sat down to play this game what I was really looking for was over-the-top action sequences, a chance to be like Bond, and interesting locales. Mission accomplished.

Most players will be familiar with the third person shooting mechanics of the game. There is a cover system, which at times, is a bit too realistic. By realistic, I mean to say that not all cover offers 100% protection, which is sometimes frustrating, but it works against the AI too. The cover system lends itself well to the hand-to-hand combat mechanic, that, while simply consists of pressing a single button, is really satisfying. Performing hand to hand combat moves rewards Bond with a focus aim. The hand-to-hand and focus aim system are similar to Splinter Cell: Conviction’s “mark and execute”, except you don’t mark, and the shooting isn’t automatic. In Conviction, you wouldn’t always successfully neutralize an enemy with melee if they saw you, but Bond has plenty of knee kicks and throat chops to keep the baddies down.

This game features an original story set in the (modern) Bond world. This is Daniel Craig’s deconstructed James Bond, which translates better to gaming than Sean Connery’s Bond. (Imagine spending an entire level of a game hanging out in your hotel room checking for bugs, smoking cigarettes, and getting liquored up.) There’s some kind of weapons conspiracy, a mystery to uncover, locations to visit, etc. The content of the story is predictable, but appropriate to the setting. Like a good popcorn flick, you just enjoy the ride. And ride you do. Most of the games levels are interspersed with some driving action. Bizzare Creations does a good job of incorporating these sequences, the environments, and the driving mechanics, most likely drawing on their PGR chops. For environments you speed past doing 100+ mph, they are incredibly detailed. There are plenty of wrecks, explosions, and general destruction to keep your brain happy as you travel with Joss Stone all over the world.

Finally, the hand-to-hand animations really fit the gritty, brawler profile of this updated Bond character. I never got tired of reaching around a corner to grab a patrolling guard into a headlock or bull rushing through a door and tackling the guards on the other side. There are combat animations for stealth and action, which change depending on your position relative to the enemy. For example, grab an enemy from behind a low-wall and Bond bashes his head on the wall before pulling him into concealment. Craig’s Bond fights like a thug at times, sloppy almost, and thats what you’ll get here. This action is very faithful to Casino Royale and Quantum of Solace.

And here we go again with story-driven games and multiplayer components. We place GoldenEye on such a high pedestal, and I think it’s mostly because of the multiplayer component, which was innovative for its time. But I challenge you to go back and watch that movie (90’s-tastic), and you’ll remember why Sony rebooted the franchise. The single player game and story of Blood Stone (and Quantum of Solace for that matter) are better than GoldenEye, but sadly, the mutiplayer is not. [A case could also be made as to why Perfect Dark was better than GoldenEye, but you never hear anyone talking about that.]

The online play is laggy — during our review we saw a couple of choppy avatars, and some extremely questionable melee combat. You still get focus aim in multiplayer, but there are no combat animations! The cool throat punching of the single player is replaced by a lame gun-swing animation, which never seems to connect when you need it to. Otherwise the multiplayer is standard fare — unlockable weapons, medals, but no unique character models — MI6 vs Baddies only. 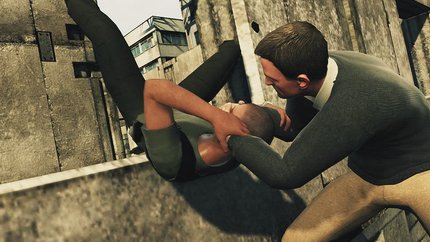 – For your eyes only: If you’re a James Bond fan you’ll do yourself a favor to check out this game and enjoy the action sequences. A little something to tide you over until the next film.

– Location, location, location: Because Bond is a world traveler, all of the locations have very different look and feel to them. Although the game is relatively short, it keeps you interested.

– Fight like Bond: I can’t stress the fun of hand-to-hand combat enough. In the movies, Although similar to Conviction, the real idea is to reproduce Bond’s fighting style on film. He’s a bit reckless and aggressive. You can fight the same way in this game — Headlock the enemy closest to you, use a focus aim to quick-kill the next guy. There are times when you need to hunker-down for the prolonged shoot-out, but the game still lets you outflank some guards to gain the upper hand. Don’t think of it as a knock to the difficultly (because the game is hard enough toward the end), but a faithfulness to the experience.

– Characters: The graphical quality of the character faces is off-putting at times. Daniel Craig has this way of delivering Bond’s lines with a pouty face IRL, but sometimes his animation looks more like Keamy (Kevin Durand) from Lost.

– Unlockable difficultly: There are four difficulty levels, the hardest of which unlocks after completing the game. The hardest difficultly also has its own set of achievements, effectively non-stackable. This is not a way to build in replay value.

– Multiplayer: Let’s assume Bizzare used some of Treyarch’s code from Quantum of Solace which, in turn, borrowed a bit from CoD. QoS multiplayer had a number of game modes, was fun, and pretty solid. By that logic multiplayer in Blood Stone should be pretty solid too. This game is already a few months old and still pretty laggy, plus the inability to reliability to connect with a quick melee in the heat of battle is a deal breaker.

– Driving: Visually, the driving sequences are spectacular. Handling-wise, the cars and boats are great. However, the problem is that the sequences are canned, with very little room for creativity. Most driving sequences are chases, which don’t end until you reach the end of the course (not when you actually catch up to them). The concession was most likely made to keep the story’s action congruent, but does little to promote fun gameplay. 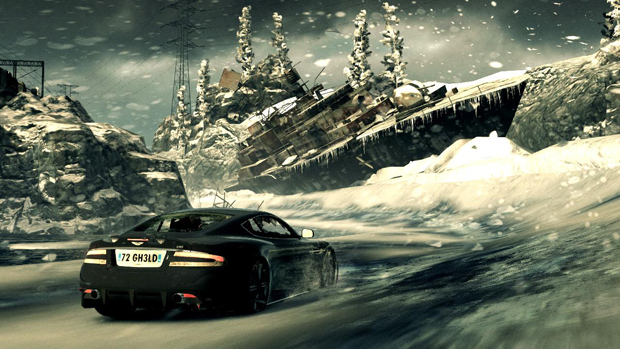 Why you should play it

Play this game if you are an action or Bond fan, and want to jump into a fully voiced and character acted story for a weekend. The game is challenging at higher difficultly levels, but not cheap. There are plenty of better multiplayer experiences out there, but you will enjoy the action sequences and combat in the single-player experience.

More importantly, this might be the last we hear from Bizzare Creations, which is really too bad. You’d have to imagine how difficult it is to compete in the current gaming climate, especially among shooters, but this is a solid outing. To the folks at Bizzare Creations: Thanks for this and PGR. Happy gaming.

The presence of electronic gaming has grown each and every year at San Diego Comic-Con International, and this year is the absolute biggest year yet. SDCC will host a number of panels revolving around some of the hottest video game franchises in existence, and we’ll sure do our best to provide the best coverage possible. 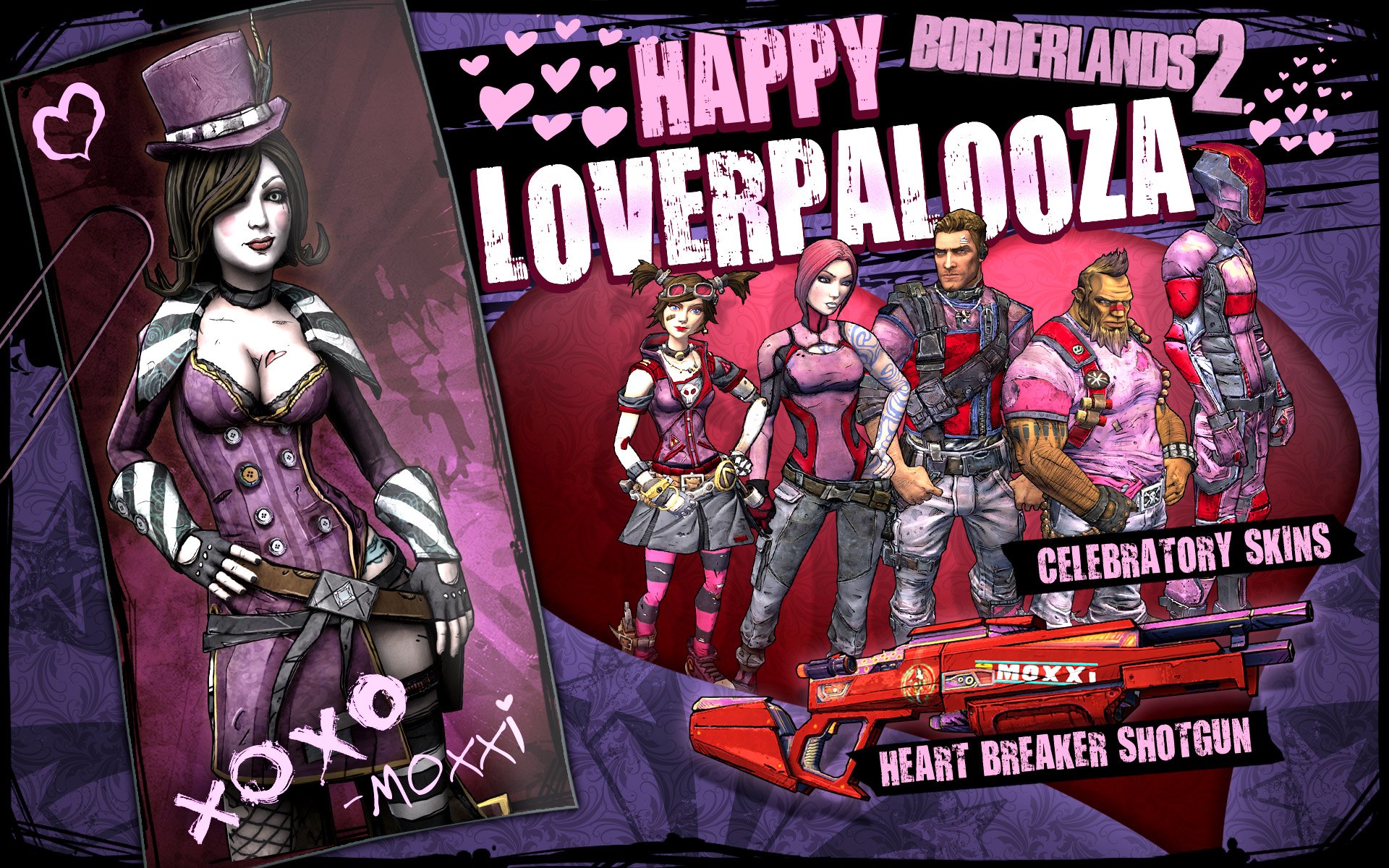 Happy Valentine’s day gang! Who would have thought we’d still be celebrating the sacrifice of some Christian saint that was beaten and beheaded in the name of love. Today, the fine folks at Gearbox issued a special Valentine’s day SHiFT code that can be used for some all new Borderlands 2 prizes. We love prizes

Challenge mode ads 17 new “challenges” for the player to complete, ranging from easy, to near impossible.