Ahh Mass Effect, how I love your sweet biotic embrace. I had a feeling the Mass Effect fans would swarm the Charting a Course: Developing the Next Mass Effect panel at this year’s San Diego Comic-Con International, so I hobbled down to room 25 ABC about three hours before the panel began just to make sure I got my curious butt in the door, and it’s a good thing I did. Matt, who showed up about an hour and half before the panel began, didn’t make it in. While the next Mass Effect is still a ways away, I was actually quite surprised at just how MUCH the team revealed. Enjoy!

It should be noted that the panel was moderated by Nerdist’s Malik Forte (Gaming Editor) and panelists included Carl Boulay (lead animator), Mike Gamble (producer), and Noel Lukasewich (senior artist). Jessica Merizan (community manager) was also on hand at the beginning of the panel to give away some great Mass Effect loot to a lucky audience member.

What are some of the difficulties of making the next Mass Effect? – “The fact that we have so many great developers on both sides of the fence (BioWare Edmonton and BioWare Montreal) makes it easier, the problem is time zones and getting face to face time. We spend a lot of frequent flyer points going back and forth to make sure the leads on both sides of the country are happy.” –Mike Gamble

What are some of the trials you have to face making a [series] like Mass Effect? – “[Creating] a new entry into a series like this is extremely difficult. The precedent we’ve set before, the fans, the press, fans like you [the audience] who are willing to camp out during various panels to see it… so we’ve got the expectations of folks like you and our own creative ambitions [regarding] the things we want to do. At the same time we don’t want to retread old ground, right? We want to make sure that we’re doing something fresh, something that has not been done before. [We want to make] a Mass Effect for the next generation; we don’t want to make a new Shepard story, right? That’s not the point whatsoever; [the point is] to refresh things [and create] a spiritual successor to the game as opposed [to having the same characters]. – Mike Gamble

How is the new Frostbite Engine working for you? – “For us, animation specifically, things are going great… A lot of the the barriers we had [with the Unreal Engine] had fallen within the first week. Now we don’t even set those barriers anymore, we just keep checking how far we can go.. it’s just amazing.” – Carl Boulay

How much of a challenge was it to implement multiplayer in the Mass Effect franchise? – “Oh yeah, that was hella challenging, we hadn’t done multiplayer for YEARS at BioWare. It was tough because there is a certain amount of infrastructure that has to happen when you do multiplayer in any game. [You have to be sure] that when you release it that there are no issues, [there is] balance, [and the ability] to add new content. [It was a challenge] developing a feature that acts in concert with the single player game primarily, a game where people love their characters, a game that people play for that single player story…” – Mike Gamble

Was it a challenge finding a balance with the [level of customization] that you give players when they [start the game]? – “[We work on] male and female characters at the same time; this time I think we worked on the female rig first. It has just always been a priority for us. Giving players the opportunity to basically insert themselves into the avatar that they play has always been a big thing and it’s not going to change in the next Mass Effect game [as it is] a big part of [BioWare].”   – Mike Gamble

Now on to the “Meat and Potatoes”

“Let us talk a little bit about the hero. Here are some of the male and female heroes we’ve been working on. You can see basically a slight change in stature between them. You’ll notice a couple of things that are key, a helmet, cloth [armor] that’s clearly not battle armor.. and you’ll also notice N7, so our hero has something to do with N7.” –Mike Gamble

“We’re also working on an under-armor system where these pieces themselves [the exterior armor pieces] don’t have to be on the player at all times… Maximum customization and visual aesthetic.” – Mike Gamble

“The character art team is putting a lot of effort into making those hardwares [the armor set] as realistic as possible, in a sense that they could actually be built.” – Carl Boulay 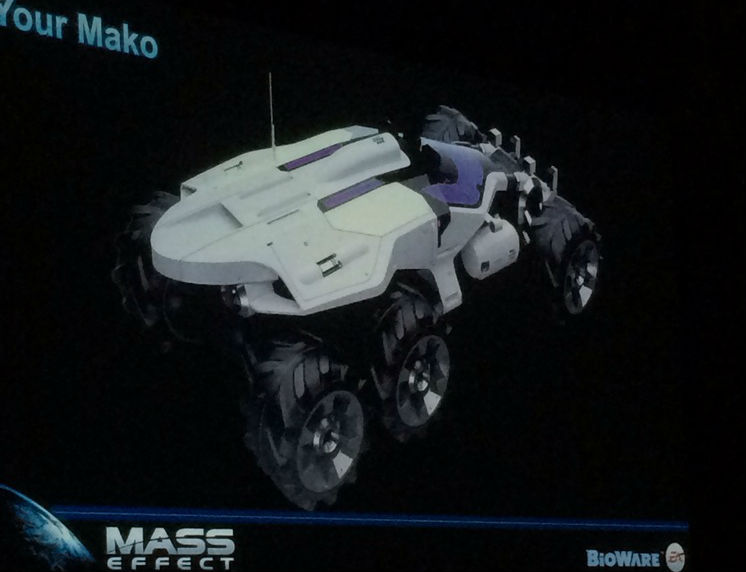 “So, the Mako is back [note: crowd goes crazy], but this isn’t the Mako that you remember, this is a DIFFERENT Mako. The point here is that it is a really agile Mako, it’s different than the one you’ve seen before. There is no cannon on it. Maybe it can hover, maybe it can jump, I don’t know. We’ve [had] a lot of help designing it, it’s gone through a lot of iteration.” – Mike Gamble

“The Mako is meant to be a fast response, point to point vehicle at this point. It’s something you can tear around planets in really quickly and get to where you need to go without a whole lot of fuss. We’re kind of working on the tweaks and the physics, the important part is that the Mako is going to be fundamental to the game. We’re building a game that’s about exploring places, and obviously [if you’re] exploring places [you’re going to need] a really handy vehicle.” – Mike Gamble

Mass Effect 4, where in the timeline is it? “It’s not called Mass Effect 4, damn it! What I will say is that (long sigh) you’re NOT playing as Shepard and Shepard is not a central part of the story, so you can assume whatever you need to assume from that.  We want to give players new places to explore [and] uncharted areas that haven’t been explored before.” – Mike Gamble

Will we have aliens [and whatnot] on our team again? “Yes, we are definitely having aliens in the next Mass Effect game. We can’t give you exact details on squad-mate composition [as we are still] working on that. The races you know, to some degree, are still present.” – Carl Boulay 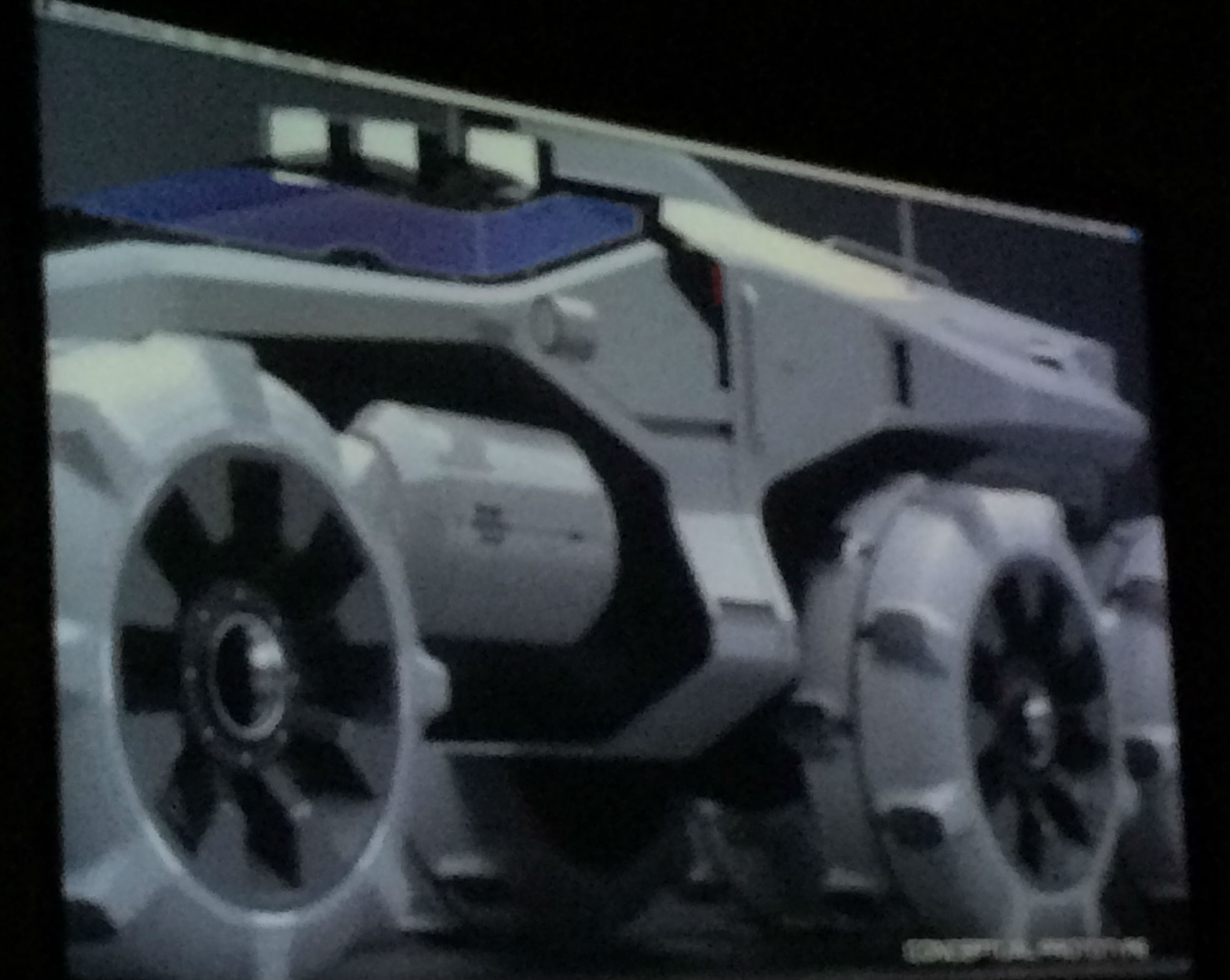 Is there any plan to add player vs. player multiplayer? – “At this point there are no plans, but things could change. Competition is always critical, but at the same time cooperation is bigger for us.” – Mike Gamble

Will there be any pirating or new ship technologies [to help facilitate pirating]? – “If you’re in new places looking for new things there is a sense of making what you find your own, so there is definitely that…” –Mike Gamble

Is the Mako going to be customizable? “In terms of customization, it’s been something we’ve been looking at, sure. We feel as though, if you’re going to be spending a lot of time in the vehicles [that] they should reflect you as a player and customization is one element of that as well.” – Mike Gamble

Will we ever get a chance to see a Volus outside of their exo-suit? “I will say that that is not a bad idea, but that is it.” –Mike Gamble

Is the protagonist strictly human, or can we play as a Turian? “So that is a big one, we haven’t locked down the specifics of that one yet. For sure your main character will be human but in terms of other playable races… we can’t talk about that at this point.” –Mike Gamble

Are there going to be bigger creatures bigger than Thresher Maws? “…We’re looking at creatures of all sizes. It’s part of creating a galaxy that is rich and dense with all kinds of creatures, not just ones that are four to six feet tall. It’s something that we’re looking at for sure, but there is nothing solid right now.” – Mike Gamble

Will we be seeing characters like Aria T’Lok again? “We haven’t decided… well, we’ve decided (but aren’t telling yet). The theme is [that] we want to create new experiences for the player, but we still want to bring in elements of what you know and love about the previous trilogy that might include certain characters and it might not. So guaranteed, either way that we end up going you’re going to see a certain amount of the old with the new.” -Mike Gamble

I never expected to like Saints Row the 3rd as much as I did, but underneath its silly surface was an incredibly polished action experience drenched in creativity, mayhem, and fun. When we got word that Volition games was booking appointments for Saints Row 4 at this year’s PAX: East, I couldn’t wait to see what new trouble the Saints had gotten themselves into. Wow, I’m a fan of this franchise?