Every once in a while a title comes along that changes the way games are made, played, and regarded. Telltale’s Walking Dead takes the adventure game genre and smashes it into a billion messy gore-drenched pieces.  By the time you walk away from Episode 3, you’ll never look at adventure games the same again.  The bar has officially been set.

Catching Up: In case you’ve been ignoring pop culture for the past few years, Robert Kirkman’s Walking Dead series is a bonafide phenomenon with both the Dark Horse comic book and the AMC T.V. series shattering records and gaining fans with every new installment. Unlike the comic (and T.V. show) , Telltale’s Walking Dead series focuses on a brand new hero by the name of Lee Everett, who is given a second chance at life during the zombie apocalypse.  Lee Everett also has my nomination for one of the best written heroes in recent years. 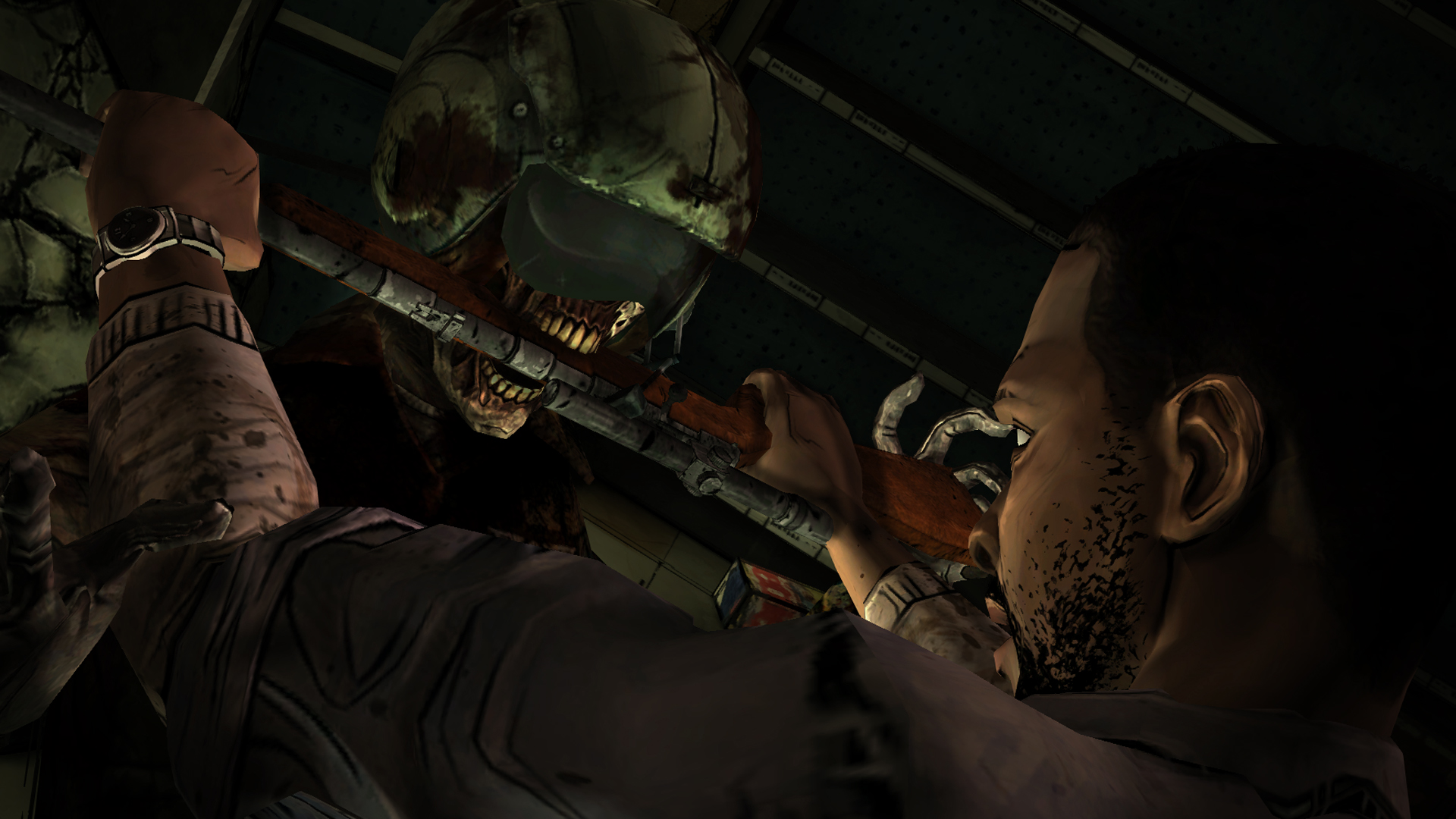 Playing Dead: Episode three boasts a number of action packed shooting sequences that you wouldn’t normally see in an adventure or puzzle game.  On multiple occasions Lee is tasked with aiming the reticle at approaching targets, and must shoot well or suffer the consequences.  To clarify, The Walking Dead doesn’t become an FPS, but simply uses their previously established point and click mechanic in a new and interesting way.  As with most adventure games, puzzle solving is where the real guts of the game can be found, and the good news is that all of the puzzles found in episode 3 feel natural and fit well within the context of the story.  Speaking of story…

Gut Wrenching Terror Incarnate: *SPOILER FREE* Nobody is safe.  Just when you think things are going to be okay… they get much much worse.  There was one point during my time with episode 3 that I literally yelled “NO! WHAT THE FUCK!” and frantically tried to undo what had been done.  Within seconds, one of my favorite characters was no longer part of my narrative.  Was it a decision I made incorrectly?  Did I not steal enough supplies in pharmacy? Did I not click a button fast enough?  What the hell did I do wrong?  It then dawned on me that Telltale had succeed in doing something truly remarkable, Telltale made me care.   Episode 3 is without a doubt the “Empire Strikes Back” of the series. You know, that middle chapter that makes you feel like it couldn’t possibly get any worse… With multiple shocking (and unavoidable) character deaths, Lee’s story of redemption and salvation is a masterfully written (and acted) tale of horror.  Even if you HATE zombies, you’ll love The Walking Dead.

Nerd Appropriate: By the time I completed episode 3 I felt as though I had been kicked in the stomach by a pack mule.   With emotions so real, and environments so immersive that you can almost smell them, there is something truly special about this title.

Two more fighters have been reveled for Capcom’s soon to be released brawler Marvel Vs. Capcom 3.