And, oh, how my eyes widened to see that the 7th Guest and 11th Hour have been recently re-released for PC, courtesy of DotEmu [update: apparently headed for GoG soon too]. There is so much nostalgia here for those who started out playing PC games the likes of 7th Guest, 11th Hour and similar Sierra titles like the Shivers series. Damn you Stauf for taunting me! And damn you avatar for taunting… um… myself… “I’m going to have to start again” Ahhhhhh, the joyful bliss of sheer puzzle frustration and repeated failure. And that soundtrack… classic!

[edit: I had actually, although accidentally, originally written Faust instead of Stauf, the reference isn’t lost on me.]

I left a little piece of my childhood soul in that mansion.

Oh…. and the damn microscope game, the phrase written in cans without any vowels, and the tedium of the piano puzzle (luckily, I played piano at the time, and still remember the 7th guest theme to this day thanks to that puzzle). And the superimposed real actors on top of 3D environments!! This is one facet of the PC adventure era that I really miss. Just imagine how strange and bizzare modern dialog heavy games like Mass Effect or Uncharted would be if the cut scenes were rendered with real actors. [Seriously, can please someone make this happen, low-resolution digital actors superimposed on top of XVGA Normandy backgrounds?] There’s a certain campy-ness too it that will always hold a place in my imagination. I have nothing but love for these games. 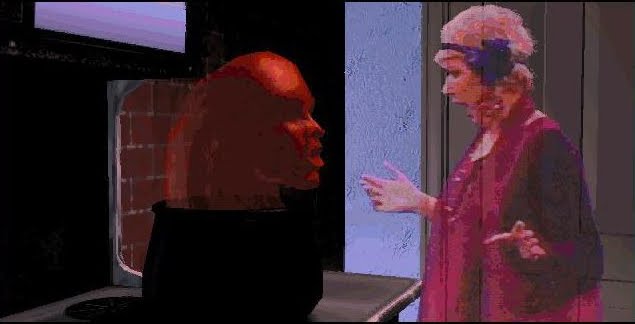 A little investigative work reveals that Trilobyte games is still very much alive and kicking. Recently releasing the 7th Guest for iOS this past November, and have a number of products “in the queue” including the 11th Hour (assuming iOS release), Tender Loving Care, and something innocuously referred to as 7th Guest III (le gasp!) .

The puzzles in the 11th Hour kept my friends and I up until all hours of the morning (including NA Matt), increasing our frustration and deepening my love of this series. Tender Loving Care, for those keeping tabs, is a surreal cerebral interactive narrative, bordering at times on Cinemax-level softcore tension as you investigate the tangled relationships of the game’s characters. Its difficult to explain if you’ve never seen it, and maybe the closest thing we have to it today is QuanticDream’s Heavy Rain, or Indigo Prophecy, despite some obvious disparities.

It’s comforting to know that fans of classic point and click adventures are not alone. Welcome Back, Trilobye, I’m desperately looking forward to The 7th Guest III: The Collector.

I took one for the team and sat through EA’s Summer Showcase to bring you this new DA information! Despite a poop-load of criticism, we loved DA2. While the limited environments were disappointing, the story, characters, and combat were otherwise excellent. Bioware listened to their critics and soon began working DA2: Legacy

Is social gaming really the future?

Say what you will about games like Farmville, Cityville and Heroinville, but they’ve become increasingly popular in recent years, and have even eclipsed massive AAA titles in terms of raw number of active players.

SOE announces that the long running and oft criticized MMO will end with a bang this year.