We were lucky enough to get in the good graces of Bethesda during PAX: East and were excited when they invited us to play Skyrim during the media only hour at PAX: Prime.  Behold!  A dramatic retelling of my time with The Elder Scrolls: Skyrim

First Impressions:  I was terrible at Skyrim… and terrible is putting it nicely. The first step in my epic adventure was character creation. I spent a few minutes cycling through the various races and gender. I have to say that I was immediately impressed with the variety, but I was told to not take too much time because raw adventure awaited me… outside.  I quickly selected an Orc (because they rule) and, from what I understand, possessed some sort of berzerker ability that I never quite figured out. A few moments after building my character and equipping his weapons (an axe and a long sword) I made my way out into the wilds. I was also told that the area we were playing with was not actually an area from the game, but a zone specifically built for demo purposes. The first thing I noticed about Skyrim is how large everything felt, there I was alone in this huge word with no guidance and no real motivation. 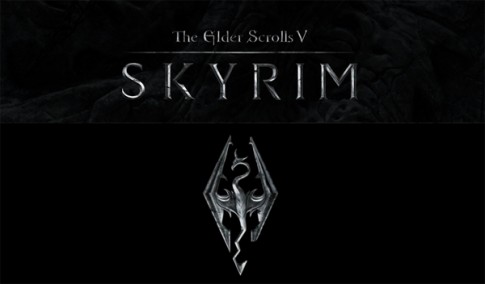 I can’t kill a caribou – My lvl 1 Orcish warrior combed the dense forest and soon came across a nice looking stream (a babbling brook if you will).  Wallowing in the river was a massive Caribou who seemed to be enjoying himself.  Hot-swapping to my longbow I fired a volley of arrows at my unsuspecting prey who seemed to shrug off my arrows as if he were wearing Caribou-Kevlar.  Then, for unknown reasons my game froze… total hard lock.

Now I’m a Lion-Man:   An employee quickly reset my game and allowed me to re-roll my avatar…I was told that we were playing an old build of the game which still a bit buggy.  This time I picked a cat-man who had the racial ability of “improved melee”.  Prowling around with big bushy tail I wandered into a nearby cave and and savagely attacked some hobo-looking bandits.  I felt a bit bad, but I only had a few more minutes to get some action in.  The melee system is fun and simple, especially at lvl 1 where I had very few options.  I could see the quality of gameplay improving as one advances through the narrative, and dual wield is always a lot of fun. 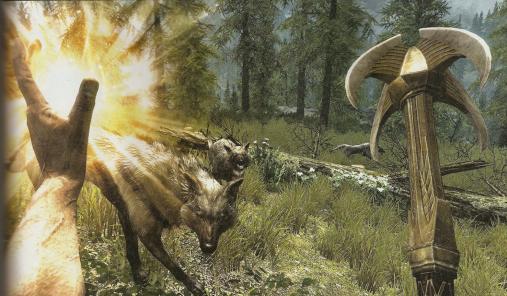 Next time Caribou... next time

Final Impressions: I firmly believe that Skyrim will be an amazing game.  With over 70 voice acted rolls and 120+ hours of gameplay, it should melt your brain into an RPG flavored goo.  The demo however was a bit lacking as the world felt incredibly empty (sans the swimming Caribou and the hobo-bandits).  I felt terribly weak and underpowered and died on several occasions during exploration.  I would have much rather played a later portion in the game with more abilities and story options unlocked.

A few weeks ago we put a quick blurb up on the site about Gears of War 3 writer Karen Traviss. We basically said that if her previous novels are anything like what we’ll be seeing in Gears of War 3, we’re in for a hell of a ride