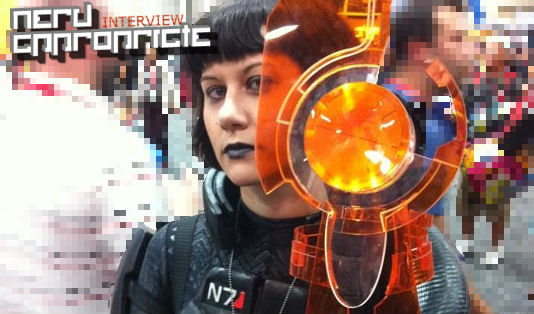 A few years ago I was wandering the floor of San Diego Comic-Con when I literally stopped in my tracks and did a double take. Standing in front of me were some of the most amazing Mass Effect inspired costumes I had ever seen.  It was during that moment that I realized the true power of cosplay.  Here I was, a grown man with a shit-eating grin on my face because my favorite characters were standing right in front of me in 3D.  I suppose it’s no different than a child finally getting to see Mikey Mouse at Disney World.  Deep inside, that kid probably knows that Mickey isn’t real, but that sure doesn’t take away from how that kid feels when he finally gets to see that giant rat in person.  Now I’ve never cosplayed a day in my life, but that sure doesn’t mean I don’t appreciate all the time and effort it takes to build some of those incredible costumes.  Cosplay is a key part of nerd culture, without it conventions wouldn’t have that incredible Halloween-like feeling that makes them so magical.  When I returned from San Diego that year I found out that the Mass Effect cosplayers went by the name Crabcat Industries and were co-created by one Holly Conrad. Unlike other Bioware fans, Holly was talented enough to catch the attention of Bioware, and even got to help out with an offical Mass Effect trailer earlier this year. Check out our conversation with Crabcat’s Holly Conrad!

NA-Ash: For those folks that didn’t get to attend Comic-Con, can you describe what your Comic-Con experience was like this year, and perhaps some of the things you did for Bioware?

Holly Conrad: This year was pretty awesome. We got to help at the BioWare base most of the time. We got everyone in and out of costume, we hosted an event, and I got to interview Jennifer Hale in my costume (which was totally a dream come true). Really I think it was the best Comic Con ever for Crabcat. It was hard work, but in the end we all really felt like it went amazing. One of my favorite moments was when we did the Mass Effect March, and we had Garrus sniping on the balcony of the Hilton while I yelled at the crowd “Humanity First!”  There’s really no words for getting to spend your day pretending to be a space hero with some of your best friends and a huge crowd of omni-blade wielding fans.

NA-Ash: While you didn’t participate in The SDCC Bioware costume contest, you got to judge the event along with Ali Hillis and Casey Hudson.  What was that experience like for you?

Holly Conrad:  Again, another dream come true. They are all amazing people, and really have a great sense of humor. Of course it’s also intimidating, sitting next to Liara I almost expected to be hit by a singularity when I wasn’t looking… 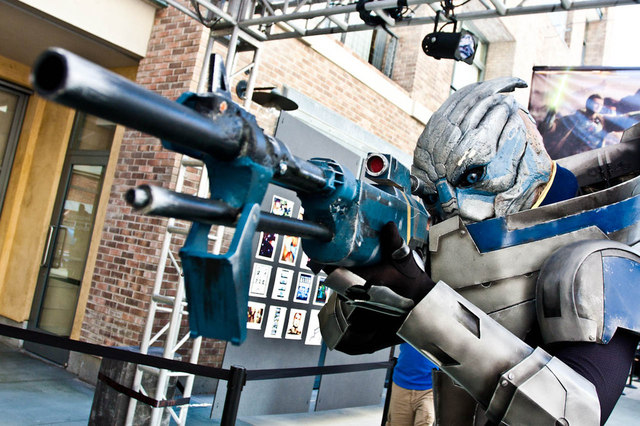 NA-Ash: Patrolling Comic-Con dressed as Commander Shepard must be a surreal experience. Do you have a favorite, or most bizarre fan encounter?

Holly Conrad:  I’ve actually been to a lot of conventions as Shepard now, and I have to say most of the time it’s pretty tame. I once had a guy ask me to pistol whip him, that was pretty awesome. I agreed, and then he told me he didn’t ACTUALLY want that. Renegade punch failure. One of my favorite encounters was at PAX last year when I had a young kid come up to me and call me “Commander” in a very shy voice, it was just adorable. Every picture and every fan encounter is amazing though, it’s always so flattering and a lot of fun.

NA-Ash: Even though making elaborate and often amazing costumes takes insane skill, why do you feel as though there is still a strange negative social stigma attached to cosplay?

Holly Conrad: If there is, it’s not a big deal and I’ve never encountered it. Cosplay is becoming more and more an art form and a respected hobby in America, and I think it’ll continue to grow. Or, I may just have no shame and not care if there’s a negative stigma, because doing what you love is more important than what people think.

NA-Ash: You seem to have a pretty amazing relationship with Bioware, how did they approach you to help out with the Mass Effect: Invasion trailer? Can you describe to our readers what all you did on the commercial?

Holly Conrad: The trailer was amazing! That was definitely an experience. We created the husk costumes, which you only see briefly, but they were fantastic. They were sculpted suits with LEDs running through them, and when the actors were in them I was nearly ready to hide behind a waist-high crate. When they were on set it was surreal. The whole set was decked out in Mass Effect writing, a downed helicopter, lights, everything. It was seriously like we were in the Mass Effect universe. I would love to do more things like that, it really brought the game to life.

NA-Ash: Rumor has it Crabcat industries will be attending this year’s PAX:Prime. Can you fill us in on what you all have planned for your panel?

Holly Conrad: Our panel this year is sort of a tongue-in-cheek non-costume costume contest. We really just want everyone to show up in costume, no matter what it is, and we’re going to have a show. It’s a lot more fan-interactive than out last few panels, so I think it’ll be really great, and be a place for cosplayers to show up and take pictures. And there are prizes! It’s Friday at 8:00 in the Unicorn theater.

NA-Ash: This whole “Fem-Shep” debacle has gotten a bit out of hand with articles like “Death To Blonde Shepard” generating a ton of press. Do you think it was wise for Bioware to allow their community to have so much power in choosing the appearance of such an iconic female?

“There’s really no words for getting to spend your day pretending to be a space hero with some of your best friends and a huge crowd of omni-blade wielding fans..”

Holly Conrad: Really I think that Shepard, whoever she/he is, can be anyone. They can have blonde hair, black hair, no hair, it really doesn’t matter. What matters is that they can be customized to be what you want them to be. I think that’s always been the most important factor of this whole debate. And I may joke around about blonde Shepard, but that’s only because I was biased, one of the possible looked was based off of my costume! Sadly she didn’t win, but she still looked awesome.

NA-Ash:Out of total curiosity what direction would you like to see the Mass-Effect franchise take after the release of Mass Effect 3? An MMO perhaps?

Holly Conrad: I’d love an MMO, though I would miss the story arc the most. I think any game set in the Mass Effect universe would be fantastic. I love the setting, maybe something involving more back story on the races. Turians preferably, I love Turians.

NA-Ash: Can you fill our readers in on the project you worked on with Morgan Spurlock, Comic-Con Episode IV: A Fan’s Hope?

Holly Conrad:  The movie premiers next month at TIFF in Toronto, you’ll have to wait to see the rest then (wink wink).

NA-Ash: Holly, thanks so much for chatting with us. We’ll see you on the floor of PAX for sure. Do you or Crabcat have any closing words of wisdom or any projects we should look out for?

Holly Conrad: I’m going to have a new female Shepard suit at PAX, look our for ME3 Shepard! Renegade style! Other than that, come to the panel and say hi, and don’t burn yourself on any heat guns. 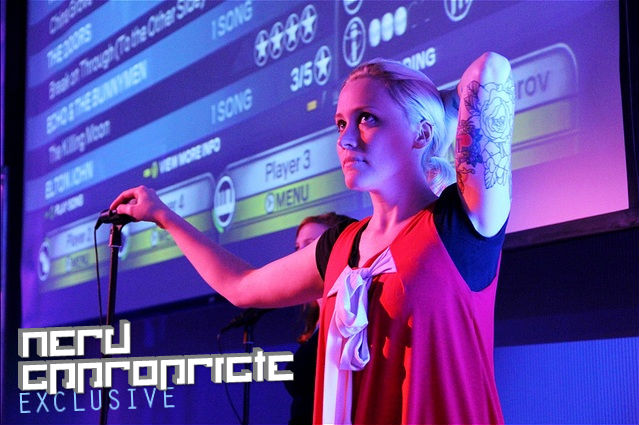 Allison Thresher: Talks “The ‘Other’ Us” (exclusive interview)

A few weeks ago Matt and I made our way up to PAX:East. It was a great adventure to say the least, and while there we witnessed one of the best panels we’d ever seen, The “Other” Us. The panel focused on gender, community, and the world of gaming in general. “The ‘other’ us” inspired us to write some articles that hopefully you’ve had a chance to read (Ash and Matt) by now. The mastermind behind the panel was one Allison Thresher, former CM turned junior choreographer at Harmonix. I had the pleasure of talking with Allison about the panel, gender in gaming, PAX Pox, and other shenanigans. Enjoy!

Fans of M.T.V. rejoice! This week, Ash talks to Sarah Rice from the Braincandy Podcast…