It is safe to say that I’m the resident Nintendo guy around the NA headquarters. That being said, I decided to check out Wii Play Motion and FlingSmash for a number of reasons: I wanted a motion plus controller (you know, in case there is a reason to have one for Wii U), I needed to sure up my platinum status with Club Nintendo, and i was able to acquire these games relatively cheaply through some shrewd transactions.

When we talk about the Wii peripherals, the Kinect, or the Move as gimicky or whatnot — call it what you like — I actually like exploring and trying these new play options. I’m starting to worry that modern controllers with “triggers” presuppose the games that can be created for them and, frankly, stifle developer creativity when combined with market trends. I do have a limit though –> DK bongos… $30 for two buttons… I can’t go for that, no can do. Anyhow, I thought it would be interesting to review Wii Play Motion and FlingSmash games together… and within the context of this gaming community at large. The landscape has changed, Wii is not the only horse in this race anymore when it comes to novel interactions / interfaces.

Both FlingSmash and Wii Play Motion were sold as bundles with Wii Remote controllers with built in Motion Plus… and while were on the subject, it was kinda a dick move to sell Wii Sports Resort with the motion plus adapter when anyone could have forseen the integration of the two into one unit… but I digest (veiled Family Guy reference). 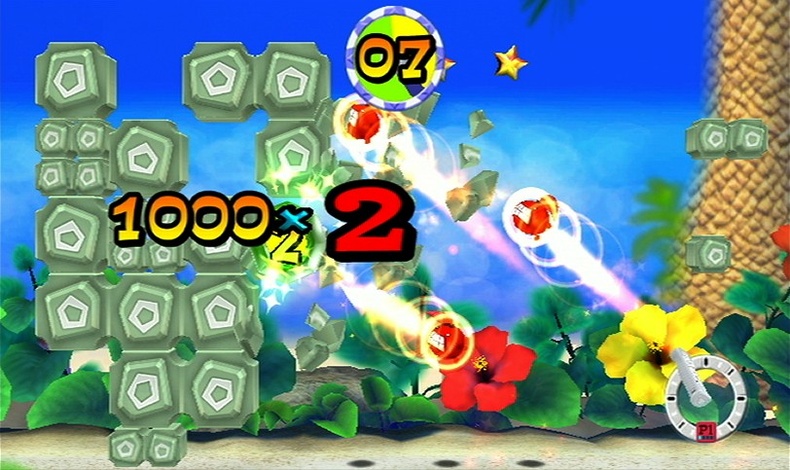 In a nutshell, FlingSmash might be best described as a moving platformer of sorts, combined with elements of racketball or breakout. You control your character by whacking him (racket style) into blocks in the environment, which allow him to progress through the stages and collect medals scattered about the environment. The screen is constantly moving, however, like those annoying levels found in Mario platformers — but here it is necessary, as there would be little challenge if you had all the time you’d like to smash things up.  In order to progress through each stage you must collect 3 medals. There are a few stages per each of the 6 worlds, with a boss battle capping off each world.

It’s actually quite a bit of fun… for about an hour or so. Yes, each world introduces a new gameplay wrinkle, but I pretty much got the gist of the game after the first four worlds or so. It just didn’t hold my attention, and here’s why: presentation. In my opinion, the styling and characters feel a bit uninspired. The cut scenes are like motion comics with no audio (subtitles). The main protagonist is a little ball with troll hair named, Zip. Now, I get the whole Nintendo games geared at families as much as the next person, but I couldn’t imagine these characters resonating with anyone. This game was developed by a 3rd party for Nintendo, but why not just slap Kirby or Mario on this thing. Swinging the remote like a bat to smash blocks is a clever idea, but I didn’t feel inspired to keep going through this.

WPM is a more recent release. FlingSmash came out in November 2010, while Wii Play Motion came out within the past month.  This game follows up the previous Wii Play, which introduced us to some casual / non-sport games for the then new Wii system. I remember really liking the original Wii Play… that game had Billiards, Ping Pong, a tank game that reminded me of tron, and a competitive target shooting mode inspired by Duck Hunt. While the graphics and technology take a step forward in Wii Play Motion, I feel like the overall quality of the games took a step back. This I find confusing since Wii Play was one of the better selling titles on the Wii.

Like the original, WPM begins with only a handfull of the 12 mini games unlocked. You are required to play through the first few games in order to unlock the latter ones. So the first game I play is one where my Mii has to balance a giant ice cream cone while scoops are stacked on top of it. What happened to Billiards? I tried a game where I had to see how far I could skip a stone, ok sure, but this is a pretty simple mechanic holding the Wii Remote flat while swinging. Up next, Target Shooting… Yes I thought… except now with Motion Plus the game makes you shoot things that are off screen (?!) by sort of moving the remote to the side of the TV to move the camera. I found myself using the remote to move the reticule, but never really “aiming” at anything like I did in the previous version. There’s a labyrinth style game where you move a marble through a course by tilting the remote. This was fun, but I kept thinking that this is something I could play on a SmartPhone. And, that’s when I started to realize that the Wii is competing in a different world now than it did when it first came out. 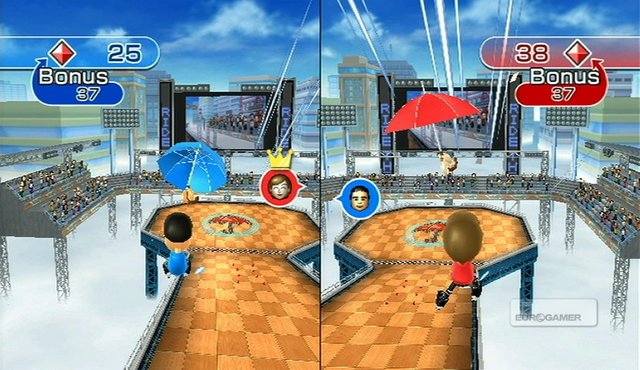 There are a few interesting games including a ghost hunt game, where Mii’s on screen point to locations of Ghosts off screen. You then need to capture them by listening to the Wii Remote Speaker (another severely under utilized feature of the Wii) and pointing around your play space to find them. There’s also a racing game where you control an umbrella and get swept around the course. A great idea, but one of the last games unlocked in WPM. There are a few other gems, but I think you get the idea by now.

The Game Has Changed

So here’s the rub. I don’t know that these types of games can really sustain in the current gaming climate. I had a stack of Wii Peripherals that I gladly used until I saw what was possible with the Kinect. The blessing and curse of Nintendo is that their technology is sometimes so specialized that they are the only ones that can truly use it to the full potential. Even then, you’d have to make sure someone owned a Wii Zapper AND Balance Board or whatever combination of things necessary. Harmonix already has a hit on their hands with Dance Central for the Kinect, and clearly there is support for this coming down the stream in terms of a firmware update to improve the tracking. Imagine being able to flash your Wii Remote to make it better… the game has changed. 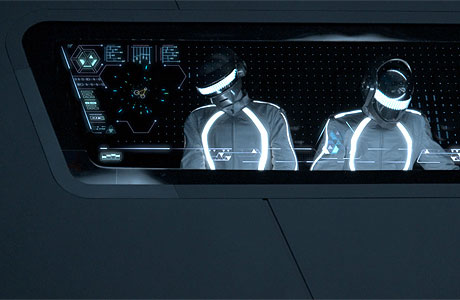 The game has changed

The Kinect, other than being on top of the TV, doesn’t take up space like two Wii Zappers, two Classic Controllers, 4 Wii Remotes, 2 Motion Plus Adapters, and a Balance Board do. Seems appropriate that Wired just posted a photo series of dusty Wii peripherals just days ago. That’s a little harsh, but I think it makes a point. Not to beat a dead horse, but in order to entertain the idea of something like a Wii Play motion Nintendo needs to come out swinging… literally, Where’s Zelda already? Didn’t I see an archery game in Wii Sports Resort — Kid Icarus anyone? It’s a tough sell now. Two years ago Wii Play Motion would have been a hot commodity, now I’m not so sure this would appeal to any multi-console home. And while were at it, how about you work on some 3DS games for that $250 paper weight that’s collecting dust in my den.

I hate to be hard on a brand that has been so good to me through the years, but there you have it. There’s been competition before, but maybe not like this. And I’ll surely buy a Wii U, but I hope you realize that you own some of the most popular game franchises in the world, stop reamking old games, start using those IPs and get back to making some wicked awesome gaming experiences.

Now if you’ll excuse me, I’ll be waiting by the mailbox for Wipeout Kinect to show up at the door.