I’ve grown to LOVE this series, but like a lot of fans I wasn’t always on board. Like many old-school Star Wars fans I was a bit reluctant to hop on the Clone Wars bandwagon. Originally intended as a vehicle to introduce The Star Wars universe to a new generation of kids, The Clone Wars turned a lot of Star Wars fanatics away due to the general misconception that is was juvenile and uninspired. Fastforward a few years and I have to say that season 3 of the Clone Wars was one of the best adventures I’ve ever witnessed on television. Season three ends not with a bang or a whimper, but a low guttural Wookie growl!

Does it have The Force?

Initially, something felt a bit “off” with the Clone Wars, almost as if they didn’t really know what they wanted to do with the series. The same thing happens with every show, and its why I always say the pilot episode is typically the worst episode of a series. Why is this? Well the director, actors, and crew are still working out the kinks and figuring out how to make the best product possible. Because The Clone Wars released their pilot theatrically, many Star Wars fans openly dismissed the series as being “silly” or “childish”. My response to them: You’re into Star Wars hotshot, it’s supposed to be fun and silly… Get over yourself. The new season of The Clone Wars has had more action, mystery, and death than episodes 1-6 combined, including the part where Anakin kills all those poor Tusken kids. Now before the internet tears me some new face-holes, I love the original trilogy, and I grew up watching Star Wars. Like most of you out there I have incredibly vivd memories of seeing Return of the Jedi in the theaters and waiting all day in line to see Attack of the Clones. The Star Wars universe is a special one, and people hold it very close to their hearts. The Clone Wars just makes it better.

Can the Clone Wars go on forever? Sadly no, but only Mr. Lucas knows when the series will end. From a military perspective neither faction has made much headway in terms of “winning” this massive War. Both sides have suffered major losses, and appear to be acting out of desperation. During an important battle Anakin’s padawan Ahsoka vanishes without a trace. She awakens to find herself inside a dank cargo vessel along with several other captives. Her lightsabers are gone, and her communicator has been destroyed. At this point Ahsoka is just a teenage girl on her own. Oh yeah, she happens to be personally trained by Darth Vader…no big deal. Ahsoka’s journey from the annoying “snips”, to the almost-Jedi she is now is really the heart of the story. Much to my surprise, Ahsoka has grown to become my favorite character. I personally blame her voice actress Ashley Eckstein for making Ahsoka so likable and strong. Ahsoka kicks some serious ass. 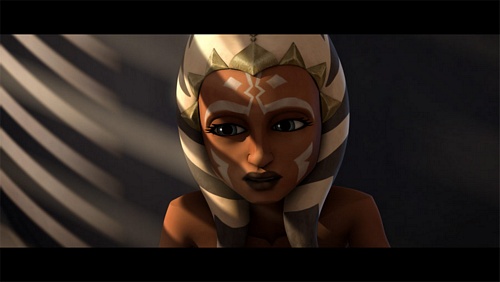 No light sabers? No biggie... trained by Vader.

Ahsoka and the rest of the captives are dropped off on abandoned forest moon in order to be brutally hunted by Trandoshan big game hunters (think Predators). Within the first few moments most of the captives are dead, unlike stormtroopers these Trandoshans can apparently aim quite well. Soon Ashoka encouters a small band of Jedi Padawans who have been in hiding for ages, and are afriad to fight back. Without giving too much away, I’d like you to watch this video clip.

That’s right, Chewbacca! Many people my age have lost the ability to “feel magic”, but I’m happy to say that watching a young Chewbacca battle along-side Ahsoka was nothing short of wizard (we can still make this word popular!). In all sincerity, The Clone Wars has made me feel that same Star Wars “magic” that I experienced back when I was a youngling.

So I challenge you! If you dismissed Star Wars: The Clone Wars and never bothered to watch it, pick it up on Blu-Ray, and let me know if you too still feel that magic. My money is on “yes”. 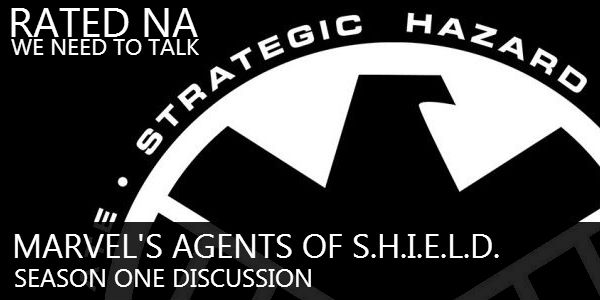 Star Wars: The Clone Wars – The War is Finally Over

If this is sign of things to come in terms the level of quality of Hulu’s original programming, than we’re all in luck.  The world of television changing for the better.  It’s good to see that the days of wasted channels (the ocho) and junk-food television consumption are coming to an end.  If more companies like Hulu and Netflix start to provide quality material like Battleground, we’re on the way to some real television Democracy… And that’s just awesome.