Guess what?  Workaholics is a hit! I have some more good news, episode 3 drops tomorrow!  Comedy Central was cool enough to show us the first three episodes of Workaholics and I must say that episode three is by far my favorite.  Office Camp Out is a surreal homage to both Die Hard and Home Alone.  It takes a lot to make me laugh out loud, and I can honestly say that I may have “piddled” a little during this episode.  By the way, did you read our interview last week with Kyle and Adam?  If not check it out HERE.  They’re funny guys that deserve to have their words read.

The guys decide to crash at the office for a little “office camp out” while their house is fumigated, but their camp out is threatened when two burglars break into the office. 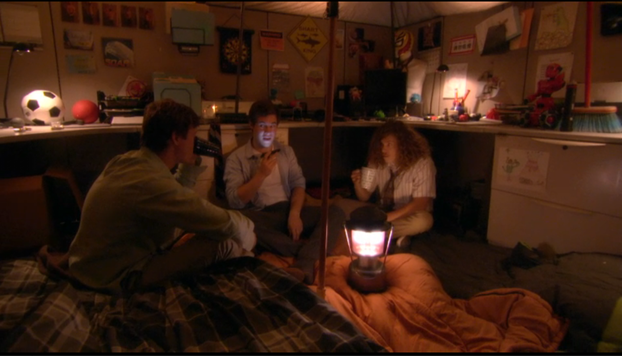 Adam Devine started his career in stand-up comedy after graduating high school in Omaha, Nebraska.   After two short years in the business, Devine was asked to perform in the “New Faces” show at the Montreal Comedy Festival.  Shortly after the festival, he was cast opposite Jon Heder and Diane Keaton in the Warner Bros. movie, “Mama’s Boy.”  He appeared on COMEDY CENTRAL’s “Live at Gotham” and also appeared on TBS’ “Frank TV” and ABC’s “Better Off Ted.”  He can currently be seen as a recurring guest-star on ABC’s “Samantha Who?”  Devine acts, writes and produces all of Mail Order Comedy’s material.

Anders Holm grew up in Evanston, Illinois and graduated from the University of Wisconsin – Madison.  After college, he moved to Los Angeles to pursue writing where he performed and wrote sketch comedy for Second City LA and Upright Citizens Brigade.  Holm has toured the country as part of the National Lampoon Lemmings.  His writing credits include the writers’ assistant on Fox’s “Bones,” and the head writer’s assistant on HBO’s “Real Time with Bill Maher.”  Holm’s acts, writes and produces all of Mail Order Comedy’s material.

Blake Anderson grew up in Northern California where he performed improv and sketch comedy.  He moved to Los Angeles where he studied at The Groundlings and Upright Citizens Brigade and toured the country as part of the National Lampoon Lemmings.  Anderson has been seen in commercials for Snickers and McDonald’s as well as on MyspaceTV’s hidden camera show, “Special Delivery,” where he was a fan favorite with one of his videos earning more than one million hits.  He acts, writes and produces all of Mail Order Comedy’s material.

Kyle Newacheck grew up in Northern California and graduated from The Los Angeles Film School with a degree in editing.  He worked in many facets of the industry, but his preference for comedy prevailed.  Newacheck is a director, editor, producer and writer who worked for Myspace TV, National Lampoon and Super Delux.  He, along with Adam Devine, Anders Holm and Blake Anderson, created Mail Order Comedy.  Newacheck currently directs, edits and produces all of Mail Order Comedy’s material.  He is currently editing a feature length film that is directed by Shira Piven and executive produced by Adam McKay and Will Ferrell.  He also produced his first album using Mail Order Comedy’s alter egos, “The Wizards” and taught at LA Film School.

How a show can swell your heart and make you laugh, all with D&D

We've said it numerous times before, but Community is the best show on TV right…

I have been an owner of an Amazon Prime account for about 2 years now.…