Last week (4/6/2011) was the premiere of Comedy Central’s new series Workaholics and we had the pleasure of talking with series director Kyle Newacheck.  This week comedian Adam Devine gets around to answering our questions about life, comedy, and battles to the death. Adam is also one of the proud members of the Mail Order Comedy team, and steals most of his scenes in Workaholics. Having seen the first handful of episodes I can honestly say that if you’re a fan of crude/bizzaro humor, you may have found your new favorite show.  By the third episode, the gang is saving their telemarketing office from “terrorists” by building a series of elaborate traps that would make even Kevin McCalister jealous; it’s crude, it’s gross, it’s simply funny as hell.

Press release: Just because you’ve left college doesn’t mean you can’t take the party with you. For three post-grad pals trying to make their way in the real world, the revelry continues all day and night, whether they’re in their office cubicles grinding out a paycheck or back at their house partying it all away! Blake Anderson, Adam Devine and Anders Holm star in “Workaholics ,” COMEDY CENTRAL’s newest half-hour scripted series, premiering on Wednesday, April 6 at 10:30 p.m.

From the minds of the hilarious and irreverent Internet sketch group Mail Order Comedy, “Workaholics” is a single camera comedy featuring three friends who work together as telemarketers from 9 to 5 and live together from 5 to 9. Dress codes, deadlines and waking up before noon are not things these guys are used to. They do their jobs and sometimes they even do them well, but they show up late, leave drunk and always live for the day…even if they don’t know what day it is. Co-created by Mail Order Comedy’s Blake Anderson, Adam Devine, Anders Holm and Kyle Newacheck and 5th Year’s Dominic Russo and Connor Pritchard, the series stars Anderson, Devine and Holm and is directed by Newacheck and Chris Koch (“Modern Family”). Kevin Etten serves as the show runner.

NA-Ash:  Thanks for taking some time to talk with us guys.  We’ve seen the first handful of episodes of Workaholics and think they’re funny as hell.  How excited are you for the April 6th premiere?  Nervous at all?

Kyle: I am very excited for the premiere.  I can’t wait for people to watch it, we’ve been waiting quite awhile for it to happen so I’m not that nervous, just anxious to see how people receive it.

Adam: I am excited as FUCK. Only curse words can describe my level of excitement. I’m not nervous. If I thought the show blew then I’d be nervous.

NA-Ash: Well I think it’s damn funny good sir!  Now a good deal of the show seems to be improvised; do you guys typically stick with the script or just “go for it”?

Adam: We make sure we have good takes of what was written and then do a couple of takes where we take it to weird town. We usually use the weird stuff. Its fun being the boss and having the freedom to try something in a weird different way. I’d say forty percent of the show is completely improvised.

Kyle: We go into every episode and every scene with a solid script, but sometimes it doesn’t work or someone has a funnier way to approach the scene so we try it.  The rule of thumb is, if it still serves the story and is funnier, then we do it.   Sometimes we just run it for 8 takes and then it gets weird… that’s my favorite stuff.

NA-Ash:  Being a huge fan of vulgarity, I love how raunchy you all get.  Nearly every “unmentionable” is mentioned at least once in the very first episode.  Are you guys this demented off of the show?

Adam: Yeah, we all grew up on rated R movies and NWA. This is just how we are. 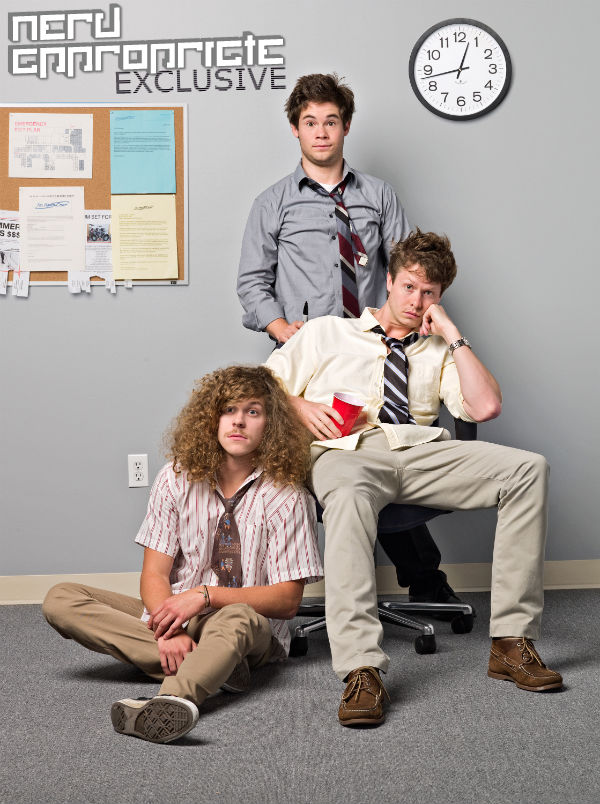 Kyle: My last name is tough to pronounce, even though its incredibly phonetic, so when telemarketers would call and ask for Mr. “Nowoncheck”, I would give them three chances to pronounce it right and then they could talk to my dad, I don’t remember it ever happening.  Idiots.

Adam: I used to be a telemarketer myself so I’m pretty nice to them when they call. Its amazing how mean people can be, supposedly my first two children will be murdered and I did catch a few blow horns to the ear.

NA-Ash:  You have the daunting task of directing this band of misfits.  What aspect of your job do you find to be the most challenging?

Kyle: I think the most challenging aspect of my job is balancing the comedy with the logistics.  Sometimes we’ll write something big and funny, and then I need to take it to production and find a way to make it work with the budget and the time constraints.  Being a start up show, I faced many challenges trying to pull off certain shots and stunts.  For the record, I like those types of challenges.

Adam: Kyle is a good director and I hope someday he gets to direct something with explosions.

NA-Ash: Scenario: You and Adam enter a dimly lit dojo; an old Asian man bows before you and slowly ushers you toward the center of the room.  The ancient man states that in order to leave the dojo alive, you must battle to the death.  Two men enter… one man leaves… What happens next?

Kyle: I swing at Adam, miss, then he climbs up my body and puts me in a koala clutch until I submit.  (This exact thing happened one night when we were hammered).

Adam: The old asian man backs up for dramatic effect and trips down a 30 stair stone staircase. The two dudes decide not to fight to the death and go drink goldschlager at a college bar instead.

NA-Ash: Some terribly nightmarish things happen to the characters on Workaholics; urine in the face, pretzels jammed into ear canals, and rogue sexts. These poor characters can’t seem to escape utter humiliation.  Honestly, where the hell do you guys come up with this stuff?

Adam: A lot of the stuff on the show is based in reality. Either it has happened to us or someone we know.

NA-Ash:  This being NerdAppropriate.com we love to ask what “nerdy” things people are into.  Is there anything about yourselves you’re almost too embarrassed to share?

Adam:I LOVE pez. I have a real serious collection at my parents house. I leave it there in case I ever have a girl over. I don’t but just in case.

Kyle: I’m really into Mythbusters.  And iPads.  And I used to watch wrestling religiously.

NA-Ash: I too watched a fair share of WWF as a kid, don’t tell.  We wish you tons of luck on the new show, and we’ll be tuning in for sure.  Any final thoughts or sage like advice for our readers?

You can catch an all new episode of Workaholics , tonight April 13th at 10:30 p.m on Comedy Central!

How to fail at going digital 101: The NFL

The news out of the websphere is a new deal that DirecTV, the NFL and…