Why is this a big deal?

Rumor has it that Vancouver Based Slant 6 is working on a new Resident Evil game tentatively titled Resident Evil: Racoon City. Most people that play video games have at one time in their lives played a Capcom game. Capcom has been around forever, and have thankfully brought us famous titles like: Ghosts and Goblins, Street Fighter II, Megaman, Marvel Vs. Capcom, and of course Resident Evil. In the 1980s and the 1990s Capcom did the smart thing and aggressivlety captured the best talent in Japan to in turn become the most innovative and widely respected studio in the region.

So why change the formula?

"It was like putting a Ferarrai sticker on La Baron convertible and expecting people not to notice that they're different cars."

Money.. Plain and simple. In recent years Capcom has struggled to make the same sort of money in the West as it did in Japan (Monster Hunter sold over 3 bazillion copies!).  Capcom then decided to buy small Western studios and farm out its licenses to Western developers.  It was their hope that this formula would generate more cash, and some more western fans. The big problem is a lot of the “Capcom” games produced out of Japan received less than stellar reviews and no where near the quality of “actual” Capcom games. It was like putting a Ferarrai sticker on La Baron convertible and expecting people not to notice that they’re different cars.

According to more rumor and speculation, RE:RC will be a squad based survival horror game that takes place during the fall of Raccoon city.  This sounds like it could be a lot of fun, and Slant Six is known for making games like this.  Maybe we’ll see something about it at PAX East this March.

I recently contacted Slant Six to get some hints as to what they’re actually producing and have not yet heard back. Will let you know if they reply. 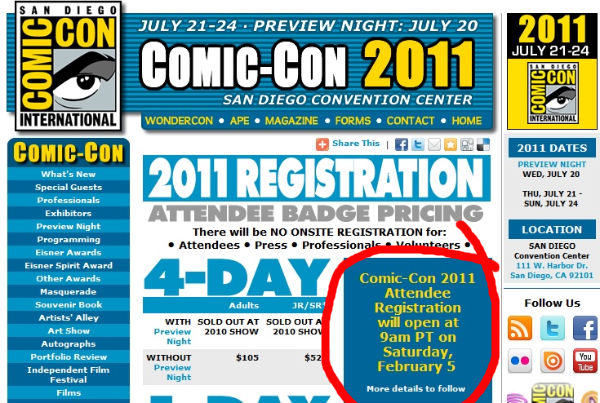 Comic Con 2011 tickets about to go on sale: prepare for battle *fixed*

Comic Con 2011 tickets go on sale this Saturday Feb 5th at 9:00am PST. Get your six shooters ready because that’s high noon (EST) for us East coasters.

Buying Super Castlevania IV from the virtual console should have been the second thing you did with the Wii. The first, of course, was figuring out how to cheat the system at Wii Sports bowling. SCIV first hit store shelves in December 1991, and 19 years later, it still offers excellent platforming and one of the best soundtracks in gaming. Be sure to check out the music tribute video toward the end.