With SWTOR slated for Q1 2011 many of us are already within its “force grip”, so to speak. I have friends that ask me on a weekly basis what class and specialization I plan on playing, so I figured I may as well make a list for those that haven’t yet decided what to roll. Enjoy my insomnia.  Big thanks to SWTOR’S main site as well as Wookiepedia.com for helping me compile this information at the crack of dawn.

Consular seems to favor light armor and can wield a “Darth Maul” style double bladed light saber.  They appear to be of the DPS or support/healing variety depending on how you spec later in your career.  That being said, I think all Consulars can heal regardless of specialization. “Concentrating on mental refinement through study and meditation, Consulars sought to perfect the art of diplomacy and mediation, hoping to calm a tense situation or mend hurt feelings through civil discourse, reasoning, and parley, rather than drawing their lightsabers and cutting down an attacker.” 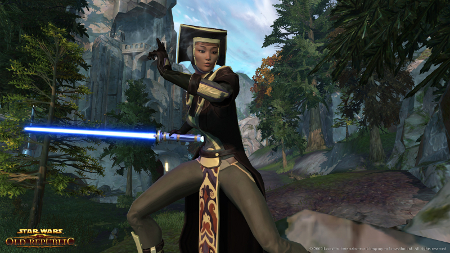 Both the "Priest" and "Rogue" class.. neat

The old standby.  What kid (or adult) has not wanted to be a Jedi Knight at least once in their lives?  Jedi Knights often wear the traditional Jedi robes, but can also wear heavy armor when going into battle (Think Kenobi with his trooper armor on during the Clone Wars) .  From what I gather Jedi Knights wield a single light saber, but can duel wield when they specialize. In terms of roles, they seem to be both TANK and DPS depeding on advanced class choice.

The kids that didn’t want to be a Jedi Knight wanted to be Han Solo.  From what I understand SWTOR places you in control of one of the most respected smugglers in the galaxy.  A true rogue class for those that like quick and stealthy gameplay and probably living in the moral gray.  The part I find to be the most exciting is that Smugglers get their own cover mechanic.  So unlike many of the other classes that have to wade into battle, the smuggler can dip in and out of shadows behind cover… cool!  DPS and support roles. 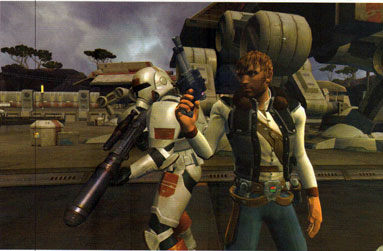 I don’t think that many people were excited about the Trooper class until that last trailer dropped.  Playing the story from the perspective of the best solider in the Republic may indeed be an amazing adventure (+ Jennifer Hale! ).  The trooper will be a hearty ranged DPS class that has the capacity to Tank if you choose the Vanguard class.  So your choices will be, dealing massive damage, or taking massive damage. 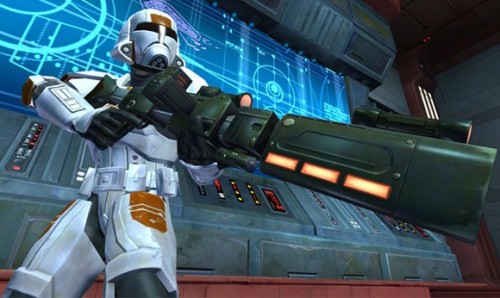 No doubt destined to be a mega popular class the term “bounty hunter” was made cool by Star Wars and Star Wars alone.  Iconic characters such as IG-88, Aura Sing, and Boba Fett radiate cool and badassery.  Who doesn’t want to fly around the galaxy working for the highest bidder and have no moral code?  In terms of game play Bounty Hunters appear to slide into the ranged DPS and Tanking archtypes.  That being said, they also appear to have a variety of support roles on the battlefield…oh, and they can fly.

Imperial agent is the “rogue” class for Sith Empire.  Utilizing sneak attacks, stealth and gadgetry, Imperial agents will fill the roll DPS and support while grouping.  Depending on which path you choose an Imperial Agent can rain down orbital strikes, or use a stealth generator to get in close and break necks personally.  Imperial Agents can also generate cover and utilize a similar cover mechanic to the smuggler.  Something tells me this class will just be a lot of fun. 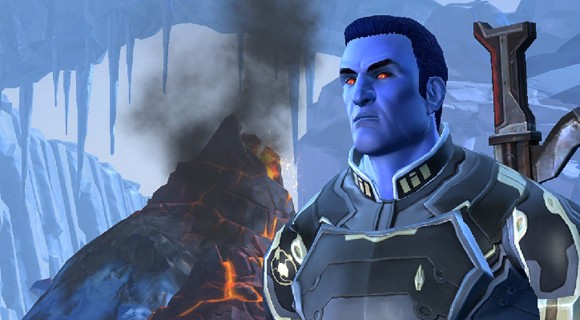 Not a Dark Elf... I promise

More Darth Sidious than Darth Vader, the Sith Inquisitor will be a lightly armored DPS machine that can use both ranged force powers and light saber combat.  However, my money is on them not being able to take a ton of damage on the battlefield.  This class should probably be chosen by those who like to inflict as much pain as possible.  Sith Inquistors will also have access to duel bladed lightsabers and according to wookiepedia “Sith Inquisitors were able to drain life from their opponents and use Force Lightning, but were also skilled with the lightsaber. They were known for their ability to spread fear and terrorize their opponents simply with their presence”

The Wizard and Rogue class mushed into one.

Darth Vader, Darth Bane, Darth Maul, Darth Tyrannus…  You too can be a Darth.  The Sith warrior will be a heavy armor wearing melee machine that can either be melee DPS or a Tank.  If you have fantasies of force throwing and force choking your enemies into submission, than this will probably be your class.  While at first glance they don’t appear to have much in terms of “bells and whistles”, what they do excel at is light saber combat and being tough as nails.

Wrap Up – So there you have it.  The basic classes of SWTOR.  There are many other factors to include when picking your class.  Things such as race, cross faction communication, companion usage, skill trees, and more.   So who are you going to play?  We’re dying to find out.

Gears of War 3: War-pigs trailer – We break it down!

By now you’ve probably seen the stellar video for the Gears of War 3 campaign, lovingly referred to as “The War-pigs Trailer“.. If you haven’t.. please, check it out below. Since things happen so fast I decided to break down the trailer and explain it all scene by scene – Here goes!