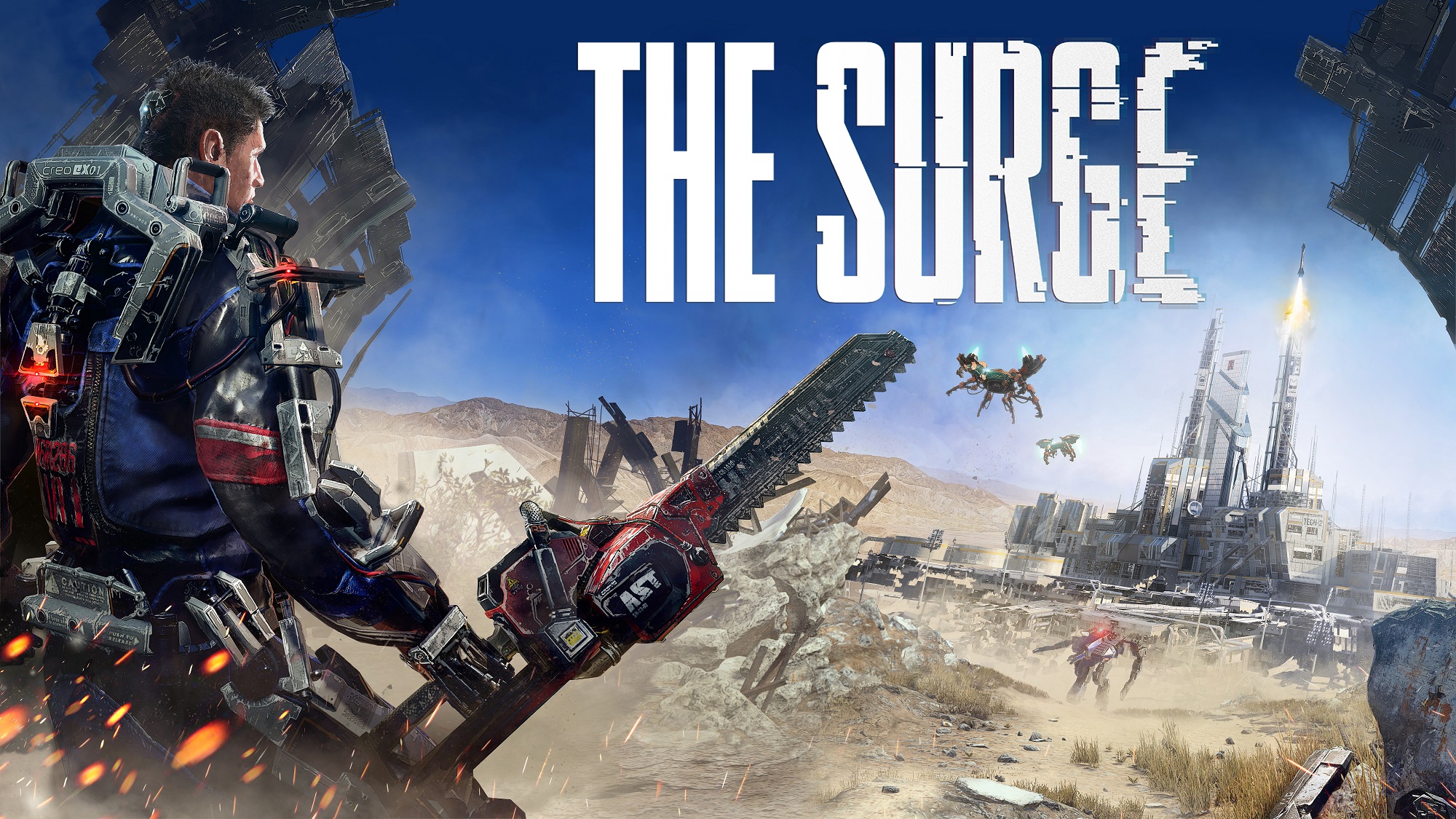 The Surge is a melee-action combat game from developer Deck13 Interactive and published by Focus Home Interactive. Deck13 might be best known for their prior title Lords of the Fallen. That and The Surge share DNA with other “hardcore” action titles such as Dark Souls or Nioh. The Surge, however, takes place in a dystopian techno-future in which resources are scarce, cybernetics has run amok, and humans are forced into labor to fight for scraps.

The great thing about The Surge, for me at least, is that I have never played any of the related games in the genre. I’m a sci-fi guy, and was interested purely in the setting as well as the melee combat, having previously played mostly shooters and platformers. The Surge is definitely a welcome change. Let’s get into it as we play as Warren, whose first day on the job for a shady techno-industrial / research company does not go exactly as planned… 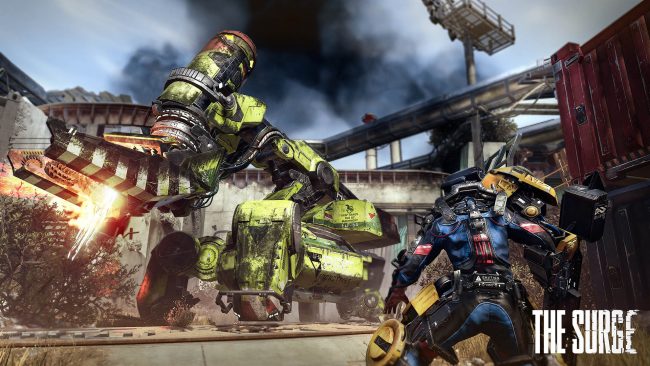 For readers familiar with these types of games, the gameplay tips you’ll find within will likely be old news. However, my initial impressions with the game are very positive. If you have played these types of games before, you’ll certainty enjoy the challenge of The Surge. The games’ brutal opening is a dark juxtaposition to The Surge’s otherwise colorful visual palette. The melee combat is fast and fluid, but timing, positioning, and strategy are important. This isn’t a button masher — there are separate buttons for horizontal and vertical attacks, and enemies body parts can be specifically targeted (arms, head, legs, etc.). Dismembering certain body parts, when successful, activates some great slow-motion execution sequences. These actions also yield useful materials that are used to level up the various augmentations on your character.

Under the hood, the game has some RPG roots. You can customize each individual part of your armor set (or Rig) to suit your playstyle. The Surge also has a great variety of weapons to match, including dual-wield, Rig mounted, single, and double-handed options. Many of these weapons can be found by… wait for it… dismembering those parts of your enemies. After nearly 10 hours it is sill satisfying. 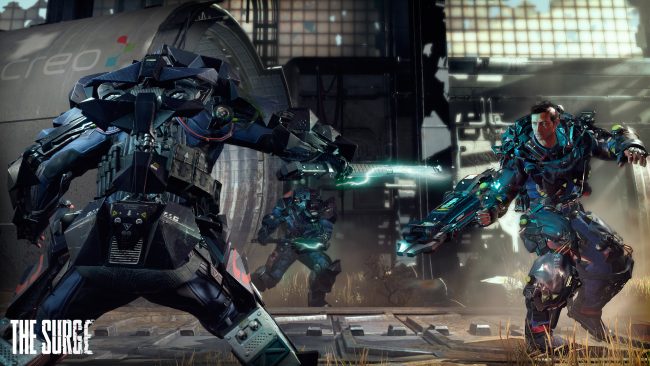 From what I gather, what makes this a Souls type game is its punishing difficulty. You’ll play through the same sections of levels over and over, gathering resources, leveling up at your base, and heading back out to build your power. Scrap is the primary currency that is used to upgrade yourself and your gear. Die in the open world and you’ll lose all the scrap that you’re carrying. The next time you spawn at your base, you’ll have a limited amount of time to retrieve the currency, and then it is lost forever. Of course, all of the enemies will respawn… so good luck with that.

Another early standout aspect of The Surge are the augmentations (think Deus Ex). Augmentations are extremely meaningful and can turn the balance against hordes of enemies. For instance, early on you can find an augmentation that will restore a bit of health when performing an execution. This is invaluable in the game’s initial stages, as your other option is a 3 time use med injectable (only refillable when visiting your base of Operations). Other augments help to maintain energy (for executions and abilities), restore health, increase damage, and so on. 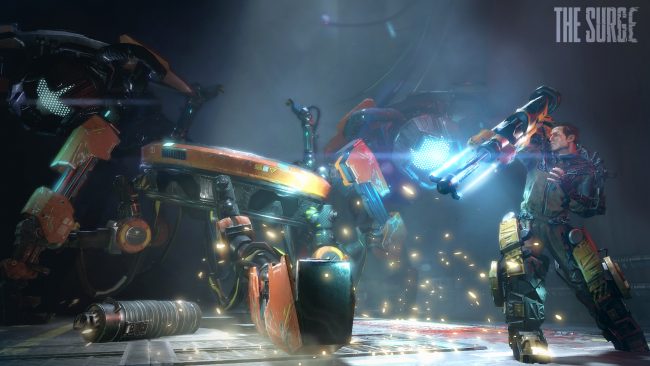 Going into The Surge mostly blind, I will say that you may find yourself lost at times… knowing what you want to do, but either to weak, or not sure how to do it. Though, this just adds to the sense of accomplishment when you finally figure something out, like unlocking a new door, finding a switch, or picking up a new piece of gear. Each piece of the puzzle pushes you slightly further into the world of The Surge, and I look forward to the challenges to come.

For newcomers to The Surge, or games like this in general, I offer the following tips (that I’d wish I’d known right from the start)

Bank your Scrap… Your adventure starts in Operations, which includes an upgrade station and a med station. At either station you can “bank” all the scrap you have acquired so that you won’t lose it if you die.

But consider your multiplier. Killing enemies in the world will build your scrap multiplier, the multiplier resets when you visit the med station or die. So, if you’re looking to acquire a lot of scrap quickly, take augmentations that will boost your longevity, and stay out there as long as you can. Grab your pitchfork and get to farming!

An augmentation for every occasion. Some augments can be swapped anytime, while others are “hard-wired” meaning they can only be changed at the med station. Think about what you are setting out to accomplish, and match your augmentations to the situation. For instance, you don’t need the augment that displays enemy health bars when fighting bosses because, well, it’s already shown by default. Alternatively, if you’re heading out to slice off some limbs for upgrade materials, consider extending your energy so that you can get to Executions more quickly. 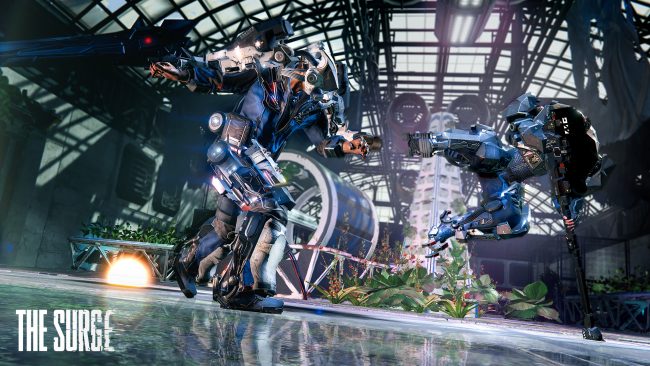 Explore! One of the main things you’ll be doing in this game is exploring. There’s no mini-map so you’re left to figure that out yourself. Wooden crates are destructible, and often hide items and alternate paths. Alternate paths often lead to doors which can be unlocked to create shortcuts back to your base. Each time you leave the base, try to push out a little further to find these shortcuts… and check every nook and cranny along the way for goodies.

Menus and menus. There is a lot of UI to take in initially, and each UI does something slightly different. The gear station is for crafting and upgrades, the med bay upgrades your core power, as well as switches rigs and augmentations. Finally, there is an inventory menu under the “select” button where you actually equip gear, and manage consumable inventory. Thankfully there is contextual help on each screen, but somewhere in the middle hours of my gameplay experience I forgot to equip the armor I was crafting/upgrading. You can also break down junk items for scrap here, as well as change out your weapons (on the fly).

Fighting. Your mileage may vary, but I feel like agility is the name of the game here. Yes, there are some heavy weapons, but the extra damage is no tradeoff for being able to quickly evade from danger. Fighting and moving consume stamina, and I think the best way to deal with an attack is to not be there when it happens (there is a block button but I find myself rarely using it). The point here is to find a weapon you like and stick with it, you’ll build up proficiency as you use it which grants a small boost to your effectiveness.

Armor. Completing an armor set grants a set bonus, your starting set, for example makes you slightly more agile (or at least it feels that way). But, of course, you can mix and match later on depending on what works for you. 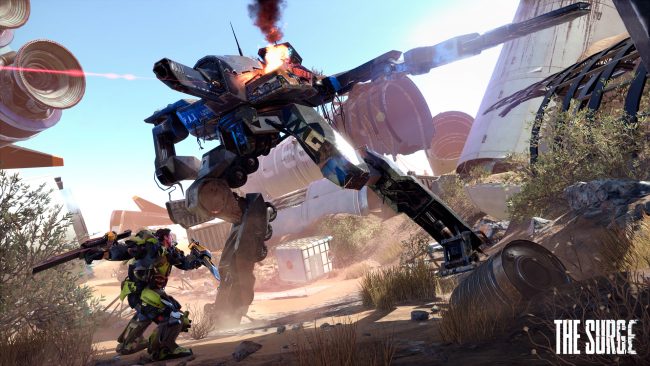 Like I mentioned earlier, I walked into The Surge completely blind. While I’ve played for a number of hours already, it looks as if I have little to show for it (when you look at the map). However, each discovery made along the way is highly satisfying, and your confidence will build with each upgrade you make. My advice: forego the guides and figure things out for yourself. It can be challenging and frustrating at times, but in a good way. The combat is solid and the game will keep you on your toes as you hack and slash your way around every corner. Happy Gaming!

The Surge is available now on PC, PS4, and Xbox One. The Surge was reviewed using a digital retail code (Xbox One) provided by the publisher.

Why do these contests at all and give away our personal prizes? Nerd Appropriate is a passion project for us. We love working on the site and want to share it with as many people as possible. We think what we do is sort of unique in that we deal with literally everything in that could be considered nerdy from movies and video games, to technology and pop culture. We love it all and want to share it.