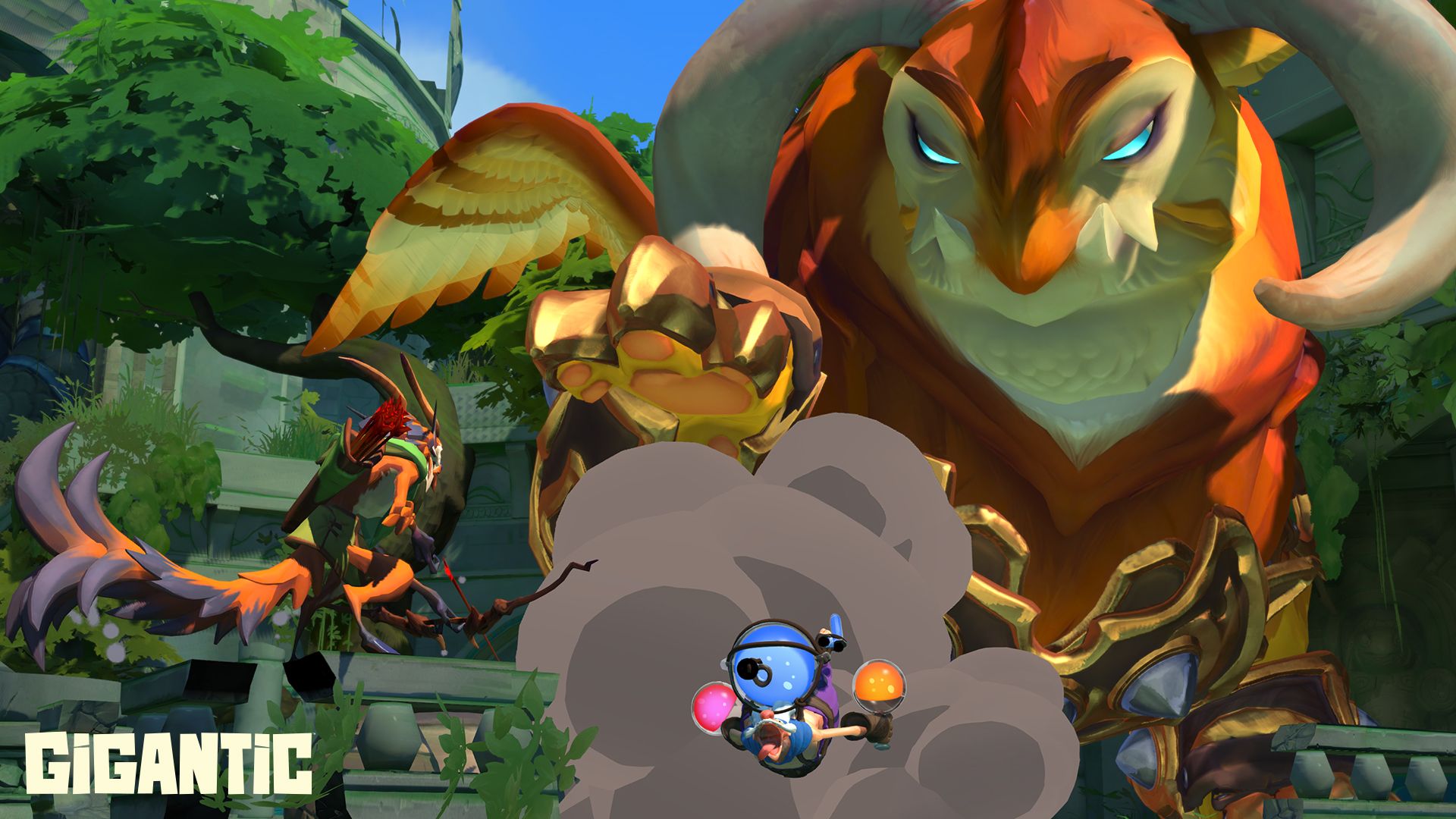 Full disclosure, when I first booked my appointment to check out Motiga’s Gigantic most of the folks I talked to wondered why I wanted to check out “yet another” MOBA title. Due to the insane success of free-to-play MOBA titles such as League of Legends and Dawn of the Ancients 2, designing the next great MOBA has become a quest of sorts for developers everywhere, and for good reason. Success means a whole lot of cash and quite a bit of glory. After about five minutes with Gigantic, I was blown away with how unique a specimen it really was and may have actually had more Team Fortress in its DNA than League of Legends. Gigantic is a tactical, class-based action game at its core, and it turns out its core might be made of gold.

The general premise of Gigantic isn’t unlike other multiplayer online battle arenas where you attack the enemy team, defend strategic objectives, and level up your hero. New to the mix is each team’s guardian, who you must defend/kill respectively during each match. The guardian sports pretty solid A.I. and does a lot more than lay around waiting to get attacked, so it really is like having an extra member on your team. While the game contains elements of other MOBAs, such as single match leveling and skill point allocation, the game moves and feels more like a fast paced action title with the camera planted nice and close to your avatar in third person. I can’t really stress enough how great this game looks; see for yourself in the quick video below.

After a few minutes of clicking through the odd assortment of characters I was drawn toward HK-206, a slightly clunky robot with massive cannons for arms and treads for feet. It didn’t take long for me to learn the basics; left-click fired a steady barrage of machine gun fire, right-click charged up a rail gun, “Q” fired a massive cannon shell at an arc, and finally “E” locked down HK-206 into a siege mode of sorts, making him immobile, but incredibly deadly. Within a few minutes I was getting kills and having a blast. The aiming controls were incredibly tight and I’m proud to say that I was able to pull off rail gun strikes from hundreds of yards away. Even though HK-206 was made of metal he was still incredibly mobile. Sprinting and jumping actually felt a bit more like an action platformer than anything else. Gaining levels came quickly and I was able to dump my points into things like health regeneration and ability recharge time.  After about twenty minutes of going back and forth, we ended up amassing enough energy (from kills etc.) to power up our guardian, which queued our entry into “The Clash.” During “The Clash” all ten players and their guardians entered a smaller, arena-like area of the map to finish up the match in one grand battle royale. With a bit of luck (and a whole lot of cannon fire) the enemy guardian finally fell. It was spectacular.

Gigantic, which is currently in Alpha, has been in development since 2012 by a relatively small team of about fifty people, but you wouldn’t guess that by how well it plays. With StarCraft and Guild Wars lead designer, James Phinney, at the helm, the game’s pedigree is apparent. I’m happy to say that Gigantic was perhaps my biggest surprise at this year’s PAX: Prime because it successfully blended a number of genres into an incredibly fun multiplayer experience. If you want to get your hands on Gigantic there will likely be a Beta period prior to launch sometime in 2015.

With the hustle and bustle of PAX Prime 2015 behind us, we return to our…

Want to see how Jill and Shuma Gorath play before they are offically released on 3/15?