Watch Dogs is a HUGE game with literally hundreds of things for you to do in a strange virtual Chicago. After exploring for a bit I stumbled across the scene of a nasty murder straight out of HBO’s True Detective. The execution of the side quest was really well done with ultra-creepy music and deluge of rain to seal the deal. While a lot of the side quests in Watch Dogs simply involve collecting bobbles or delivering cars, this particular quest chain was incredibly intriguing and fun to unravel.

After finding a number of bodies carved up and placed in bags in various creepy locations like railroad cars and subway tunnels, a clue led me to a tiny island on the edge of the map with only a few buildings and a light house. After using Aiden’s phone to hack my way into the cameras inside one of the buildings I discovered yet another corpse and a frightening recording that literally made the hair on my arms stand up. Midway through my investigation of the crime scene something interesting happened… I was getting hacked by another player. 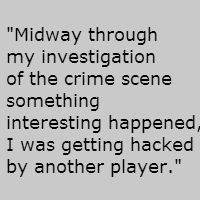 Watch Dogs has a neat feature that allows other players to infiltrate your game at random moments to steal your data and essentially cause chaos, and chaos it did cause. As soon as I got the notification that another hacker was in my game I went on the defensive and started scanning the area by jumping between security cameras to try and find out where this hacker was, after all there was nobody else on the island but myself and a body wrapped in plastic. Finally, after scanning around for a bit, I  saw a speedboat pull up to the dock with the culprit on board. Before I could react, the other hacker pulled out his rifle and unloaded a full magazine into my boat blowing it to pieces. For the time being, I was stuck. The other hacker then pulled away from shore just out of range of my rifles and continued to hack my data. Frantically, I hopped into the water in an attempt to swim out of range of his scanners but it was too late. Flailing in the water I watched as the other hacker successfully hacked 100% of my data and faded into the distance in his speedboat probably laughing at his accomplishment. A few moments later I got a message on Xbox from the hacker that simply read “nice try.” Ouch.

There is a ton of innovation to be found in Watch Dogs, sadly the game is SO vast that I’m guessing that a lot of players will never actually see everything the game has to offer. Somewhere buried deep inside Watch Dogs is a great game with some unique multiplayer integration, and so far the best moments the game have been the ones randomly created by other players and the mechanics of the game itself. One day in the very near future we may finally see a game that successfully blends an expertly crafted narrative with a well built mutiplayer experience… Watch Dogs sure comes close.

Exclusive hands on: Bethesda’s Brink – at last a unique FPS?

Japan is so different…2010 sales figures

Not only is Japan very far away from the United States, their tastes are also quite different. In Japan, portable systems sell like hotcakes (which apparently sell very very quickly).