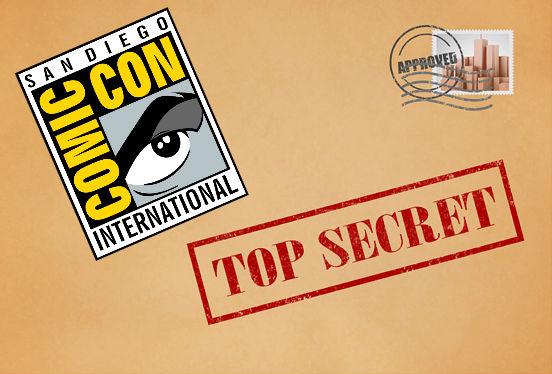 This will be my 11th San Diego Comic-Con, and while I don’t claim to be great at too many things, I’ve become pretty great at Comic-Con. This year I’ll be including even more tips for Comic-Con survival and mastery. San Diego Comic-Con can be an incredibly fun and slightly overwhelming experience, and everyone deserves to have the best time humanly possible.

1. Be friendly and put yourself out there: Cons aren’t all about the cool new exclusive toys, panels, and free loot, they’re also about meeting interesting folks and making friends. Weird right? Believe it or not, our podcast’s very own Hilary was a contact that I met at Comic-Con long ago (and will be at the Dark Horse booth this year).  Get yourself some business cards from Vistaprint or MOO, and make some contacts! You never know who will end up as a cast member on YOUR podcast.

2.  Time Travel is not possible… yet! Don’t try to do everything on your list, it’s impossible. Always keep in mind that having a successful Comic-Con means having FUN at Comic-Con. If you end up getting a stress-induced nose bleed due to lines, signatures, panels, and/or toys, you’re doing Comic-Con wrong. Pace yourself, look at maps, ask directions, and don’t worry about all the stuff you missed… It’ll all be online anyway!

3. Forget Hall-H: In today’s age of instant information and streaming content, it’s sort of silly to wait in line all night for info that will be available on the internet moments after a panel concludes. Hall H is a colossal meat warehouse that holds well over 6000 rabid fans, most of whom watch the panels on jumbo movie screens in the front of the theatre. Hall H is so massive that it doesn’t allow for the intimate/personal experiences that make Comic-Con special. In the olden days Hall H was a ton of fun, but Comic-Con’s policy of not purging the room between panels means that Hall H is rarely empty. There will always be someone camping out for something…

4. Beat them at their own game: Sometimes one must resort to cunning and subterfuge in order to achieve victory. As stated above, Comic-Con has an interesting policy of not kicking you out of your seat between panels. This means if you manage to get a seat in the front row of a hall with amazing panels, that seat is yours for the entire day until you decide to leave. Depending on the popularity of your panel, you may want to arrive up to three hours early. If you’re traveling solo without a bathroom buddy, you might have to hold it or make friends quickly.

5. Sweep the floor: The Comic-Con floor is massive and intimidating. It’s completely possible to spend all four days on the floor without seeing everything it has to offer. The floor also contains some of Comic-Con’s most exciting stuff, and you honestly never know who or what you’re going to encounter. Some of my best Comic-Con memories have happened randomly on the floor. Just keep circling like a shark looking for delicious chum.

6. The con never ends:  SDCC 2013 has panels and content that run until the late evening, but the fun literally never has to stop. Depending on your constitution, you could conceivably stay up for four days straight and never run out of anything to do. While combing the Gas-Lamp district looking for action is a lot of fun, it’s always better to know what’s going on before it actually happens. Rather than investing in a crystal ball, Outside Comic-Con has an ever expanding list of activities for you to do when you’re looking for some variety in your adventure. It’s sort of like a crystal ball I guess.

7. Avoid the “sizzle”: Have you ever heard of  “sizzle crotch?” If not let me tell you a quick tale of Comic-Con terror. About seven years ago a large group of us made our way from the east coast to San Diego Comic-Con. It was an unbearably hot year and our hotel was miles away from the convention center. After walking a few miles in the San Diego heat a few people in our party began to complain of severe thigh chaffing. After four days of chaffing the term “sizzle crotch” was born. How do you beat sizzle crotch? Be comfortable, wear clothes that actually fit you, and make sure you’re capable of walking a heck of a lot.  This awesome blogger walked almost 37 miles in just four days at the convention. Are you ready for that?

8. Ralph’s will save you: Before Comic-Con begins make sure you make your way to the nearby Ralph’s Supermarket. If you drop by Ralph’s on Wednesday afternoon prior to the convention you’ll likely see dozens of Comic-Con vets buying grub for the long weekend ahead. Prices at the convention center are a little out of control, and there is little worse than waiting in line for ages and paying nine bucks for an ancient corn dog. Rations!

9. The con outside of the con: In recent years people have been showing up for Comic-Con without having actual tickets for Comic-Con, and here’s why… There is a TON of incredible stuff to do! From zombie runs to drive in movie theaters, the gaslamp district is bursting with activity. For the past few years Zachary Levi’s Nerd HQ has even hosted panels down the street from the main convention with awesome guests like Joss Whedon, Seth Green, and Nathan Fillion. The best part about the Nerd HQ’s “conversations?” All ticket sales go to charity.

10. Support the little guys: There are literally hundreds of passion projects on display at Comic-Con, from hand forged chain mail to massive cities made of LEGOs. Make sure you take some time out of your panel schedule to check out some of the little guys that worked their asses off to showcase their talent at the show. You honestly never know when the little artist you discovered at Comic-Con becomes the next-big-thing.

PAX Prime 2012: Do the Hustle! Harmonix parties at Prime with Rock Band Blitz and Dance Central 3.