The short of it is this: Assassin’s Creed Revelations, while a great game by any other standard, was sort of a mess when compared to other games in the franchise. Notably, the inclusion of the horse-drawn carriage sequences and tower defense mini game, in addition to enough storylines to choke a camel, left me wishing for a simpler time in the AC universe. It’s almost as if this multicultural team of various faiths and beliefs took a throw everything against the wall to see what sticks approach to Revelations. And, honestly, the Ezio character never really did it for me personally, other than give gamers an excellent tongue and cheek reference to our favorite Italian plumber. And with that, since the Internet is always a sucker for lists, I present five suggestions (in no particular order) for fixing the franchise in Assassin’s Creed 3:

1. Create a long-term vision for the story 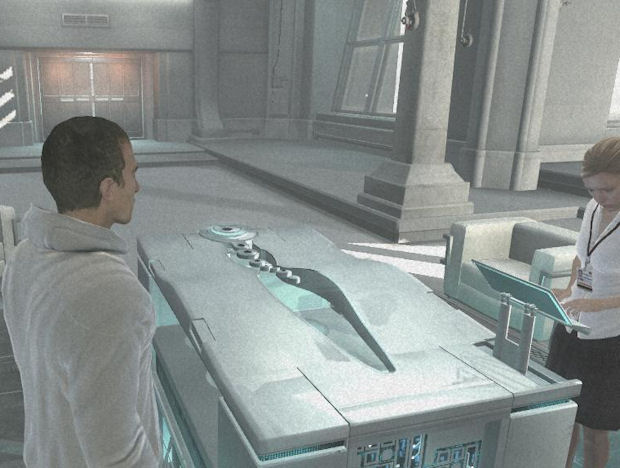 Wait, what am I supposed to care about?

I honestly don’t feel as if this franchise’s narrative has an end in sight. What is this, LOST? Remember what happened in seasons 2 and 3 when the writers had no idea how many seasons that show would go? That’s how you wind up with characters from the tail section of the plane (Tailies, for those in the know), characters that are hated so much they get buried alive, and a series finale that could never hope to put a bow on all of the storylines. By the same logic the campaign story of ACR is pretty weak, and I can only imagine that this game simply needed a vehicle to flesh out the story of Altair through the various flashbacks. Meanwhile Desmond had two narratives, one on Animus Island (really?) and one, um… also inside the Animus. If I were to ask you what the over arching narrative of the AC series is, what would you say? Desmond’s story, Altair’s story, the First Civilization? You’d probably all be right, and therein lies the problem.

2. One more iteration of multiplayer

I hate on this quite a bit — of course, I’m referring to perfectly fine single player games that have multiplayer modes shoehorned into them (see also Dead Space 2, Uncharted, and [EDIT: Future me will be eating crow on this one, ME3MP was awesome]). These modes are typically made by studios separate from the primary, presumably as a money grab to sell DLC content, cash-in online passes, and diminish the value of used copies. All things considered, however, AC multiplayer is fairly unique (The Ship and Bloody Good Time notwithstanding) in it’s encouragement of the subtle kill. The problem with online play is that most people just don’t get subtly or objective based competitive multiplayer modes. ACR improved upon ACB by punishing players for breaking character by placing lock targets over them, and giving less points for kills. Still, the outstanding problem with this and many other multiplayer games is that the better you are, the more upgrades you get — it’s a little counter intuitive — struggling players will continue to struggle as higher level players continue to get abilities. This game does have some balancing built in with triggered abilities while your losing, but it’s not quite there yet. With just a bit more balancing for novice players, the multiplayer would be just right…. but I’d rather still use that disc space for better SP content. 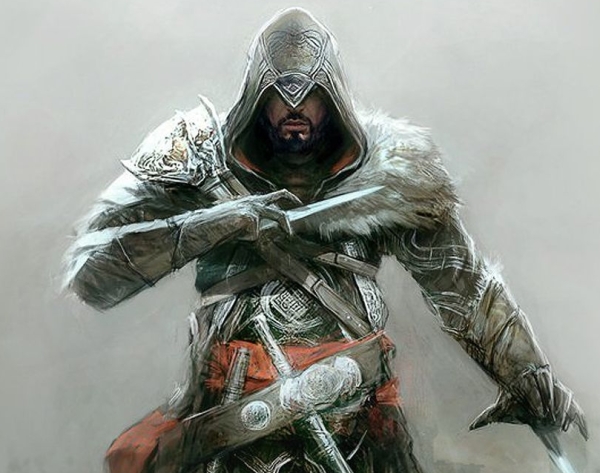 All you need is five, fast-switching weapons

It’s amazing that parachute doesn’t just fall straight to the ground while Ezio is carrying a sword, 15 knives, 15 medicine bottles, 10 poison vials, 12 bombs, 15 parachutes, a money pouch, a short sword, hidden blades, a gun, a crossbow, and all that armor. Come on, man. Unless the game is forcing me to use them, I typically only use about 4-5 weapons on a regular basis. I don’t think I fired the gun more than twice, and once was an accident while I was frantically switching weapons. Bond doesn’t even have as many gadgets, I’m not Batman… I’m an Assassin. More on this in a moment.

And man… nothing puts the breaks on combat faster than trying to switch weapons in the middle. Is this really the only thing an Assassin can’t do? My suggestion is for fluid combat, with some more of those excellent animations that encourage combat with multiple weapons in quick succession. While it is possible to throw a knife or fire a round in combat, it’s not fluid, and I kinda feel like it should be.

With all of the zany minigames, macro games, meta games, tower defense, Subject 16 puzzles, and what-have-you, I kinda like the Assassin Contracts side game. But what I don’t like is grinding out these quests on the couch. Look, people don’t want to play a constructive simulation while sitting in front of their televisions and sound systems. It’s largely a waste of time, but not a waste of time when you can do it on your smartphone.

It’s not like Assassin Contracts are selling copies of this game — but you could make a little extra on the side by selling smartphone apps. So, instead of mining the galaxy from my couch (I’m looking at you, BioWare) I can do it on the train, in the bathroom, or at a red light. And while we’re on the subject of the Assassin’s Guild, let me have more customization options for these characters, and a reason to care about them more too… right now they’re just a level and XP count to me.

5. Am I an shadowy assassin or a mass murdering mercenary? 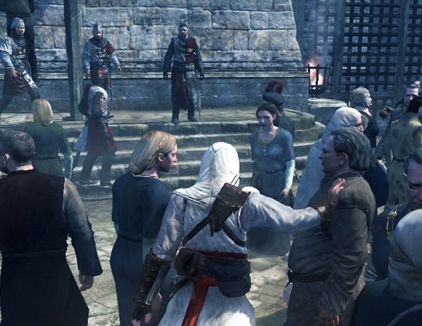 The perfect time to strike

There was a certain unique quality to the nature of the first Assassin’s Creed. If you remember, Altair would spend missions collecting intel around town about a potential target — what his tendencies are, where he hangs out, his guards, how to sneak into the building, and how to escape. You’d wait for just the right moment, see why the bad guy was so bad, before putting him out of his misery. There was an element of roleplaying, and it felt good.

Fast forward to now: the only reason you have to use stealth is synchronization. You really have no reason not to go on a killing spree in the middle of a busy marketplace surrounded by guards — you’re certainty armed to do it. Ezio shows up to a fight like he’s auditioning for The Expendables 3. Ubisoft already has a guy who forgoes stealth for combat… he’s a Prince, he kills underworld creatures, I’m sure you’re familiar. There’s a time and a place for all-out combat… and that time is not all the time. IMO there are more similarities than differences lately between Assassins Creed, Splinter Cell, and Prince of Persia, and that’s not necessarily a good thing.