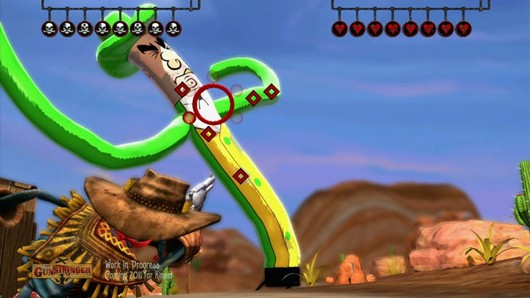 We’re right at the cusp of the holiday season, which coincidentally is also about the point where the first gen Kinect games get replaced with new (hopefully better) offerings. Kinect already has an arcade hit on it’s hands with Fruit Ninja, however this is already a known quantity, something we’ve seen before. I’m looking for something new, something interesting. So, I hit the marketplace in search of new content. Enter Gunstringer and Hole in the Wall.

Twisted Pixel’s Gunstringer is a game with some real character. It’s a adventure-shooter-western of sorts. You play as a cowboy. Stay with me. The cowboy is deceased, and is a skeleton (think dia de los muertos). Almost there. And you control him as a marionette. Seriously. There is sort of a meta-environment, as the game you are actually playing is one that is taking place on a stage, where the trees are made of paper towel tubes and cardboard. Occasionally you see shots of the crowd reacting to the action in the game (think gasps and laugh tracks). The crowd video is “live” and made up of — judging by the number of beards, glasses, cigar shirts and goatees — the dev team and their friends / families.

You control the main character by operating the virtual marionette apparatus with your left hand, then shooting bad dudes with your right hand. The shooting mechanic is a multiple-lock-on and fire system a la Child of Eden or Sin and Punishment… come to think of it, Sin and Punishment would make a pretty good Kinect game, albeit terribly difficult. To shoot you actually bend the right arm up into the air, like you’re shooting a cartoon revolver (pew pew pew). The right hand control is used mostly for dodging obstacles and leaning out of cover.

The game seems fairly linear in its presentation, the character moves through the environments on his own, leaving you the responsibility of moving him out of harms way. The demo has two levels, which includes a prologue and an another level in which you battle against the hybrid of an alligator and lumberjack… seriously. There was also a point in the demo in which the default controls were swapped for a punching mechanic, which is always fun. But forget all that… the battle at the end of the prologue is a giant inflatable arm flailing tube man. You heard me right. Call it a nod to Family Guy if you want, but it’s still pretty funny.

And that brings me to the humor of the game. While Gunstringer was developed by TwistedPixel, the creativity of the game and the type of humor is definitely one for fans of Double Fine games. The whole stage presentation actually reminded me of Stacking a bit, while the characters I encountered had sort of a Psychonauts vibe, although in what I’ve seen so far there wasn’t a whole lot of character dialogue — most of the story is told through visuals and narration.

But wait, there’s more. Buy a new copy of the game and you’ll have access to a DLC mission that gives you more of the inflatable tube man, as well as a full copy of Fruit Ninja Kinect… grumble… come on, guys, I just bought Fruit Ninja Kinect and now you bundle it with the game, for shame. The flip side to this is that the game will retail at $40 which is $10 less than what Kinect games normally retail for. I’m cautiously optimistic that the fun I had in the demo will persist through an entire campaign, but I think I’m gonna recommend this one…. especially if you are looking for Kinect games and don’t already own Fruit Ninja.

And that brings us to…

Hole in the Wall 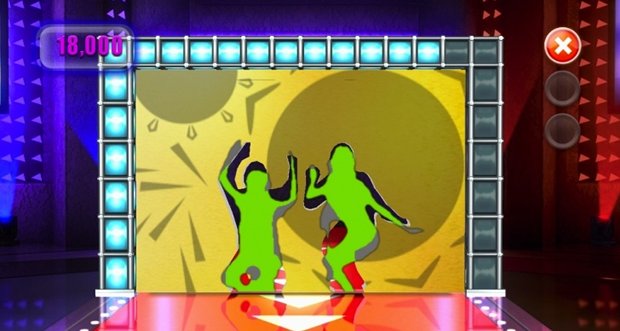 Ok. Hole in the wall is a Japanese game show brought to America, and now turned into a Kinect game. This $10 arcade title stays relatively faithful to the game show (sigh… yes, I’ve seen it). The game can be played solo, or in teams of up to two players each. The point of the game is to contort your body into a shape that will allow the character to pass through a… stay with me… hole in the wall. On the actual game show, the contestants are confined to a small “play area” while a wall hurdles at them with a silhouette carved out of it. Fail to make it through the — ahem — hole and you fall into a pool of water behind you. The contestants also wear some funny looking, form-fitting Bowie-esque leotards with kneepads and helmets.

The humor doesn’t exactly translate when it’s your avatar on the screen, much in the same way Wipeouts aren’t as funny when they are happening to your avatar. I think the value to this game is what is actually taking place outside of the screen (i.e. your living room). If anything, this is a party game — with a crowd of observers and two players trying to fit into spaces simultaneously, I’d bet this would be good for a few laughs. 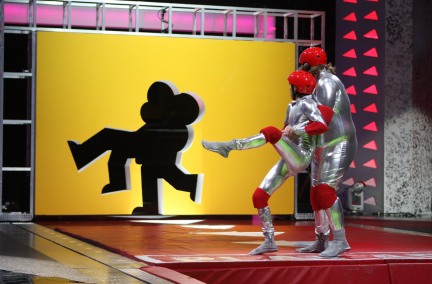 There are four rounds to each game, with the final bonus round making some of the holes obscured. On the actual TV show the contestants are blindfolded in the final round, while their teammate tries to coach them into position in the playspace — again, much funnier on TV. So, while some parts translate well, others don’t. It’s hard to recommend this one if you already have other party games like Wipeout, Dance Central, or Fruit Ninja — but it might be worth $10 to have a few laughs watching your friends contort into strange positions. Try the demo first before you decide, just don’t say I didn’t warn you first. 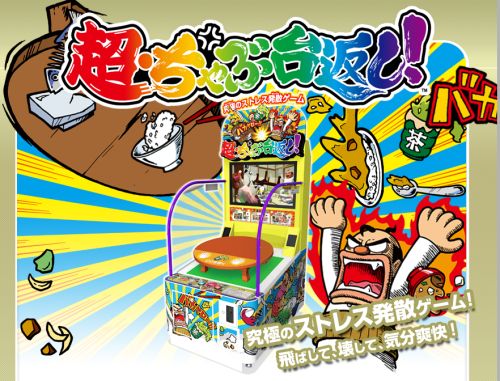 World of Warcraft: The Beginning of the End?

By now you’ve heard, WOW is going free to play (at least the first twenty levels..). Love it or hate it, World of Warcraft was (and still is) undoubtedly the most popular MMO in history. World of Warcraft was so popular at one point that it boasted an insane 12 million subscribers. That’s 12 million people paying a MONTHLY fee of $15.00. Blizzard and Activison were making so much money that they could probably feed a hungry 3rd world nation sloppy joes on a regular basis (yum).