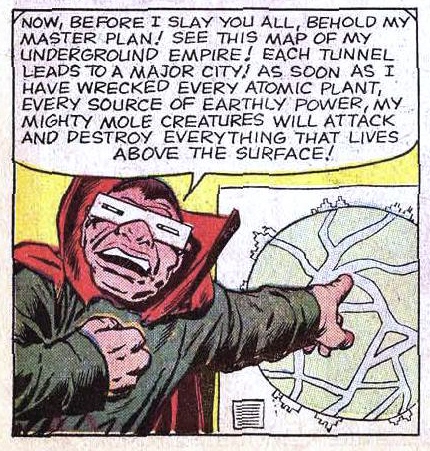 This just in gang!  Harvey Rupert Elder (AKA the Mole Man) , an American nuclear engineer and explorer has unleashed an earthquake on the eastern portion of the United States!  This photograph was taken of Harvey this afternoon shortly after the “mystery” quake took place.  While the earthquake came as a complete surprise to Virginia residents, Elder’s claims of “mighty mole creature” attacks appear to be balderdash.  Best wishes to all those impacted by The Mole Man’s savage assault.

Source Wikipedia (so it has to be true) The Mole Man was originally Harvey Rupert Elder, an American nuclear engineer and explorer. Elder was socially shunned due to a combination of his abrasive personality and his homely, dwarfish appearance. Furthermore, his fellow explorers ridiculed him for his eccentric, crackpot theories regarding a Hollow Earth. In 1956, while following the group of explorers called the Monster Hunters, he stumbled upon Monster Island, which was at the time a base of the Deviant Warlord Kro (at the time, Monster Island was located near Japan, although other stories place it in the Bermuda Triangle; some issues of X-Men have portrayed them as two distinct separate locations).

When Elder fell into a massive cave leading deep into the underground realm of Subterranea, he decided his theories had finally been vindicated. However, he suffered permanent damage to his eyes when he gazed directly upon a highly reflective deposit of diamonds. Partially blind and apparently secluded from the surface world forever, Elder dubbed himself the Mole Man and began exploring his new home. He eventually became the ruler of the branch of Subterraneans now known as the Moloids, and the ruler of much of Subterranea and the caverns of Monster Isle. He used the Deviant-derived creatures and technology that he found in Subterranea to strike back at the outer world in numerous attempts to rule or humble the world that had rejected him.

The Mole Man conducted attacks on the surface world by destroying power plants until he was opposed by the Fantastic Four in their first adventure on Monster Isle. The Mole Man apparently destroyed Monster Isle in an atomic blast, although it was seen on several other occasions.[1] The Mole Man’s Deviant-bred monstrous mutates, collectively known as the “Mole Man’s Monsters”, include the three-headed Tricephalous, the horned Megataur, and the flying bird-insect creature known only as “Skreeal“. The Mole Man also has a group of superhuman allies called the Outcasts.

The Mole Man later stole buildings from New York City, but was thwarted by the Fantastic Four and apparently killed.[2] With the Red Ghost, he next battled the Avengers and tried to use a machine that caused earthquakes to take over the world, however Giant-Man shrunk down to ant-size and sabotaged the machine.[3] Mole Man was among the criminals later assembled by Doctor Doom to attack Reed and Sue’s wedding.[4] Mole Man then fought a war against Tyrannus.[5] Mole Man used the original X-Men as pawns in his war against Tyrannus.[6] The Mole Man later trapped the Fantastic Four in a house that blinded them.[7] Mole Man continued to fight a war with Tyrannus.[8]

He later teamed with Kala, the queen of the Subterranean Netherworlders, and fell in love with Kala. He plotted to destroy the surface world, but was betrayed by Kala and Tyrannus.[9]Some time later, Mole Man and Kala were betrothed to be married. Namor, the Atlantean prince, helped out the Moloids when a conquering force was slaughtering many while using them for slave labor.

Much later, Mole Man befriended the Thing and then plotted to raise a new continent at the cost of sinking California, but was again thwarted by the Fantastic Four.[10] He was captured by Lava Men later.[11] Mole Man then attempted to bring peace to Subterranea, but was attacked by Fantastic Four clones.[12] He contended with Skrulls, and tried unsuccessfully to capture a Skrull technotroid egg.[13]

Mole Man later allied with Grotesk and Tyrannus against Deviants led by Brutus. He aided the Hulk in fighting Brutus’s Deviants. Together with his allies, he triumphed over Brutus, and welcomed back Kala as his consort.[14]

Mole Man became involved with the West Coast Avengers when one of his monsters attacked Los Angeles. His Moloids were caught in the middle of a Skrull revenge scheme on the Fantastic Four. A replacement Fantastic Four, consisting of Spider-Man, Ghost Rider, the Hulk and Wolverine were tricked into entering the Mole Man’s territory and battling his forces.

He later battled the West Coast Avengers along with the U-Foes during the Acts of Vengeance, but their attempts met with failure.

Growing Pains of The Living Dead?

Would You Actually Watch this Mass Effect Cartoon Series? (video)