The highly addictive produce-karate mashup, Fruit Ninja Kinect, is Xbox’s latest offering in the 2011 Summer of Arcade series. Although the game debuted on iOS, and has recently come to the Android market, the Xbox version adds the wrinkle of Kinect functionality — turning this quick finger swiping game into a full body hack and slash. But is it worth the fake 800 MS points, (or $10 real money)?

Having only played the iOS version a handful of times I have to admit that the Xbox version of this game pretty much looks the same. The overall styling of the game is colorful and vibrant, a true “arcade” game in the sense that anyone can jump up off the couch and play. And that aspect works relatively well. After some initial trouble with Kinect’s auto-sign in, my wife and I were able to take turns easily, with the game tracking the player change via Kinect sensor. What’s really great is that you don’t have to back out to the main menu to switch players, the change can be made at the “Score/Replay” screen which is a nice touch.

Your presence within the game is represented by a shadow of yourself, although it does little in helping you track your slashing on the screen. Play well, more, and the game rewards you with unlocks which include differently styled “blades”, backgrounds, and avatar representations. This is given in addition to the standard Xbox achievements. Oh, and there’s a two player mode too, tell that to your smartphone… just saying.

There are three major game modes: Classic, Arcade, and Zen. Each mode offers their own slightly different set of rules — Classic is three misses and you’re out, Arcade is over the top with power-up fruits and other special tricks, while Zen is your standard time attack mode. New to the console version of Fruit Ninja is the mega fruit — a gigantic item the flies across the board that initiates a rapid fire mini game when hit. Hitting the mega fruit freezes the screen and gives the player just a few moments to furiously make as many hits on the object as possible. I totally felt like an Ass doing it but it is a ton of fun. 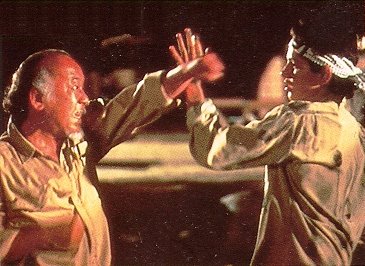 Now show me... paint the fence

Perhaps my only major complaints with the game is that the tracking is, at times, unforgiving. I felt like it was pretty difficult to reach the outer edges of the screen and have a slash register. This is harder than, say, reaching out to block a soccer ball or hit a volleyball in Kinect sports. Conversely, raising your hand up to slash down will sometimes generate unintended slashes, which is bad since not all items in Fruit Ninja are slash-friendly. At the same time, you don’t necessarily have to chop — the wax on, wax off move works well, and kicks register too.

Is it worth it?

It’s a tough call. If you’re an iOS user, your love affair with Fruit Ninja may have long since passed. However, this is the only Kinect based arcade game currently available (to my knowledge) and it happens to be a metric-shit-ton of fun. While there are some minor tracking issues, they are easily overcome with practice. Bring some buds over and the game only gets better with the score tracking and two player competitive modes.

I feel like ten bucks is near the breaking point for this game, but it is a standard XBLA price. Don’t fret — if you’re on the fence you can try the demo first, but I’d bet you’ll get sucked in quickly. Time to get back to slashing.

Its on. Steam is having another weekend sale, similar to last holiday season. A few…