The Story so Far

Armageddon takes place 50 years after the events of Guerrilla, you play as Darius Mason, grandson of the protagonist of the previous game. See the Masons are sort of like the Belmonts, the name is well known, and when trouble abounds, people know who to call. Long story short, life on Mars is going swimmingly until shit hits the fan… no really, there’s a Terraformer that makes the climate all habitable and such, and someone blows it up. The population of Mars is forced underground. Through some trickery, Mason later unknowingly unleashes a long-gone alien race, The Plague. Their ghastly appearance and stabby bone appendages send everyone into a tizzy. Who is going to clean up this mess? Well, you know the answer already, don’t you? 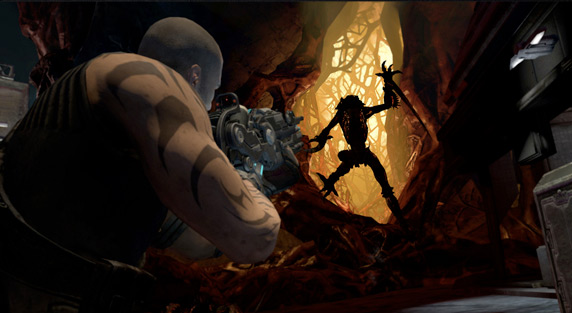 Unlike the open-world destruction fest of Guerillia, Armageddon takes the series back to its roots as a fairly linear FPS. The game very clearly borrows some elements from similar space thrillers like the Dead Space franchise — dimly lit environments, alien baddies, recorded messages left by the recently deceased, and a slew of interesting weapons to dispatch said enemies. This game makes no attempt, however, at survival horror.

Playing on “insane” difficultly, I constantly found myself armed to the teeth. It’s not a bad thing — the game seems to encourage you to try different weapons and they’re all pretty fun — the magnet gun allows you to pull one object into another, and while doing no direct damage you can get pretty creative with what you fling around the environment. Yes, environmental destruction is still a part of the game, but no where close to it’s prominence in Guerrilla. There are pistols, shotguns, and assault rifles, but that all seems so pedestrian when offered a plasma canon, or a disintegration beam, or even your trusty token Red Faction sledgehammer. And don’t even get me started with Mr. Toots… seriously.

Mason also has a handful of “force” powers, enabled (presumably) by his onboard computer wristband. The offensive and defensive capabilities, coupled with the traditional weapons make for some pretty incredible action, and there’s no shortage of enemies to obliterate. You’ve also got the nano-forge which can “rebuild” destroyed structures in the environment. You’ll usually find that massive firefights leave ramps and bridges obliterated, and the nano-forge is what restores those paths through the game.

There are also vehicle sequences, which include powerful mech suits and flying vehicles, which do a great job of breaking up the tension and provide the player with a little payback against the game. I felt like the game was trying to say, “hey bud, want to take out some frustration after that last sequence? how about you squash these bugs with a metal shoulder charge?” Thanks for that.

My only real complaint with the gameplay are the sequences in which the “rules” of the game are broken. See, Mason moves fast as hell — he’s can roll, sprint, and jump; your combat abilities are also upgradable as you collect salvage throughout the game. There are sequences, however, in which Mason is forced to remain stationary while some large vehicle trundles through an environment leaving mason uncovered like a sitting duck. You’ll make it though these after a couple of tries, but they’re otherwise boring and detract from all the fun stuff you can do in the game.

The level design is varied, taking you though a number of environments which keeps things fresh. And the game appears to have quite a bit of polish — you’d think that with all of the destructible environments you’re bound to get stuck behind something or caught in a rock formation, but I never experienced anything like that. Most of the game story is told through in game audio and pre-rendered cut sequences — and since this game has an “action movie” feel to it, they’re really not that bad or intrusive. The story is forgettable at times, and you won’t be building any strong bonds with the characters, but that’s not really what the game is all about. 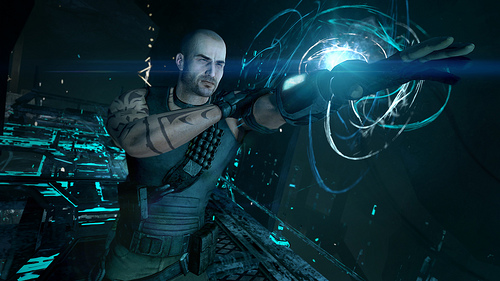 The game also features a four player infestation mode. It’s actually really fun, again, because the weapons are fun to use. The game also lets you collect salvage in this mode, which you can use to upgrade your character — these upgrades transfer between single- and multiplayer modes — this is becoming the new standard of FPS games — it is totally Awesome and welcome here. And while we’re making comparisons between this and Dead Space, Armageddon’s multiplayer blows Dead Space’s feeble offering out of the water.

The campaign will run you about 10 hours or so, and you’re encouraged to play though a second time with New Game+ (another new staple of these games) in which you take all of your acquired weapons and abilities into a new play through. New Game+ also allows you to begin purchasing Cheats as well as unlocking Mr. Toots…. seriously… Mr. Toots. While you may play the campaign a second time, the replay value of this game is most likely found in its multiplayer offerings. It’s really not a bad thing, as this game left me with a “not too short, not too long” impression.

In summary, this game is a very solid pick for an action game. It may not have the epic blockbuster feeling of a GoW or Dead Space, but the game takes what it’s got and does it extremely well. There’s something satisfying about destructible environments. While I miss the open world nature of Guerrilla, the direction in which the franchise story is going makes the current form of the game a sensible one.

I must admit I didn’t plan to play this game until the tried the demo… and in this world of “privileged” multiplayer beta access, I appreciate the single player sample, THQ. And now, here I am saying great things about your game, and looking forward to #5. Thanks for keeping it real.

A refreshing, well-designed approach to the puzzle adventure genre.