Yep… when you first heard about the Wii you were all like, “Uhhhrgh… I’m not gonna wave my hands around in front of the TV” or “I’m a hardcore gamer, the Wii is for kids…” Now, the Wii’s successor is officially slated for 2012.

And guess what, millions of people are waiving their Wii Remotes in front of the TV, your arms are stronger for it (Wii elbow is so 2006). And what is hardcore gaming anyhow? An FPS with blood and gore? Instead of calling yourself hardcore you should just stick with FPS gamer. Sure, there aren’t a lot of FPS games on the Wii, but there’s Mario, Zelda, Metroid and some highly addicting “sports” games. Don’t forget about the 20+ million copies of Wii Fit out there. 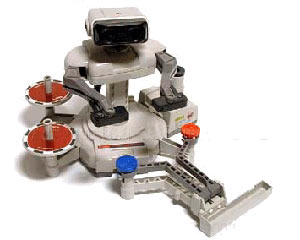 Love it or hate it, Nintendo is moving interactive entertainment forward through controller / interaction innovation. There would be no Kinect or Move without the Wii. So, what’s going to be in this new system? Only time will tell… but the time you need to be looking at is the past. Many of Nintendo’s innovations have manifested themselves in some form or another in previous console generations before becoming the standard of a new console. The Wii with it’s sensor bar and motion control drew inspiration from the power glove. The Wii Balance Board was preceded by the power pad. The original NES shipped with ROB who interacted with the system with weighted spinning tops. Nintendo also gave us the Virtual Boy, DK bongos, Mario Paint, and the 4 player controller adapter.

Speculation on the Internet now revolving around a controller with an embedded screen. We first saw this with the GameBoy Advance link cable, which would allow players to interact with games such as Crystal Chronicles, Zelda Four Swords, and Animal Crossing on both the TV and handheld console. Perhaps the Nintendo 3DS will ultimately become a game controller for the new Wii 2 system. But wait, there’s more. Remember that vitality sensor that Nintendo showed at E3 a few years ago? It’s a simple physio device that most likely measures heart rate and perhaps GSR, both of which could be used to measure arousal.

Don't be so quick to think you know what's in Nintendo's next console.

To me, the idea of a game being able to monitor my arousal levels is far more interesting than a screen embedded into the controller. Gamers get excited with the prospect of their actions impacting the outcomes of events in games (BioWare anyone?) — image the game adapting to your physiology. What immediately comes to mind is survival horror, imagine playing Resident Evil (one of the actually scary ones) while the game constantly keeps you at peak levels of arousal — in this case terror. Nintendo, being family friendly, might use the technology to determine when your frustrated and provide tips. Further, fitness games might use it for yoga and relaxation. The possibilities are endless.

So who knows what surprises the next Wii will bring, but my money is on some technology we’ve not quite seen before.

Nintendo Co., Ltd. has decided to launch in 2012 a system to succeed Wii, which the company has sold 86.01 million units on a consolidated shipment basis between its launch in 2006 and the end of March 2011.

We will show a playable model of the new system and announce more specifications at the E3 Expo, which will be held June 7-9, 2011, in Los Angeles. Sales of this new system have not been included in the financial forecasts announced today for the fiscal term ending March 2012.

I sacrifice everything, there’s galactic peace, but, what do I get out of it?
Nothing. But, then, then there’s control. Shepard essentially becomes, well, god-like.
Sure, the moral form dies, but, all that power? There’s something to gain from this….