I didn’t hate Zack Snyder’s Sucker Punch, but I didn’t love it either. Sucker Punch had a huge presence at last years Comic Con, and while I didn’t feel like sleeping outside to get into Hall H, there was a lot of “buzz” surrounding the film; after all it was Zack “300” Snyder, the same guy that gave us Dawn of the Dead, and Watchmen… That’s a pretty solid track record. What happens when you give a “visionary” director total creative freedom? You get Sucker Punched (see what I did there?).

The Look – Visually, the film is breathtaking. I payed a few extra dollars to see it on a digital projector and it was worth it. While the colors are manipulated and tweaked, it’s not quite as jarring as Sin City, or god forbid The Spirit. Very stylized and very slick, but we all knew Snyder could make a pretty looking film… right?

The Action – Snyder can do action. This film has everything a nerd could want, from steam powered Nazis to giant flame breathing dragons. He stayed away from his speed-up/slow-down trick that he did in 300, but I kinda liked that. This time he ops for a more handheld, frantic style of action cinematography, which for the most part works. The problem lies in the narrative, not the action set pieces. If you’ve ever wanted to see ninja school girls take on orcs, knights, nazis, samurai and more… then you may like this film. It reminded me of the Matrix if it were designed by a somewhat smelly Anime loving 14 year old. 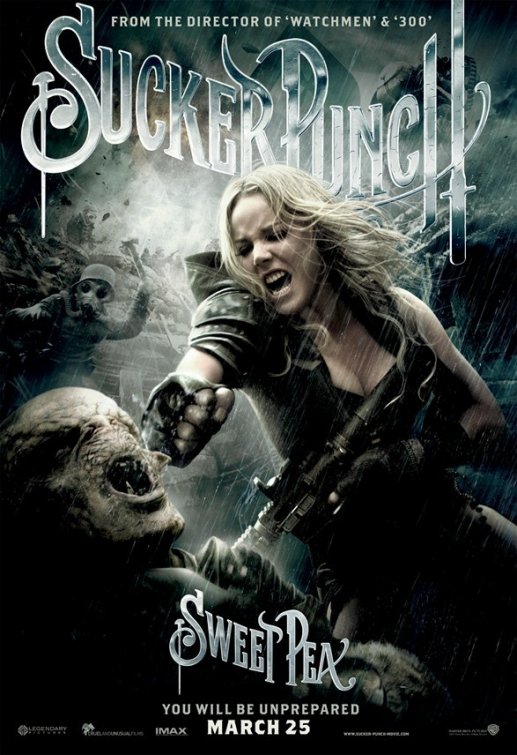 The Acting – The acting was sort of hit or miss. Emily Browning’s character Baby Doll is subjected to absolute hell and comes out a bit shattered. After these tragic events she creates two fantasy worlds to help her cope with the mental trauma. Do we really want to see her “shattered” for two hours?  Not really.  Bay Doll needed more of an arc before the final act of the movie.  It’s not really an “arc” if all the change comes at the very end. I do have to say Jena Malone and Abbie Cornish both gave great performances as sisters who join Baby Doll on her journey. I would advise you to keep an eye on Cornish, she’s got some chops.

The Story – This is what happens when you give someone total creative control. If someone handed me 100 million dollars I may make a film like sucker punch, who knows? Snyder was given the money and the power to make the film that he wanted to make. The problem is that overall story (that he wrote) is paper thin. A young girl suffers a traumatic event, gets stuck in a mental institution, creates false realities to help her cope, and hopefully escape. That’s really it. There are probably 20 pages of actual dialog in the entire film, the rest of the movie is an oddly paced mess. I was miserable the first 20 minutes, while the film was great to look at, nothing was happening, Baby Doll was just getting abused and walking around in slow motion. Things do get better as the story advances, but there is very little character development..

Multiple Realities – Baby Doll has to escape the institution before the doctor comes to give her a lobotomy. We all hate lobotomies right? In order to do this she enlists the help of handful of other girls with stripper names like “Blondie” and “Rocket“. Baby Doll creates not one reality to help her escape the institution, but two. We don’t see the mental institution for more than a few moments in the film, as the bulk of the movie takes place in a 1950s era burlesque club. The third reality is where the “missions” take place, and where the girls get to dance around in their anime-ninja costumes. Why three realities and not two? I have no idea. The girls do literally nothing in the “burlesque” reality… I actually don’t even recall them dancing. I do “get it”, really, but that still doesn’t make it a viable story telling technique.

The Music – The cast actually performs a handful of tracks on the soundtrack, including Carla Gugino. Sadly I found a few of the tracks very out of place. During one pivotal fight sequence Bjork pounds away in the background. Bjork I can see, but the song choice was a bit off putting. It honestly didn’t fit the sequence. You’ll notice when you watch it, promise.

The Film Itself –  I wanted to love this film. I tried to avoid all conversation and film reviews so that I could form my own opinions without influence.  And while I enjoyed it, and would watch it again, you cannot help but site some colossal flaws.  Sucker Punch tried very hard to be something it didn’t need to be, and ended up being a collection of 4 or 5 amazing action sequences wrapped around a very clunky story.  If Snyder wanted to make a film about a group of girls that battle dragons, robots, and Nazis, then he should have just done it.  Sadly, by turning these into “dream sequences” he made the action have much less weight than it should have.  The dark nature of the mental institution took a lot away from the “fun” that this film should have been.

The Ending – Spoiler alert… everyone dies… okay, well not everyone, but close. This film was PG-13, which is why the Nazis squirt steam and not Nazi blood. For a film that is supposed to be about freeing yourself from captivity, it ends on an incredible down note. Baby Doll gets lobotomized just like Jack Nicholson… that sucks. Yes, you can argue that the villains get their due, and it was never meant to be a “happy” film, but I would argue that there is another way to get an emotional reaction from your audience, like say… I dunno, character development and a story? 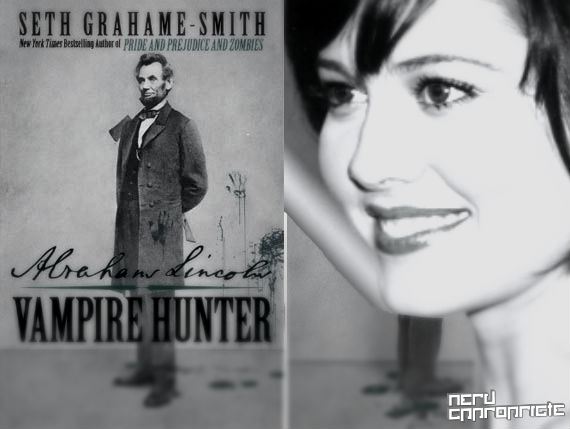 Mary Elizabeth Winstead, best known for her turns in Death Proof, Sky High, and Scott Pilgrim Vs. The World will step into the shoes of Mary Todd, Abe Lincolns vampire dusting wife in the upcoming , Abraham Lincoln: Vampire Slayer.

How did I not see this until today?  You're about to watch Mary Elizabeth Winstead…