A Lancer to my Heart: Often viewed as “the most anticipated game of 2011”, Gears of War 3 is set to burst from its emergence hole on September 20th of 2011.  I don’t drive a pickup truck, don’t chug beer out of a football helmet, and can spell my own name (on occasion) and guess what haters … I’m a huge Gears fan.. The Gears of War series gets a bad rap for being “another space marine game”, or “digital testosterone”, but I disagree. I’ve played the games, read the novels, and truly believe the Gears of War franchise is a rich and adult science fiction universe. But how does Gears 3 play you ask?

My Experience: Hats off to the folks at Microsoft and Epic for their fast moving line.  I was in and out in under an hour and the line was filled with a helpful and knowledgeable staff.  The line bosses and myself had a long discussion about Bernie, Sam, and the rest of the new supporting cast of Gears 3, and the guys from Microsoft were as excited as I was that Karen Traviss, author of the ultra-gritty Gears books, was now also the lead writer onGears 3. It’s interesting that people scoff at books that are based on games, a shame really.

The Game: Sitting down on small cubes, we were issued a 360 controller, and a head-set. Our group of 8 was split in half, Locust on one side, and COG on the other.  I ended up controlling the gravel voiced protagonist Marcus Phoenix. On my team was Cole (In his thrashball uniform), Dom (sporting his now famous “widow beard”), and the female gear Anya Stroud.  Who was I playing against?  Well my team was made up of both fans and press, but everyone there was a fan and knew their way around a lancer.

Big Guns: You begin by selecting your weapon set. Your primary weapon can now be the Standard Lancer (Medium range, rapid fire, chainsaw attachment), the Retro-Lancer (Short Range, attached bayonet ), or the Hammerburst (long range -w- iron sites). You can also select your shotgun, Gnasher or double barrel.  As soon as my team picked their load-out, we were ready to go…  The game-play was both fast and brutal, close range combat still seemed a bit awkward, like when two people are both saying “excuse me” and trying to get out of each-others way only to bump into each-other over and over….yeah like that.  I had one goal, and one goal only,  to use that new bayonet.  I wanted to “roadie run” myself into those Locust and impale more grubs than “Vlad”.

Stabbing: Throwing a smoke grenade into a crowded group of enemies I lowered my bayonet and sprinted blindly into the thick mist. Seconds later I collided with a locust who was facing the opposite direction.  Not breaking stride I stabbed him through the mid-section and tossed him over my shoulder like a piece of trash. The Retro lancer was glorious… I had to do it again.. okay.. one more time... again… soon I realized that all six of my kills were due to Retro-Lancer evisceration.  I didn’t kill a single enemy by gunfire.  Sadly the match was soon over and I was left wanting more… The good news is, Gears 3 beta begins next month and Gears 3 is fully polished and ready to go. It’s a beautiful game, and the graphical updates are very noticeable.  This is not a re-skin of Gears 2.

Verdict: An amazing multi player experience that will be incredibly addicting and rewarding.  Thanks PAX East for giving me the chance to play!

Skyrim’s Voice Cast is More Talented Than You Are

Skyrim is right around the corner waiting to devour your free time like a hungry Khajiit!  Good news Skyrim fans!  We received a press release from the fine folks at Bethesda highlighting the stellar voice cast of their upcoming massive open world RPG extravaganza.

Images from the E3 floor before the gates were opened: Gears 3 and Heroes of Ruin

Our spy on the inside managed to send us these shots of the E3 floor before the flood gates were opened. Sadly, shortly after these photos were taken he was dragged off by E3 security and executed in a dark ally. Honor his memory by taking a look at these photos. 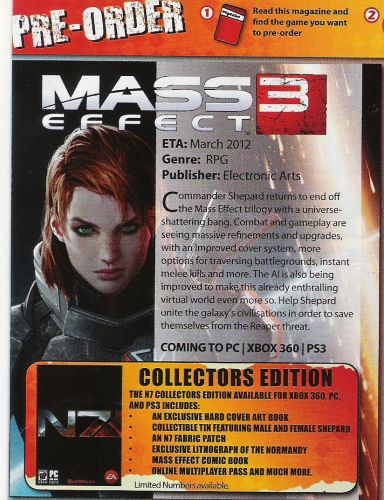 We don’t know if this ad is legitimate, but what we can do is look into the legitimacy of South Africa’s BT Games… because let’s face it, here in the West we know very little of this mysterious “Africa” being mentioned.