Where we’re going we don’t need… roads. With the recent release of the trilogy on Blu-Ray, I thought it would be a great time to take a look at a recently released card game based on the BTTF series from LooneyLabs. Its similiar, in ways, to Munchkin, and ultimately much easier to play than the setup / game instructions would lead you to believe. The game is designed for 2-6 players. You take on the role of a descendant of one of the movies’ characters. For instance a player might be Verne Brown, child of Doc Brown and Clara. Your goal is to alter the space time continuum so that events play out in such a way that allows you to exist (remember the kids vanishing from the photo in BTTF 1? kinda like that).

Woah this is heavy.

The main place space is laid out in a grid of four rows of six cards. Each card corresponds to a significant event in the BTTF timeline. For example, “Emmett Brown is murdered by Libyan terrorists.” Events are further categorized as “Lynchpins” or “Ripplepoints”. This is significant to the game because players can only directly affect Lynch-pins, which, in turn, changes Ripplepoints. So if Emmett brown is murdered (lynchpin), he never shows up in the wild west (ripplepoint). When a timeline event is altered, that card is flipped over on the table to reveal the alternate timeline event. Each player persona, then, has three things that need to be set on the timeline in order to meet the winning conditions. The character card is kept secret, however, so that other players are unaware of what you need to do in order to win. Great Scott!!

The Munchkin-y part of the game comes in through the remaining cards, which comprise the players’ hands. Each player is dealt three of these cards at the beginning of the game, and draw at least one more per turn. These are the cards that allow you to play equipment, change the timeline, and generally screw with other players in the game. The game is a little dicey in that one can never be too sure about what each other player needs to do in order to win. The timeline is also just confusing enough that even we got confused while playing, about our own winning conditions. And, in the spirit of all great card games, no player is ever out of the game, there are enough cards to drastically turn the tables, even as another player is about to claim victory. 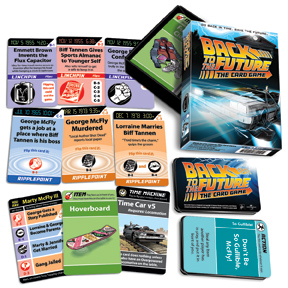 Let me show you my plan for sending you home. Please excuse the crudity of this model, I didn’t have time to build it to scale or to paint it.

How do you win, exactly? Well, first you have to set your three timeline events to the correct state. Then, naturally, you have to un-invent time travel so that no one else can further alter the timeline. If you remember from the movies, Doc Brown invented the flux capacitor after banging his head in the bathroom while trying to hang a clock. Soooo, if you prevent him from falling off the toilet, he hangs the clock successfully, thus never inventing time travel. There are actually six of these event cards, and only one of them actually ends the game. Therefore, even if a player thinks they are prepared to claim victory, and no other player interferes, there’s actually a 1 in 6 chance of winning. So if you don’t win, your conditions are somewhat revealed to other players, which immediately makes you a target for tom-foolery.

Overall, our testing group walked away with a positive feeling of the game. And, we were all in agreement that we would like to play again. Not like Monopoly, where you feel like you’re ready to throw chairs and flip tables over 5 hours later. Definitely recommended for fans on Munchkin, and definitely accessible to those who are not hardcore gamers. The price is right too, for less than the price of a movie for two, a group of friends will have a lot of fun with this one. Learn more at the Looney Labs Website.  Now, why don’t you make like a tree… and get outta here!

back to the futurecard gamegame night
Please Share This

After having a wonderful time, making new friends, and exploring Seattle last October, I decided to once again make the trek back this year for the second Geek Girl Con. I wasn’t the only one returning to GGC, the delightful ladies of Bioware joined me as well. This year there were two panels, the first of which was a presentation on the life cycle of a level. Moderated by Jessica Merizan, panelists included, Mary Kirby (writer), Raylene Deck (level designer), Sarah Hayward (cinematic designer), Karin Weekes (senior editor), and Melanie Fleming (localization producer). 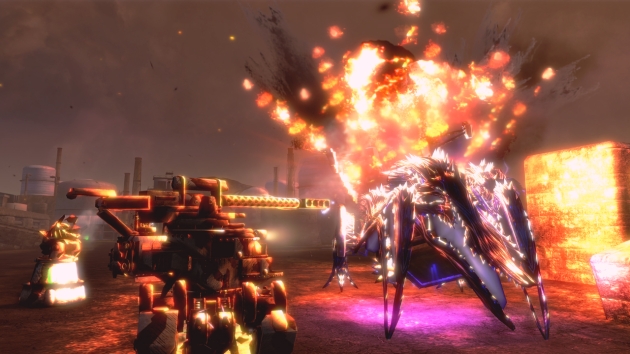