M.O.D.O.K the (Mental Organism Designed Only for Killing) is a Marvel Comics super-villain that was created by Jack Kirby and Stan Lee way back in 1967. That makes M.O.D.O.K a whopping 43 years old! While M.O.D.O.K never became a super popular Marvel Comics villain his popularity has been slowing increasing over the years.

Why do you care about this fat headed guy?

About 12 years ago I lucked out and walked into a comic shop that was in the process of going out of business. On their ceiling they had a colossal poster of the entire Marvel Universe. We’re talking 10 square feet of Marvel goodness! I purchased the poster for about 20 dollars and its been the centerpiece of my living room ever since. People love to point to obscure characters and ask who they are and what they do. Identifying characters on that damn poster has become a life skill. One character people often ask about is M.O.D.O.K due to his bizzare and oddly childlike appearance.

M.O.D.O.K was actually a scientist working for AIM by the name of George Tarleton. Yep, M.O.D.O.K is really a guy named George. After some bad mojo went down in the lab he was transformed into M.O.D.O.K and has been battling people like Captain America and Iron Man ever since. He doesn’t win very often.

So… does he just headbutt people? I mean… look at that melon!
Well George has superhuman intelligence and a brain more powerful than any computer on Earth. It’s so powerful that his head had to grow to an enormous size in order to hold in all that knowledge. Because his head is so damn big, he had to build a special flying chair to help him stay mobile. Not unlike a hover-round. Oh yeah, by merely furrowing his brow he can control people’s thoughts and generate impenetrable force fields. Not bad for a fat floating head eh? 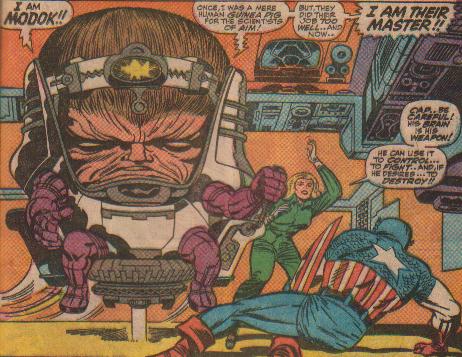 Why are you talking about M.O.D.O.K anyway?

I feel like the guy doesn’t get the respect he deserves. I mean 43 years is a long time to be a super-villain. At least we’ll get to see ol’ George in action this February when he enters the arena in Marvel Vs. Capcom 3. Check him out in action.

The Death and Return of Superman: Kryptonite for a Shitty Mood