Monster Jam: Steel Titans is the latest release in a series of monster truck games that simulate the experience of being a driver in the series. While this game likely isn’t going to win any awards, it offers solid casual fun for fans for monster trucks and racing games in general.

In reviewing this game, I decided to play it alongside my young son… because I was interested to see how two different audiences might react: kids who love monster trucks vs. grizzled old achievement hunters, such as myself. Turns out, we both found something to enjoy here, which I really think is a selling point for a game like Monster Jam Steel Titans. 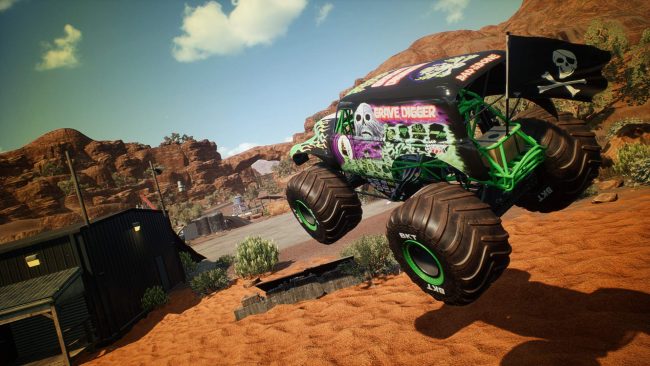 So, as the name might suggest, the game lets you drive monster trucks in various events in order to earn credits, which are then used to upgrade and unlock more Monster Trucks, which allow you to keep driving in various events in other locations. It doesn’t get much more complicated than that, nor does it need to be. The game starts out with a brief tutorial session in an open world environment called Monster Jam university. A narrator walks you through performing some of the core skills in the game including driving and doing tricks. It is a fairly decent onboarding experience to aspects of the gameplay that are a bit tricker to get a handle on.

Compared to other racing/driving games, in general, the trucks in Monster Jam Steel Titans are fairly challenging to handle. It feels as if the 4 wheels on the truck have a mind of their own, and are seemingly controlled independently. In reality, the front and rear wheels can be controlled separately, and the game’s default controls sort of link the steering together for you automatically. It definitely takes some getting used to. My recommendation is to at least try the control scheme that has you controlling the front and rear wheels separately, because I feel like it adds a little something to the simulation part of this game. With a little practice, it does feel satisfying to master the controls. That being said, my kid had a really difficult time driving the vehicles, but he did enjoy looking at the different vehicle designs and watching me drive them. 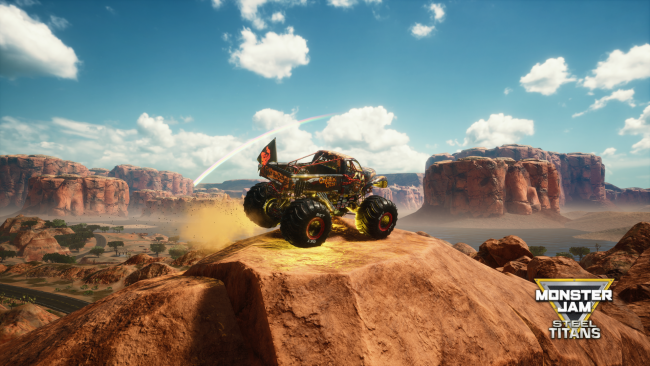 And you’ll need to do it anyhow. There are a number of events in the game including racing, trick competitions, and open-world objectives. The races can become frustrating at times, especially in head-to-head, where the AI races a perfect line each and every time, requiring the player to hit bumps, turns, and jumps with perfection in the latter stages of the game’s “Career” mode. The races are a bit more fun and forgiving, and I found that I enjoyed racing more in the open world than in the game’s various arenas. Let’s face it, stadiums are difficult to replicate in games, in terms of creating the electricity of an environment with thousands of people without actually animating thousands of individual people. The open-world has more of a subjective feeling of freedom and I preferred the events that took place there. 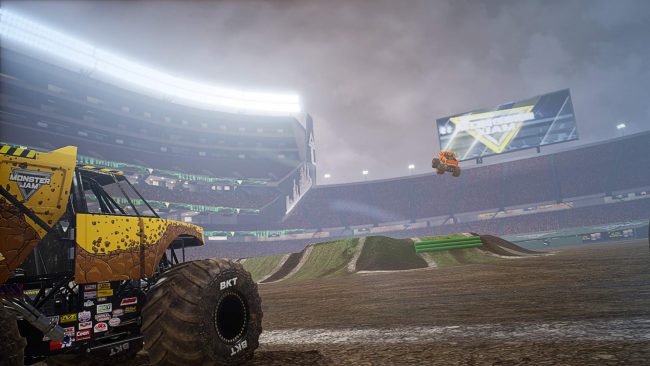 There are also trick-based events that require the player to do things like, drive on two wheels, complete flips in the truck, or destroy objects in the environment. This is where things get a little dicey because the physics in this game are a bit wacky. Bumping into the side of a wall sometimes sends your vehicle flying 20 feet up into the air, the trucks themselves can spin like tornadoes, and you can backflip by driving into just about anything vertically positioned. It’s a little comical at first, but becomes frustrating when actually trying to focus on completing the events. 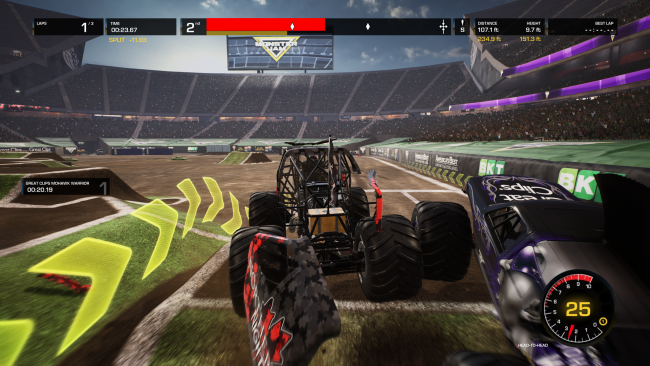 My expectations were not very high for Monster Jam Steel Titans, and I definitely feel as if players can have a bit of fun with this one if not taken too seriously. My only main gripe with the game is access to the trucks themselves… they’re literally the main selling point of the game, and there are dozens of them. But ALL of them, and I mean all of them need to be unlocked. You start out with a training vehicle, and eventually a single branded truck. Once I completed every single event in the Career, and got all of the collectibles in the open world, I still have 10+ vehicles to unlock and basically no new content to play. Each individual vehicle has about 20 unlock points spread across 5-6 attributes, which also cost money. I would have preferred that the game been a bit more generous with credits, or lower the prices of the vehicles themselves, or provide vehicles as awards for completing objectives… anything really.

Overall, I’d recommend the game to fans of monster trucks and possibly racing fans in general looking to fill gaps in between other games. Kids might have trouble getting a handle on the vehicles, but would likely have fun messing around in the freeplay open-world. Finally, achievement hunters should be aware that unlocking all of the vehicles is currently a grind, and the campaign might get a repetitive but it’s doable. Monster Jam: Steel Titans is available now.

The Conventions keep on coming!  PAX: Prime is just a few weeks away, and with…