My Memory of Us is a 2D adventure from the Polish indie studio, Juggler Games, and published by IMGN.Pro. The game spins a heartfelt tale of friendship based on/within the occupation of Poland during World War II. Interestingly, the storytelling aspect of the game frames it in such a way that some of the terrible events of that period in history are such that characters and events are replaced with metaphors that still deliver on their gravity… those are the tales that make you reflect and hopefully provide some perspective in the process. My Memory of Us does the storytelling part well, thanks in no small part to a very special guest (read on) lending their talents to the game. That, combined with some interesting puzzles and almost monochromatic, yet visually rich appearance make for a compelling experience. 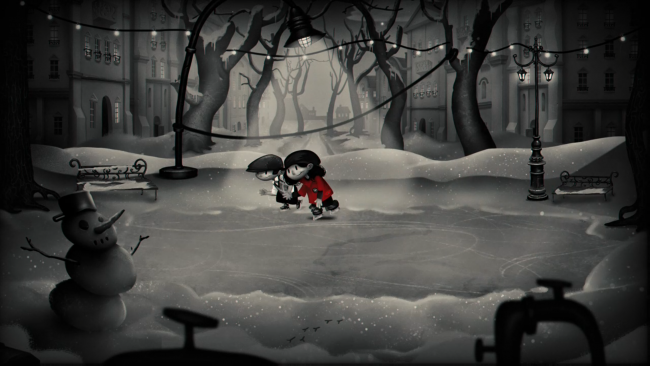 The War does not take center stage in My Memory of Us. No, this is a game about friendship and love. The player controls two characters, a young boy and a young girl, that become fast friends. They quickly find themselves placed in difficult and heartbreaking situations, yet find a way to persevere in all of the terrible things happening in the world around them.  Holding hands throughout the game, whenever possible, the boy and girl both have unique skills that allow the two to succeed through various challenges together. When the boy takes the lead, the duo can sneak around, steal items, and distract other characters. With the girl in the lead, the duo can run through environments, activate out of reach elements with her slingshot, and help the boy climb to higher places in the environment. Fans of 2D adventure puzzle type games (e.g., Limbo, Brothers, Never Alone) should find a lot to like here. 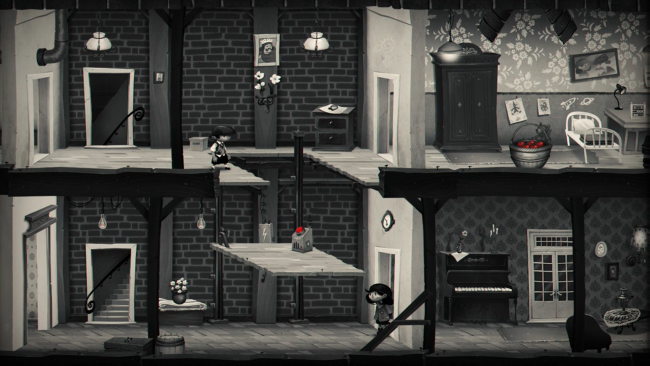 The duo aspect puts an interesting twist on the core gameplay elements in this genre. There are times when you need to use each character in different places, and in sequence, in order to solve environmental puzzles. There are more emotionally difficult times in which the duo becomes separated, as you might have already imagined, and it is left to one to work alone to find the other. There are also some situational puzzles as well, which I’ve really grown to like. Those are more like point and click adventure type puzzles where you zoom into an element in the game world and try to determine what the puzzle is and how to solve it. One, for instance, was a sliding block puzzle in which you try to get three blocks to each land on their respective goals on a 2 dimensional grid. I really appreciate how each level offers something a little different whether it be a team puzzle, a logic puzzle, or a stealthy traversal challenge. 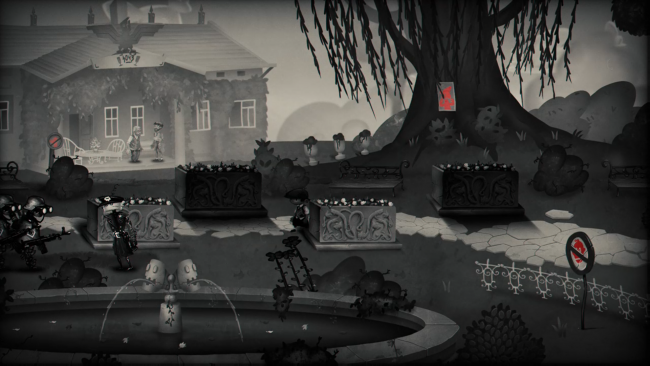 Mentioned earlier, the game is presented in a clever way. The boy, now an older gentleman, is telling his story of those past events (thus the name of the game) to a young person that comes to visit him. The entire game is presented like a memory, in black and white… almost. Instead of an exact retelling of events, however, an evil robot army invades their world. We learn that some citizens are painted red and have their freedoms restricted, while others are left alone. Knowing the meaning behind the story makes it no less powerful to see it told in this way, and that is amplified somewhat through the eyes of two kids who don’t fully understand why those things are happening. Still, the game finds ways to be lighthearted at times as these kids find comfort in allies throughout the game, and in one another. 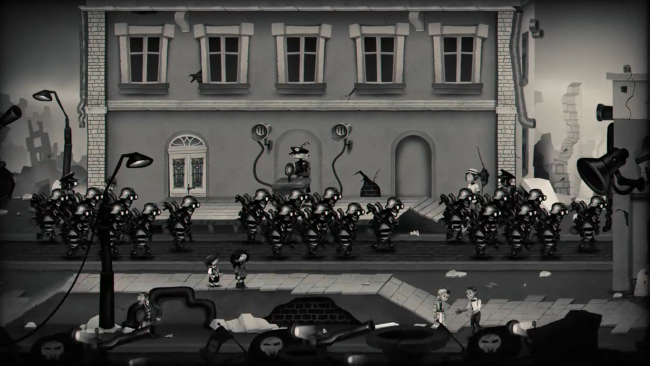 Before and after each level, you get these little narrative bits from the older gentleman in the present (the boy in the story) that help to set the stage and move the story forward. In what is definitely a win for this game, those narrative bits are voiced by none other than Patrick Stewart… yes, that one. Let’s get one thing right, I already like these types of games, so this wasn’t a hard sell for me, but I will always remember this game for that when I saw My Memory of Us at PAX West 2018. There was a Polish games booth set up on the 6th floor and me, being partially of Polish descent, had to stop and give a look even though I was running late for something else. I immediately picked this game out and ask the developer at the booth to give me the run down. He asked if I could play and I politely said I was in a hurry; to which he replied, “here” and handed me a pair of headphones as he started a cut-scene. And this is where you (and I) said “how did you get Patrick Stewart on the project?!” with the short explanation being, “We asked.”  90% of success is just showing up, right? 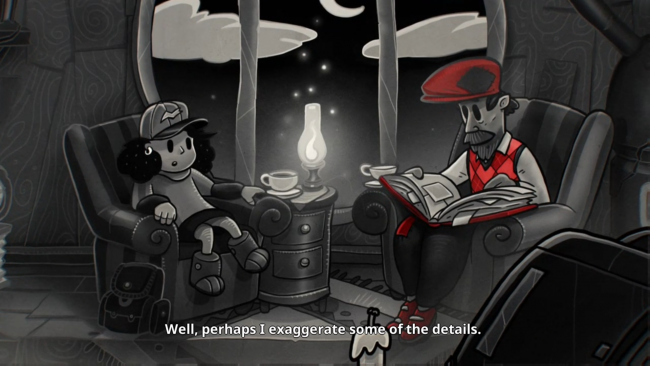 Achievement hunters should also take interest in My Memory of Us. You’ll need to track down the requirements ahead of time, because only a few are unmissable. Though, once you know what you are doing the achievements are well-balanced and fair. I once failed a stealth achievement halfway through and was able to restart at a checkpoint, continue on, and unlock it (as opposed to restarting an entire level). There’s only one collectible thread, and the items are in plain sight and mostly only require you to go one screen out of your way to find them. You can replay any level, and the collectibles are sequenced to them, so its all completely doable. That’s always a welcome and nice touch for a 2D adventure game.

My Memory of Us is recommended for fans of 2D puzzle and adventure games, folks who like a bit of realism woven into their stories, and pure achievement hunters as well. My Memory of Us is now available for Xbox One, PC, and PS4. Happy gaming.

Watch Dogs: The E3 Game of Show – Hack the Planet!

How did Watch Dogs steal the show? Easy, it was actually a well kept secret! In development at Ubisoft for over two years, Watch Dogs was a huge surprise for even the most seasoned video game vets.  What we do know is that Watch Dogs will be an open world adventure set in Chicago U.S.A. , go anywhere, do anything, and eat as much deep dish pizza as you’d like!  Like our good friends Zero Cool and Crash Override, the main protagonist Aiden Pierce can control almost anything that’s wired into the grid….