Social media isn’t my normal area of commentary, particularly Twitter functionality. Twitter’s recent removal, and quick reinstatement, of the block function got me thinking as it does touch on harassment, something I have commented on. This fact, coupled with some valid views questioning the point of the block function, left me with something to say and the need for more than 140 characters to do so.

Twitter is a public sphere; there is zero expectation of privacy on a public account. It is part of why I’m amused when I see people tweeting about the NSA invading their privacy: they’re sharing all sorts of potentially valuable information an entity, like the NSA, wouldn’t even need to covert collection efforts to view or retain. If you don’t want people to know what you’re doing? Don’t tweet it, post it to Facebook, etc. I get that.

Yet block does serve an important function for users. Not because it’s an effective way of protecting privacy, but it’s a way of saying to a harasser, “Stop. This conversation is over. Don’t talk to me.” If a user proceeds to continue to make contact, let’s say creating an additional account to continue their harassment activity, it demonstrates an escalation on the part of the aggressor. It would augment any kind of complaint, in my opinion, as one could say, “Hey, I asked them to back off by blocking them. They proceeded to find another ways to bother me.” It’s not going to stop a determined person from seeing a public feed and interacting, but it’s a way for users to send a message and fight back. Something I feel is important: to have some control over what you behaviors one will, and won’t, tolerate.

Going private on Twitter is a great option to limit unwanted interaction. However, the trade off of not being public is the inability to strike up random conversations non-followers as they won’t be able to respond; it limits the social part of social media. It’s an hard choice to make on an open communication platform, unless one prefers communicating only with a small circle of known friends and family. There are plenty of reasons to have a private account, but it shouldn’t be touted as the primary tool to mitigate unwanted interactions; it puts the burden on the victim and does not hold the offending parties accountable for their actions. For example, a buisness account, like let’s say the ones run by community managers for video game studios, isn’t going to want to go private; it needs to be able to interact with the target audience and grow it. But shouldn’t the individuals running said accounts be able to take some action to mitigate potentially abusive behavior againt them? I think so. They are people who deserve to be treated with respect and dignity after all. 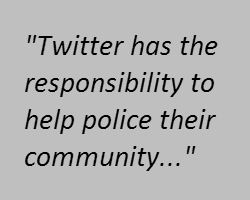 Ultimately, we are our own best defense. We are all responsible for protecting, and policing, the information we choose to share with the world on social media. However, the harassed shouldn’t be the ones having to shoulder the entire burden of protecting themselves from malicious users. Twitter has the responsibility to help police their community, to respond to complaints, to take appropriate actions to mitigate threats to users when necessary. Will any new policy be perfect and solve all the problems? Likely not. However, working together with users, listening to their needs—as Twitter did last night—can certainly help make facing the challenges of maintaining a positive, healthy, social media space for interaction.

A couple of years ago, my awesome friend Jorge lent me a book. (Excited yet? You should be.) It was titled, God’s Demon which piqued my curiosity not only because of the name, but also the way the pages rippled from repeated fondling. (You’re sick if you thought anything other than reading. This is a family site, people. No, not really. Skeet!)

Is the new DLC worth your soverigns? We go into the deep roads to find out!