I bought a Google TV a while ago and had the (blech) of using the first version of it for a few months without a cable box. The Google TV is one of those classic Google products. You know the type. Quick to market, short on delivery. It is at it’s core the essential difference between Apple and Google. Both are massive companies fighting for your eyeballs and dollars, but Google is and probably always will be a group of nerdy engineers. They are the inventors, the crazy ones that Steve Jobs so famously talked about in an ad. They will rush to your waiting hands with whatever crazy idea that would in any other well marketed company be a complete and total game changer (wave) or it may be a half baked, poorly launched dud (buzz). In either case Google will always run to market with the latest idea, the newest innovation of something they just came up with, and probably half the time it will fail horribly. Apple on the other hand are designers. They refine and reinvent. The reason an iPhone or an iPad is such an amazing product is because if it wasn’t, Apple wouldn’t put it out. Rarely and I mean very rarely will you see Apple rush into a market that otherwise didn’t exist. I would honestly say the last time I truly think they stepped into an unknown market was iTunes and that was eleven years ago. That’s right, if you remember the iPod and iTunes being launched, then you are probably somewhat old. It’s OK, I’ve come to terms with it and you should too.

What does this have to do with Google TV? I was excited when it was announced. It sounded amazing, a browser on my TV with all of the might of Google’s intelligence behind it sounded fantastic. Picture-in-picture searching or watching YouTube videos about sports teams that I’m watching live. Amazing score overlays built by brands like ESPN to coexist with my football game. An IMDB app that will tell me who directed the movie I’m watching. Tight integration with my DVR to help me watch TV better. Version One of Google TV delivered on this only partly. The search app is truly amazing. I call that an app because it was in the truest sense of the fake word. It didn’t force you to leave what you were doing it just slid in and helped you find whatever it might be wherever it may be in the world. Everything else fell flat. There was of course the very public shunning of Google TV by pretty much EVERY major brand. Hulu, CBS, ABC, one by one all of the major content providers reacted to the release by turning off access from the device to their content.

Wait, react? Why would they have to react to something, didn’t Google talk to them? It would have been nice and probably would have fostered an amazing device. But the old guard of cable and content providers moves slowly and Google does not. Instead of holding onto the product and allowing (another half baked product) the Apple TV to go unchecked, Google went forward and figured the providers would fall in line, I mean after all, they’re Google. This of course did not happen and the device went down as “one of the worst product launches” Logitech ever moved forward with.

The other major failure here was that Google fought convention. The “marketplace” of Android was nowhere to found. Rather opting for developers to build on a web app type of architecture that just recognizes when a user comes to the site from Google TV’s browser. This works from an engineers point of view. People like Ryan (bo-balien) and myself have long debated whether a phone app needs to be much more than a web app. But the reality of it is that people don’t use the web like they do apps. Websites provide information, apps are interactive. It is a harsh truth that I hate. The browser is amazingly capable now adays, but there is something about going to an app that just makes sense. It works. Apple (the designers) were of course right. (someone mark this day in history as me saying Apple was right).

Can it be fixed? Well Google hopes so with the 2.0 release of Google TV. This release sees some major UI improvements and access to the Android Marketplace. The list of Apps is small, and being that the amount of active Google TV devices out there aren’t numbering as high as a competitor like Roku, I doubt there will ever be that many. The good thing is that the few apps that are available are all professionally made and well thought out. Netflix works fantastically, the Youtube app is the best I’ve used, and even the Flixster app works well and looks fantastic on the TV. 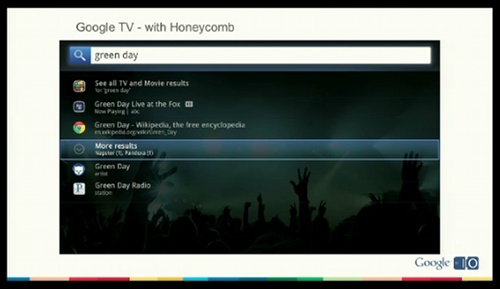 Where the device really shines is in integration. This is what makes it a hard sell for Google. This is not a Roku or even really an Apple TV, although with access to Google’s newly building movie, TV and music library, it is getting there. This is a box that worms its way into your table top setup and makes everything work just a little bit better. The integrated search is fantastic. I can look up Seinfeld and see if it is currently on, whether I can buy an episode, or where I can watch it on the web or in the apps I have installed. I can picture-in-picture what I’m watching and pull up the browser and look for things I need. It works well and never even causes a hiccup in the process of watching my shows. As ridiculously large as the Revue’s keyboard/control is, I often find it in my lap. It essentially replaces my cable box as much as it feasibly can. THIS is what Google needs to do. Cable hardware is notoriously horrible. I have the same set top box now that I’ve had since I had Brighthouse almost 5 years ago. I haven’t had a phone, a laptop or any other tech device last that long AND do its job well. This hunk of plastic crap is no exception. The menu is outdated and horrible, the system sluggish and unresponsive. As a bridge to make your experience with cable better, Google wins.

The problem with this is that people that have cable are no longer the people who are bleeding edge on tech. The market is changing and Google chose the safe bet of helping people augment their home systems instead of replace them. Roku thought that a cheap box to deliver the content you want is what you were looking for, Google thought that maybe you just wanted to make your life better. I think Google was right, but may have been better served by partnering with companies like Verizon and Time Warner to replace their hardware in exchange for all that juicy user data they love. 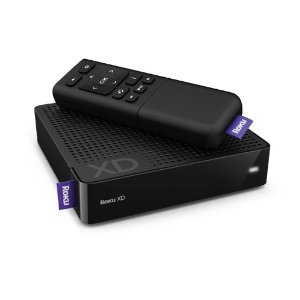 Should you buy a Google TV? Well, that’s a two sided question. If you are looking for a cable replacement box then no. Absolutely not. You will be let down in almost every way with the exception of good Netflix and Youtube apps.  Instead you should throw the $75-$100 bucks down on a Roku. You will not be disappointed with that wonderful little box. It does nearly everything you may need and probably a lot more you don’t. If, on the other hand, you have cable and are looking to make that experience better and you don’t need Hulu then I say it may be good. This is still not a fully realized experience, but it is getting better as time goes on. The Goog’s unfortunately left me hanging on this one, but I still have hope that someone will change the TV game once and for all.

Edit: I wanted to add this on, recently OnLive announced they will be bringing their streaming gaming to ALL Google TV devices. Right now you can download the viewer to get a taste of what the service has to offer, with the exception of being able to play any games. This may be something you are into, it may not.

A preview for Fox’s Terra Nova aired during the big game this past week. How soon until it will be cancelled?