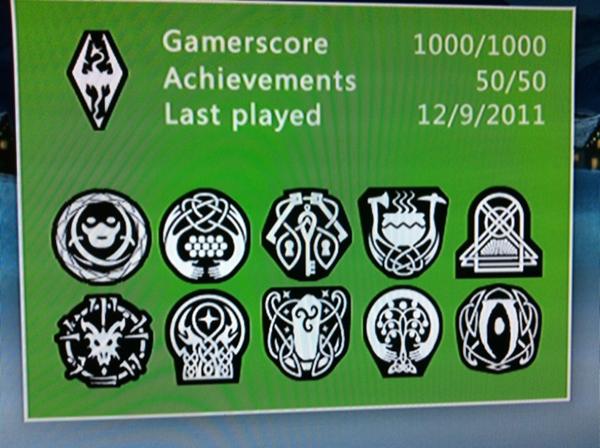 Last night something strange happened, I acquired each and every Skyrim achievement currently available for the X-Box 360.  Now, I’m not normally the achievement hunter type, but with a game as OPEN as Skyrim I found the achievements to be an excellent compass in the night… so to speak.  After hundreds of hours of gameplay, a few sleepless nights, and some bedsores, I figured I’d share some of the things I did right as well as some of the things I did terribly terribly wrong…  enjoy. Oh yeah, this article will contain some VERY minor spoilers, none of which should address the plot of the game.

1) Finish It! (don’t wait to finish the main story): Not knowing exactly what happened after one “beats” the game, I held off on completing the main story quest until I was almost lvl 34.  What I didn’t realize is that virtually NOTHING changes.  The world remains (almost) exactly as it was before the “events” of the endgame take place.  Finishing the game arms your Dragon-born with a salvo of powerful shouts (including Dragonrend).  So don’t wait another moment… plow through the main story so you’re better equipped to deal with everything else out there… and there is a lot.

2) Take up Smithing Early : By now everyone knows you can craft daggers all the way to 100 smithing rather quickly in the world of Skyrim, but I made the mistake of not picking up smithing until I was around lvl 45.  The legendary and epic armors that can be crafted are by far the best in the game, and are far better than anything you’ll EVER get as a quest reward.  Combine 100 smithing with 100 enchanting and you’re looking at becoming an unstoppable juggernaut of a Dragonborn.  Sure, these skills don’t make you feel like a badass in the beginning, but trust me, when you’re able to punch an entire bandit cave to death with your bare hands without losing an inch of health… well… you’ll see.

3) Followers Don’t Level!: As it currently stands, the dozens of potential followers you can obtain in Skyrim DO NOT LEVEL.  As of the latest patch, Companions have their levels locked in place based upon what level YOU were when you discovered their area.  While this may seem like small potatoes right now, it actually means that as you explore the world of Skyrim you’ll be limiting the number of high-level followers that can actually assist you in your adventures later, without simply being dragon-bait (elder dragons bring the pain).  Heck, I’ve seen players struggle through dungeons with a low-leveled Lydia simply because Bethesda didn’t really state that this is how the system currently works.  Find out where some of the best followers in the game are, and stay away until you’re really ready to “unlock” them. Quarantine Zone!

4) Stealth Brings the Fun: I didn’t pick up stealth and 1 handed weapons until around lvl 35, but boy had I been missing out.  There are perks and items that allow for 30x damage sneak attacks on unaware targets.  While rolling with this build I was able to 1 shot a Dragon Priest boss as well as the majority of humanoids in the game.  Do I need to mention that the assassination animation is incredible?  If you’re too far along into your game to switch things up (I waited until 2H was at 100 before I tried something new), then I really encourage you to roll another character simply to partake in a GREAT stealth gaming experience.  It’s incredibly fun.

5) Do ALL the Guild Quests… They’ll Never Know:  Oh Skyrim… a world with no internet, and only one pimply faced courier.  I discovered that in Skyrim you really can be everything to everyone, and the citizens of the world will have NO clue.  By the time I wrapped up my adventure (for now), I was the Archmage of the College of Winterhold, the Guild Leader of The Thieves Guild, the Harbinger of the Companions, the Legate of The Imperial Legion, the Listener/Leader of the Dark Brotherhood, and a member of the mysterious Blades.  None of these organizations EVER had any clue what I was up to while I was out of their line of site.  My advice, do it all because there is no reason not to.

Thanks!  Let us here at NA know what you think!

X-Men Destiny is upon us

A game that we previewed on our very first podcast, was it worth the wait?

ID’s RAGE: Do we still need celebrities to plug our stuff?

We received a press release this evening from ID: Software that contained a link to a new commercial for their upcoming post-apocalyptic FPS, RAGE(we actually talk quite a bit about RAGE in Rated NA: Episode 24). This new commercial highlights NBA Rookie of the Year Blake Griffin who also plays forward for the L.A. Clippers and won the 2011 NBA Slam Dunk Content.  L