Years ago when the folks at Epic unleashed Horde Mode in Gears of War 2 they unknowingly set a new standard in multiplayer gaming. The concept was a simple one, take your best friends in the world, strap a lancer in their hands, and spit them into a no hold’s barred battle for survival. Surviving all 50 waves of Horde Mode REQUIRED communication, skill, and a bit of blind luck. Even years after the release of Gears of War 2, Horde mode is still incredibly popular on X-box live. Horde was so much fun that every shooter on the planet tried to copy it’s magic. Big games such as Halo Reach, Bulletstorm, and Transformers WFC “borrowed” the idea of wave survival with mixed success. Due to the massive amount of information coming out of E3 (it’s pretty insane), Horde 2.0 was slightly overlooked. We went ahead and gathered up all the information we could find and placed it into one easy to follow FAQ. Short version: this is incredibly awesome..

So what is Horde 2.0? – The new version of Horde mode appears to be a much deeper, much more strategic version of Horde mode. The biggest change is the addition of credits. Each enemy unit type gives the player a certain number of credits which he/she can then use to buy fortifications and upgrades for items/turrets.

Do we all share these credits? – No, each player has their own credits and can build their own stuff. That means that if you’re the teams all-star you’ll be able to build things faster than the team’s resident Carmine.

So wait, we build stuff now? – Yep, you can actually build a wide variety of items from barbed wire to Silverback Mechs. Different upgrades become availiable as you gather more credits from kills.

So it’s sort of like an RTS? – More than you realize. Players will actually choose an area of the map they wish to fortify by picking a starting command post. It’s then up to you and your friends to hold that command post for as long as possible.

Can you take multiple areas on map? – Yep, from what we hear you sure can. As your party gains more credits it’s possible to purchase another command post on the same map and set up a second outpost, or fire-base, as you see fit. Although from my experience with Horde, splitting your squad is generally a bad idea.

So can you build anything anywhere? – Nope, in order to stop players from building a wall of turrets there are predefined areas in which you can build stuff. Green outlines appear on the map in between waves. You can only build in the pre-determined areas.

Can you buy weapon spawns? – From what we understand .. yes. Multiplayer footage shows green weapon silhouettes meaning that if you’d like to use that One-Shot, you’re going to have to save up and buy it. No more hogging the hammer of dawn.

How much time do you have to build between matches? – Less than a minute. You have to think quick and build faster. The next wave is worse than the last.

Can I repair damaged barriers and stuff? – Sure you can, it costs less to repair than to replace. Like real life. 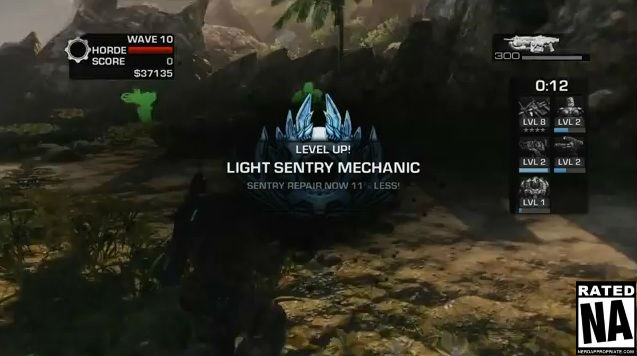 Can we pool money if we want to? That Silverback Mech looks awesome – Good question! And yes you can. If you want to pool your money you can all chip in for something that you can all use to survive. You can share ammo as well, this is a group effort after all.

So who are we fighting? – The good news is no session of Horde 2.0 will ever be the same. While Horde 1.0 was a lot of fun, everyone knew that on every 10th wave you’d be forced to deal with Blood-Mounts and therefore acted accordingly. It took a little bit of the raw excitement out of the match. Horde 2.0 mixes that up by giving you three very different enemy races to contend with, all with very different behaviors.

Three enemy races.. what the? – The waves will consist of three different factions, The Locust (that we all know and love), The Lambent (that explode), and The Savage Locust (That have broken free of the Queen’s influence)… oh and boss battles…

Boss Battles? No way! – – Way! Every 10th wave will have a random “boss” from the Gears of War universe, from Brumacks to General Raam (I hope). 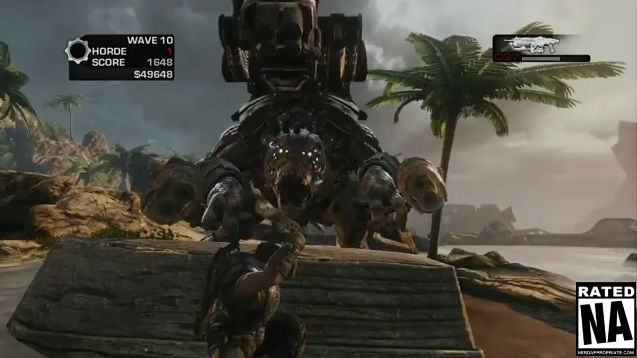 I think I peed’ a little is there anything else? – Well, there are these things called “mutators” that we don’t know much about yet, but what we DO know is that if you complete various objectives in a set amount of time during horde you get bonus items, credits, and more.

What sort of Objectives? – Things like, “perform 10 executions within 2 minutes” , nothing to worry yourself over.

So there you have it. Gears of War 3 is set for release exclusively on the X-Box 360 on September 20th 2011. From what we’ve seen and played so far, it looks to be THE multiplayer experience of the year. We can’t wait.

Seems like we just can't get enough of Mass Effect around these parts. Just learned…

Hero Academy has become a bit of an obsession here at Nerd Appropriate HQ. Creators of Orcs Must Die, Robot Entertainment have managed to craft an incredibly fun and addicting asynchronous iOS strategy game. Like any great strategy game Hero Academy is simple to learn, but challenging to master. Game play is an epinephrine infused game of chess, mixed with the random nature of Magic the Gathering.