I decided to check out Bayonetta after Ash had written about Platinum Games recent title, Vanquish, and how both titles were largely overlooked. Bayonetta, to my surprise was quite enjoyable — the combat and combo system is excellent, giving the player a real sense of control over the fluid movements of the character. If you need a reference point for character control done horribly I would point you to Southpeak Games pile of bantha poo-doo, X-Blades (other infamous titles include Velvet Assassin, and Monster Madness). Anyhow, Bayonetta’s graphics and character animations are fantastically anime inspired, including the combat cutscenes. Bayonetta is also challenging, with typical hack and slash boss fights, where you are required to memorize the 3 or 4 attacks of the boss in order to effectively beat them… challenging, but not impossible. A seasoned gamer might complete the story on Normal in about 15 hours or so. But in the world of Japanese-style games, completing (read: enjoying) the story is never good enough, and that’s where I take issue.

Beautiful right? Well, you're on a timer so get moving.

In a very early post on this website I commented that one of the things I enjoy most about video games are the stories in the campaign. I’d be willing to tolerate certain game play aspects or development studios trying out new gameplay mechanics as long as I get hooked into the story. Bayonetta almost defeated my spirit with its arbitrary scoring system, which lends itself to a whole host of problems typical of many Japanese-style games. So let’s break it down: 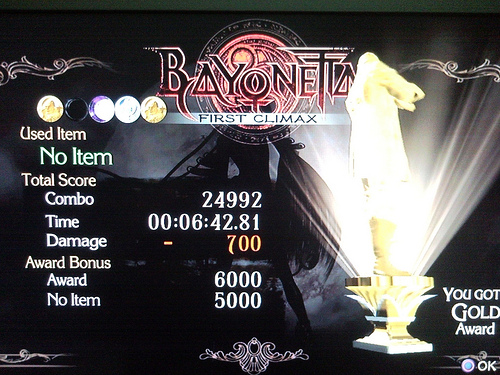 Ohhh gold is good... but you can still do better with Platinum.

Scoring System: So what is my goal in the game… to beat the level? The game displays a score at the end of each level, and awards you a medal on your progress. What is this, 1985? Are we still keeping scores within our action-adventure video games? Over the course of playing all of the Super Mario Bros series combined I probably looked at the score a total of Zero times… ok, I looked at the score, but only to get fireworks at the end of the level. Bayonetta even goes so far as to have a leaderboard online. Let’s be honest here, the leaderboard is worthless and just a cheap way to add value to the game. Oh what, am I 36590 out of 125629 players?… that’s… great. I’ll tweet that. If you put 200,000 monkeys in a room someone is bound to find an exploit, which they promptly use to game the scoring system, at which point you’re no longer playing the game… you’re just being a d-bag. Exploits are not unique to Japanese games, but the single-player scoring system puts this in my face when I’d rather not see it. Scoring systems have their place in other games like fighting, arcade, and music games, but IMO they are a detriment to the action-adventure genre.

Time Attack: Hey, did ya beat Resident Evil… wasn’t that a great story and game experience? Now, how about you do that again in 2 hours. Of course, that will require you to memorize  the layout of each area, including where to go and what to do. Also you’ll need to memorize each boss fight and calculate your cost/benefit tradeoff for your inventory slots to meet the time deadline. Bayonetta will play the same way, if that’s what you want from it, but you’re doing it at the expense of enjoying the story and stripping the game of any immersive purpose, reducing the game to a mere arcade experience. Personally, I like to enjoy the world created by the designers and how the narrative adds to the world and its characters, I’m not looking to rush through it. See also: Metal Gear, which is a phenomenal series of games, but I’ve never heard anyone recommend that game based on its Time Attack aspects. Conversely, time and scoring ruined Dead Rising 1 and Lost Planet for me (I’m looking at you Capcom).

Trophies & Medals: Scoring systems, alone, are more or less arbitrary. Its a relative scale, as opposed to an absolute scale… that is, until you assign a medal to the score. In Bayonetta, your medal is based off of a composite of your combat score, time to complete the level, and number of times you died (which includes a penalty for using items, that’s harsh). Many times I found myself finishing a challenging boss fight and thinking, “hey, that was tough but fun”. Well, apparently in the eyes of the game having fun isn’t good enough, because I won myself a number of “Stone” trophies, meaning worse than bronze. To add insult to injury the Stone trophy is in the figure of the short-stocky-American-caricature character in the game. (You know, the one that looks like Danny DeVito and sounds like Joe Pesci… every great Japanese game has a fat bumbling American in it. Thanks for that.) Its as if to say, thanks for beating our game, but you play like a fucking moron. Can’t I just turn the scoring system off? Nope, you need those points to buy store items to progress through the game. 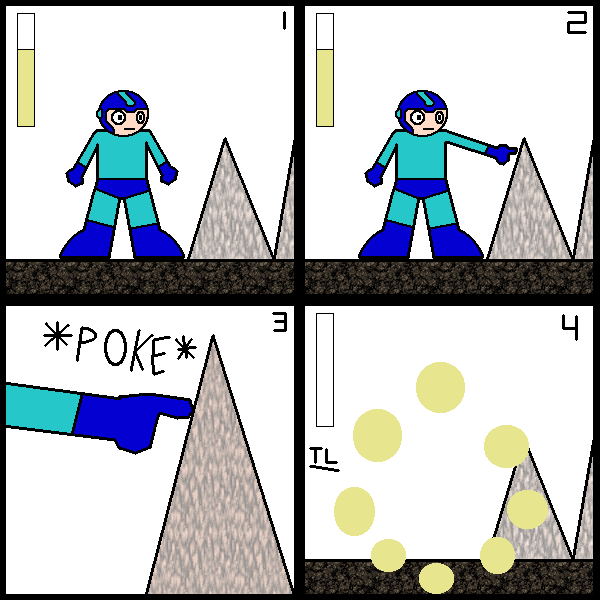 Instant Death: Why give me a health bar if I can’t use it? There are some key timing moments in Bayonetta, which, if you are not prepared for, will kill you outright. It adds a death to your subscore, and reduces your over all trophy score. It’s an unbalanced system… dying after a 20 min boss fight is somehow the same as missing a quick-time button-action moment. The effort doesn’t match the result. And if you want to get technical, I’m pretty sure MegaMan wouldn’t actually explode from touching the side of a spike versus falling directly on it… and aren’t those boots made out of metal anyhow? (Again… I’m looking at you Capcom).

Pointless Collecting: For some reason, Bayonetta had me keeping an eye out for crows, which glowed red in the environment. I had to run up and quickly press the X button to catch them before they flew away. I don’t know what plot device this served, and even now I have no idea what the benefit was for doing this. It’s always something: snap all these photos, collect all these stars, find all of the documents, etc. This has spilled over into American games as well… why am I collecting Cog tags again? As I mentioned in the Epic Mickey review, collecting preys upon the OCD and Completionists, offering very little extrinsic reward. I think the scientific term for this is Shiny Ponyta Syndrome.

For beating the game you can play the game again: After beating Bayonetta on Normal you unlock Hard mode. Why wasn’t Hard mode unlocked from the beginning… I think there’s even a difficulty level above that. What is the purpose of designing unlockable difficultly into games? Perhaps designers want to force the user into a predetermined game experience so that they are not discouraged by attempting to play on Hard. And while we’re on the subject: how many levels do you need anyhow? Very Easy, Easy, Normal, Hard, Hardcore, Climax? How do you even differentiate… damage, number of enemies, number of saves, continues, etc.? Again, this usually equates to simple modifications that just seem to attempt to tack on value to games. It’s to be expected from Bayonetta, but difficultly shouldn’t be unlockable in other games like Alan Wake, and isn’t even necessary in Dead Space 2 which is great on its own merits. It’s not always unlockable difficultly either — your reward for beating Super Mario Galaxy 1? Play through the exact same game as Luigi… are you serious? The exact. same. game.

Use scoring to supplement narrative, not get in the way of it.

Do scoring systems have any place in action-adventure games? IMO, sure… if it fits with the narrative. Platinum Games also made Madworld, which reminds me of a Smash TV + The Running Man mash-up. The story takes place in a game show of sorts, so scoring the effort makes sense in the context of the story. It doesn’t make sense in Bayonetta or some of the other games mentioned here.

I’m just one gamer with an opinion. I prefer the story over the arcade experience. And, when there is a story to enjoy, I don’t need to enjoy it harder than the next player by getting platinum medals and trophies. Modern games are so meticulously detailed that rushing through them in some optimal, predefined pattern is almost the opposite of what can be fun in them now. My friends and I have logged onto Borderlands and just dueled with one another and tried to do crazy things with the vehicles. There’s no “point” to it other than to have fun. Don’t get me wrong, games that have these aspects like Bayonetta, Metal Gear, and Resident Evil are still great games / series; there are just certain aspects that I take issue with. In other games, the scoring system has given way to XP systems, where effort is invested into the improvement of the character, requiring you to take a calculated approach to developing abilities and stratagies on the fly, not due to memorization of multiple play-throughs. I’d take that any day. So how about your keep your time attack, scores, and collecting, and just let me enjoy your game? Rant ended. 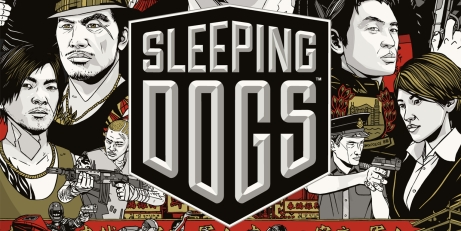 Tonight Microsoft is hosting a live event on XBL (8pm EST / 5pm PST) that promises to reveal some new details on Gears of War: Judgment, including the new Aftermath and Survival modes. Viewers will also be able to influence the content of the live broadcast by sending tweets with the #GearsJudgment tag.