I’ve managed to avoid all the reviews for Dragon Age 2.  It has been impossible however, to avoid text messages from friends asking me ” Is it any good?!… I don’t know what to believe!”   Dragon Age 2 is good, very good… And here is why.

Dragon Age II isn’t your typical RPG.  There is no “big bad”, there is no “blight”, there isn’t even an actual threat until the third act of the story.  That being said, you don’t spend 60+ hours sitting around your mansion drinking tea all day either.  You play as Hawke, a survivor of the blight, and refugee of Ferelden.  Now if you haven’t played a Dragon Age game before, A lot of the words I’m going to use are going to sound like another language…hang in there.  I should also state that playing DA:O isn’t required before you play DA:2, but like Mass Effect you won’t get to import your game and all of the major decisions (like who is king) will be made for you.  If you don’t care about forging your own DA experience, then don’t bother finishing DA:O.  The heart of the controversy is the “Framed Narrative“.  The Entire game (60+ hours for me) takes place over 10 years and is told from the perspective of one of your companions Varric (“the midget Han Solo”).  Varric will embellish the story on occasion, and will lie to his interrogator, often times for a laugh.  The bulk of the story takes place within the city of Kirkwall, a massive city built by slaves to the far north.  Over the course of ten years, your character, Hawke will make his/her way up from a lowly street urchin to “The Champion of Kirkwall”, but it takes about 50 hours to get that title. 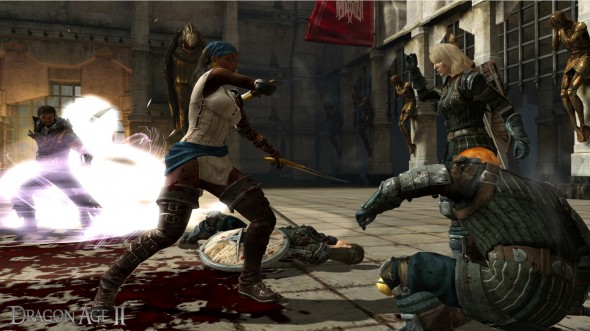 Just because there is no main villain does not mean there is no villainy.  The bulk of the conflict is very political in nature.  There are countless parallels between actual world history, and the world of Dragon Age.  So much so that they went as far as calling something “The Tranquil Solution”.  For those that are unfamiliar with Dragon Age, they put an interesting spin on the world of magic.  Mages (spell casters) are born with their abilities and are not “free” in this world.  All mages are under the constant watch of the Templars, the military arm of the Chantry (Church).  Mages are forced to report to a “circle” in order to learn their powers, and spend their entire lives under supervision.  It’s like being under house arrest forever.  Mages that go “on the run” are given the title of “Apostate”, and are constantly hunted by the Templar.  The reason the Templar are so eager to lock the mages up is due to the presence of “Blood Magic”, a forbidden but incredibly powerful form of magic that requires the users blood, and has the capacity to summon demons from another dimension.  Templars hate blood mages, and the punishment is often death.  Over your 10 year stay in Kirkwall you will eventually have to pick a side, do you help the mages that want to be free and risk a demonic takeover, or do you side with the Templars and force mages to live their lives under constant watch?  This and hundreds of other decisions make up the bulk of the plot of DA:2.

The best portrayal of a Dwarf in game history

This is where the game really shines.  From the beginning of the game to the very end, you realize that you’re not in this alone.  Kirkwall is a living breathing city, and the people that accompany you on your journey are very real.  Dragon Age 2 has some of the best companions in the history of RPGs (Rivaling even Mass Effect 2).  The conversations your characters have while out on adventures are incredibly enjoyable.  Bring two characters that don’t get along?  They’ll argue… Bring two characters that have similar fundamentals? They’ll joke endlessly…  Force two characters that hate each to fight evil together… eventually they’ll warm up and be best of friends.  It’s remarkable.  Because the game takes place over a decade, your companions change and things happen.  It’s never jarring, and always done quite well.  For instance one character, whom you helped get a date, gets married and starts to settle down.  This of course does not stop him/her from still going on adventures and stomping evil.  No more mad dash to destroy that big bad.  There are more twists and turns than I can even mention, and writing a spoiler free review is a huge challenge.  Talk to your companions, often, and they’ll have your back.  Betray them, and they won’t… it’s pretty simple.

This is probably what got people upset. Dragon Age has moved away from its roots.  Gone are the days of slow, turn by turn battles.  In it’s place we get a fast paced, often hectic, battle system that does what it sets out to do.  When we talked to Mike Laidlaw at Comic Con last summer he mentioned that he wanted the player to “hit the button and have something cool happen“, well they did it.  Virtually nothing has changed from DA:O to DA:2, except the speed and power of the player and his enemies.  There is still an auto attack (now executed with a button press), and you can still map your abilities and spells to whichever button you like, and can still build your character in any way that pleases you.  By the end of my playthrough, I was able to take on 10 enemies by myself without working up a sweat.  It’s a new form of combat that I find incredibly fun and addicting.  The graphics have been revamped. The player animation is spectacular when executing magic and special attacks. Who doesn’t like running headlong into a cluster of enemies and watching them explode from a single sword swipe?  That’s awesome right?  Watching Christinabot play she opted to be a force mage, and looked incredibly Jedi like while hurling enemies around the city and slamming them into the ground. Good stuff…

The Empire of the Franchise (Spoilerish?)

This isn’t a game for kids.  It is the dark middle chapter of a much larger story, and depending on what decisions you make, it can be a very dark chapter.  The game ends with the world at war.  Not even the Blight was as bad as what happened during the events DA:2.  Now, there is a clear rift between Church/State/and Magi all of which are vying for freedom, or to regain control.  On top of all this, both the hero of Ferelden (Leader of the Grey Warden), and the Champion of Kirkwall (Hawke) have gone missing while the world is being torn to pieces.  Morrigan is still missing in another dimension while raising her Arch Demon baby.  I have a feeling we know how this is going to end … A world at War, with you stuck in the middle.

Where they “missed the boat”

The events of DA:O were epic in nature.  The Arch Demon, the battle of Ostragar, the death of a king, the fall of the Grey Warden.  All of these events are big enough to be their own game.  In DA:2 the game is much smaller in scale.  You’re trying to prevent a civil war in a relatively small town while putting food on the table for your family… it’s different.  While characters from DA:O and DA: Awakening do make cameos in DA:2, for the most part they stay out of the spotlight.  Fan favorites such a Wynn (is she still kicking?), Sten, and Morrigan are nowhere to be seen.  The Grey Warden also have little role in DA:2, and since there is no blight are forced to stay out of the political matters of Kirkwall.  Some of the Cameos are great, but incredibly are brief and carry little weight.  Would it have killed them to have them port in your character from DA:O to meet your character from DA:2? That to me seems like something that would have been amazing to see… To just kick back  as Hawke at the Hanged man and have a beer with the Grey Warden…  Cool right?  Shame on you Bioware.

I loved DA:2, but I’m also a Dragon Age “fanboy“.   The story isn’t as moving or straight forward as DA:O, but still manages to be a blast from start to finish.  We may never know the full story on how this game came out so soon after DA:O, or why it is the way it is, but embrace change and get used to it!  Hopefully Dragon Age will be around for a long while. 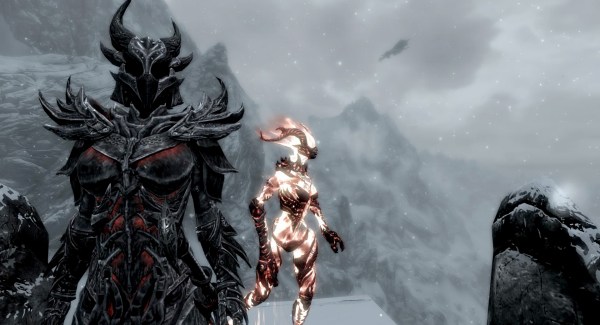 Skyrim: Saving the Best for Bad – Does Skyrim Reward Players for Being Evil?

The robed monk wondered what my characters future would be now that I have become one of the most powerful individuals in Skyrim. Would I be remembered as a hero, or something far far worse…. great question.

Mass Effect 3 will be here before you know it, and fans are salivating over…