The night I saw Batman… and got engaged.

I was born in Chicago. While my Mom and Dad migrated to Florida when I was young, a majority of my family still lives in Chicago. To me, it felt fitting to ask for my girlfriend Kristin’s hand in marriage there. The city and I have history. Since we’re both big Batman fans, when it was announced that Christopher Nolan and crew were filming “The Dark Knight” there, it seemed like a great opportunity to kill two birds with one stone. I was hoping to come back home with a fiancé and maybe a few set pictures. After doing a bit of research, I found out they were going to be filming throughout the summer of ’07 so I convinced Kristin that it would be fun to go up to spend the 4th of July with my family, see the Windy City and try to find a Batmobile or something.

The city seemed to be taken over by film crews.

Filming notices were taped to lamp posts and fences around just about every corner. To avoid being bothered too much by fanboys and passersby, the film was shot under the code name “Rory’s First Kiss”, Rory being Nolan’s son. You’d have to be completely oblivious not to realize it was a fake title though since Gotham City Police Department cars and vans lined the streets surrounding the production lot. You couldn’t walk more than a few blocks without being reminded that you were in Nolan’s Gotham City. Since the filming took place all over Chicago, it was necessary to put up strategically placed signs to direct the crew from the production lot to the filming locations.  The bright yellow signs they posted simply said “RFK” in big bold letters and either had a left or right arrow underneath.

If this was an article about how to propose to your girlfriend, I’d go into detail about that but since it isn’t, I’ll just say that she said “Yes”. After the proposal, we went back to our hotel. She wanted to call her family, and I wanted to check my forums and see where they were filming that night. After she’d called everyone she knew and settled down a bit, we headed to Hotel 71. According to my sources, the top floor was being used as Bruce Wayne’s penthouse.

We arrived around midnight…

…which turned out to be the cast’s dinner break. We found a bench by the entrance and took a seat. The set was busy with crew members rushing around with tape and light meters hanging from their tool bags. We tried to look as casual as two people sitting on a bench outside a hotel at midnight could possibly look. After sitting around for the better part of an hour, we started seeing GCPD Swat Team members come from around the corner and start filing into the lobby of the hotel. Next we saw the man himself, Christopher Nolan, walk past us. Before he could make it in, a couple of lurkers on another bench leapt to their feet and approached him for a picture. Not more than a few seconds after the flash went off, a security guard told them they had to leave the area. Their excitement had gotten the better of them and gave them away.  We knew we’d have to be cool or we’d share their fate. 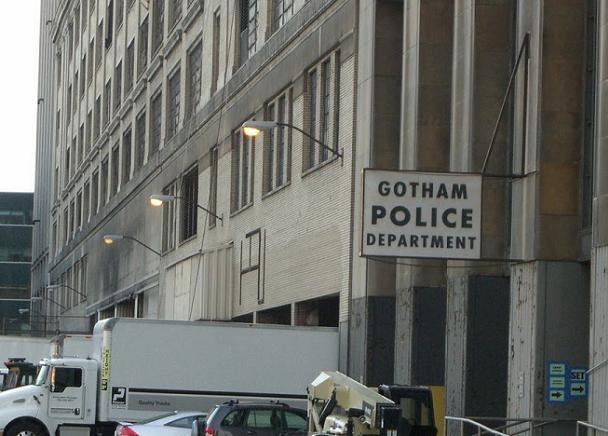 A few minutes later, an SUV pulled up to the hotel.

The back passenger side door opened and Lt. James Gordon (Gary Oldman) stepped out and was quickly rushed inside. We sat patiently waiting for something else to happen. Twenty minutes came and went and nothing happened. We had almost given up and started to leave when another SUV pulled up. In the passenger seat, I could see someone’s sitting with his feet perched up on the dash. The door swung open and a guy stepped out. He was wearing sweat pants and a t-shirt. As my eyes scanned down, I noticed he had the strangest looking boots I had ever seen. I took another look up and realized that it was Christian Bale. He clearly had the lower half of Batman costume on and was wearing the sweat pants in an attempt to hide that fact. He looked around for a moment and strolled inside. After a few minutes of disbelief, Kristin and I stood up and made our way back towards our hotel. On the way, we past a lamp post with one of the “RFK” signs and without questioning whether it was a good idea, we tore it down and I casually walked back to our hotel with it under my arm. We spent the next few days walking around the city. We stopped by the old Chicago Main Post Office that was converted into the Gotham National Bank. I got into a bit of a yelling match with a security guard there. He was less than happy that I was taking pictures of the GCPD sign around the corner but it didn’t stop me from snapping a few more as we walked away. 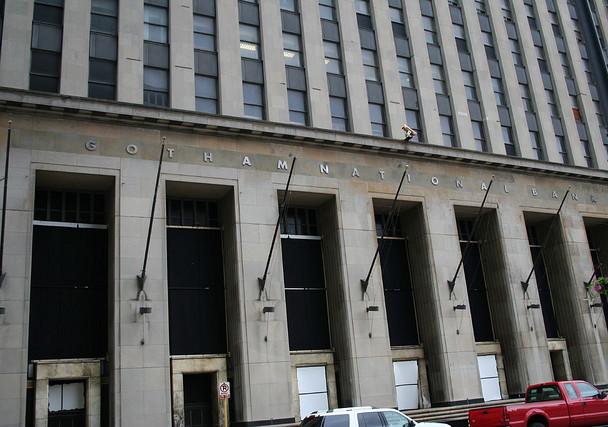 We eventually had the “RFK” sign framed and it’s been hanging on our wall ever since. Whenever the story comes up, people usually ask if we saw Heath Ledger and unfortunately we didn’t. I’m okay with that, though. Seeing Christian Bale in person spoiled the illusion for me a little. It was hard for me to believe that some regular guy that kicks his feet up on a dashboard while driving around could be a superhero. Not seeing the Joker meant that the character that Ledger presented on screen was more than human. He was a force to be reckoned with.

Joss Whedon’s Cabin In The Woods Finally Premieres at SXSW!

My name is Matt and I…am a Google fanboy