With all of the buzz surrounding the recent announcement of Nintendo’s other squid-inspired game, you may have missed the release of The Game Bakers’ SQUIDS Odyssey on the Wii U and Nintendo 3DS. SQUIDS Odyssey combines the original mobile adventures of SQUIDS and SQUIDS Wild West with the addition of a new campaign, a new character, and additional hats to upgrade and customize your party.  And as one might expect, this excellent mobile experience feels right at home on the Wii U and Nintendo 3DS.

For those that are unfamiliar with the series, SQUIDS is a turn-based strategy game with RPG elements. You control your party with a slingshot style mechanic similar to that found among the Angry Birds, but instead of launching from a horizontal 2D perspective, SQUIDS battles unfold on maps from a top-down perspective. I’ve seen others describe the strategy as akin to billiards or shuffleboard… so I’m going to go with the curling metaphor for my review. 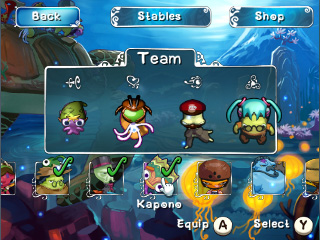 There are four classes of characters, each with their own special ability and balance of attributes. Characters are unlocked through story progression, and leveled using currency gained throughout the missions as well as hats found throughout the game. Encounters unfold over unique maps and multiple campaigns, resulting in over 90 missions (There are also 3 bonus objectives to complete in each mission). It’s an amazing amount of content for any title, let alone a downloadable one, to be sure.

While enemies are damaged primarily through physical contact, the special abilities, which include AoE and ranged attacks, are the spice of life in SQUIDS Odyssey. The strategy of team composition, turn order, and spacing within the environment provide a variety of ways to approach the missions, based on your play style.  (See… my curling metaphor held up fairly well, no?!)

Transition to 3DS and Wii U

I was particularly interested in taking a closer look at SQUIDS Odyssey on the 3DS, mainly because of the always-present two-screen experience. While the Wii U also benefits from a dual screen experience, using the Wii U Gamepad is not always a requirement. Also, I wanted to see how the addition of the 3D screen impacted the visual experience in the game. Like it’s mobile predecessors SQUIDS Odyssey has a beautiful visual and auditory presentation. The 3D effects are a welcome addition without being overbearing or getting in the way of planning your strategy.

On the 3Ds the main game screen appears on top, while character control and other UI elements (inventory, end turn, etc.) are located on the bottom screen. Here, the benefit of a second screen is immediately apparent. With a second screen it is possible to get a shot lined up without obscuring the game screen with your hands. Of course, the stylus is also available for even tighter control (the maps are very well crafted, with their own hazards, so precision is often the key to success in SQUIDS. A misaligned shot can quickly the result of your character falling into the abyss). 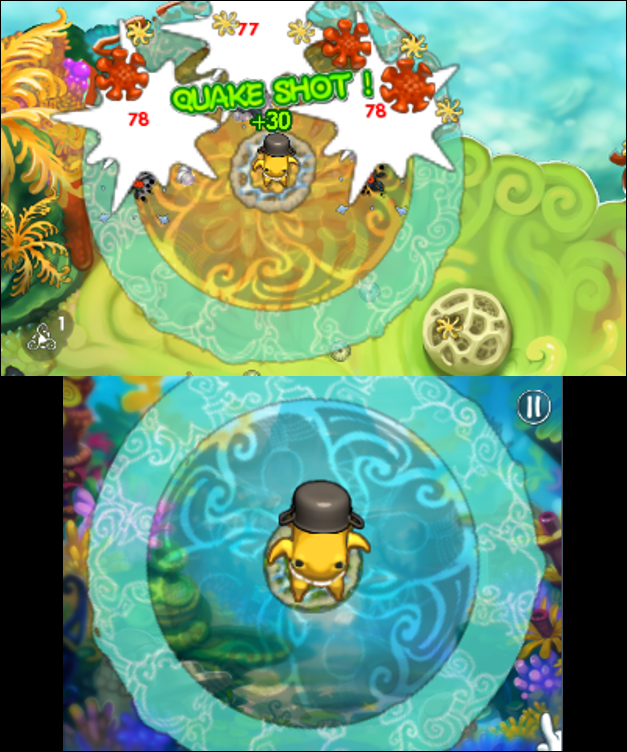 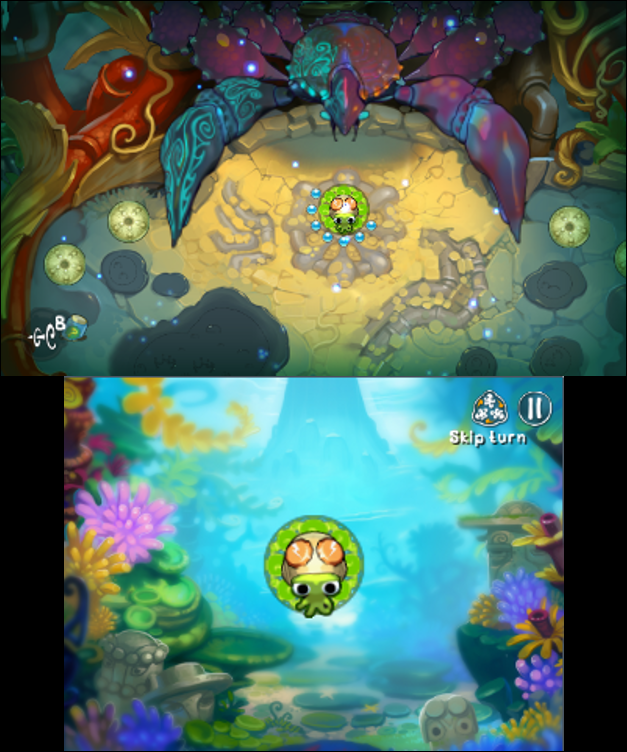 Another advantage over mobile is the presence of physical controls. While The Game Bakers have carefully crafted the SQUIDS games to make excellent use of the (mobile) touch screen, the physical controls of the 3DS are surprisingly helpful. The 3DS thumb-pad’s natural pull back toward the center is an excellent analog for the slingshot mechanic. Navigating the map with the d-pad and shoulder buttons is a quality substitute for pinch and zoom on mobile.

Also, here’s a pro tip for advanced SQUIDS players! The “scout” class characters (above, right) have a “dash” ability, which is activated after the character is launched. On 3DS, it is possible to change the direction of the scout, mid-flight, by using the circle / thumb pad to change the orientation of the character, then activating the dash. Honestly, I’m not sure if such a maneuver was possible on mobile, or if this is even intended on the 3Ds — but it’s a solid feature, nonetheless, especially for those tricky speed objectives later in the game.

For both new and expert players alike, SQUIDS Odyssey is one that you want to get your tentacles on. SQUIDS Odyssey offers challenging game-play that can be enjoyed in both bite-sized and in-depth experiences, while providing a great depth of content, strategy, and customization. SQUIDS Odyssey easily finds a place among the top games on the Nintendo eShop.

Is the new DLC worth your soverigns? We go into the deep roads to find out!

Who ever thought that seating people next to one another could be so much darn fun?!