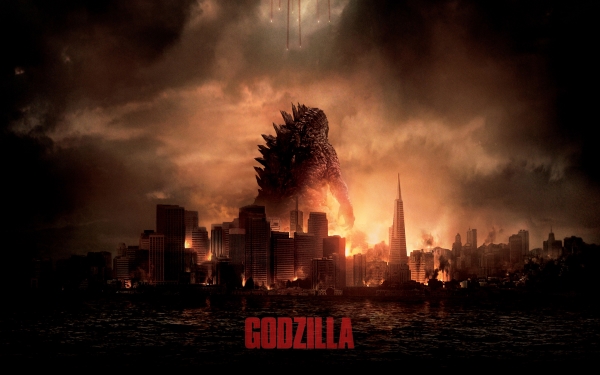 Born in post-World War II Japan, the story of Godzilla was an allegory for nuclear weapons; a consequence of humanity’s meddling with destructive powers we barely understood. Today, the fire-breathing brute is a beloved pop culture icon not only in his native Japan, but the United States as well. For decades, the Toho company held the rights to Godzilla. The first American effort to capture the monster on film in 1998 was considered a critical and commercial flop. The latest effort by Gareth Edwards, released to coincide with Godzilla’s 60th anniversary, fares much better than its predecessor, though it is not a film without flaws.

[Yarrr… there be mild spoilers ahead mateys! Sail south for safe passage!]

The plot is erratic and thin, trying to get us to invest in characters who provide the human point of view to the monster mash-up. The actors are great, so it’s sad to see the talent on-screen wasted by the writers on choppy scenes and semi-serviceable dialogue; it’s hard enough to compete with a co-star who towers over skyscrapers. The story begins in 1999 with American nuclear engineer, Joe Brody (Bryan Cranston), and the destruction of the Japanese nuclear plant which tears apart his family. The movie hops forward in time to present-day San Francisco, California to introduce us to the engineer’s grown son, Ford (Aaron Taylor-Johnston), a bomb specialist for the U.S. military, and his family before whisking Ford off to Japan to bail his father, now believed to be a paranoid conspiracy theorist, out of jail. From there it’s trespassing, and more detainment, as the duo cross paths with Monarch, a secret organization which has a special interest in the destroyed site of the nuclear power plant. Led by scientist, Dr. Serizawa (Ken Watananbe), Monarch and the Brodys’ soon find they have bit off more than they can chew and it’s time for the films real star to step into the limelight.

It’s an hour, or so, in to the film we before finally see Godzilla, though he is not the first monster to appear. Once he does show up, Godzilla looks FANTASTIC. Unlike Roland Emmerich’s film, this one does not try and reinvent Godzilla’s classic look. It is tweaked for CGI, sure, but there is no mistaking the big guy once you see him. What is rendered on-screen is clearly tip-of-the-hat to the rubber suits which gave us the monsters classic look. It is worth the price of admission to hear his roar alone in a surround sound theatre. Chills I tell you, chills.

[Ye’ve made it through the storm!]

Overall, despite my minor quibbles, I thoroughly enjoyed the film though! Unlike last year’s childhood summer film reboot, Man of Steel, I did not walk out of the theatre with mixed feelings, I was gleeful! The film captures the essence of Godzilla, neither good nor evil, but a pure force of nature. Like hurricanes, tornadoes, floods, and landslides, Godzilla serves a purpose: bringing balance. However, the side effects of fulfilling his purpose can be chaotic and destructive, to say the least; Godzilla hurts as much as he helps. While not fun for the fictional people standing in his massive wake, it is certainly an enjoyable experience for those watching in a movie theatre.