Transitioning video games to movies, or trying to, seems to be a big thing Hollywood wants to do these days. I’ve seen articles about the possibilities of movies based on Assassin’s Creed, Mass Effect, and, of course, the World of Warcraft franchise.  The idea of a World of Warcraft film is nothing new, but things have moved along far enough in development to actually name a director.
Speaking as someone who spent many hours immersed in Azeroth, I am skeptical of any attempts to translate this universe to film.  The World of Warcraft Is a huge world filled with many interesting environments and characters, but it’s also a world that I cannot see easily captured for the theater.  I do have however have some thoughts on what might could help shape WOW into a decent movie. 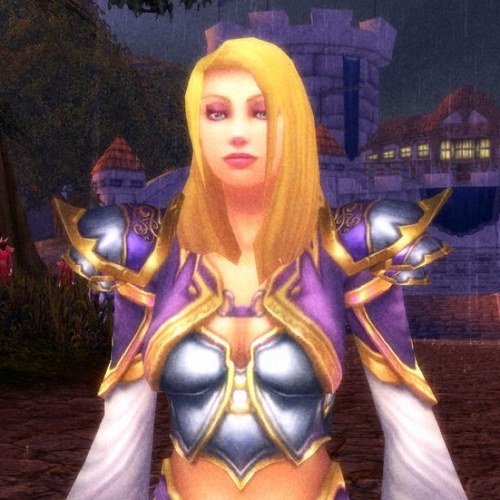 Consider making the Protagonist a Woman: Jaina Proudmore, Sylvanas Windrunner, Tyrande Whisperwind, these are some of the most powerful people in Azeroth, or at least were when I last played. Yet, I think any Warcraft movie runs the risk of some generic, white male, “chosen one,” coming-of-age fantasy story which we’ve seen played out a thousand times. Women play significant roles in shaping Azeroth, see the above examples, why not take advantage of it and tell the story from a woman’s point of view?

One more thing on women: Armor. It should cover things: If the people making this film ignore my first suggestion, fine. At least have what women do show up be wearing proper armor. Please? I have horrid memories of finding a delightful piece of armor, which was amazing statistic wise, and having it turn into a plate bikini once placed upon my avatar. How about no. Okay? Okay. I would find a lady in the full tier two paladin Judgment Armor quite appealing and so would many others.

No Outland: Illidan Stormrage was a badass villain, but damn. The Burning Crusade expansion was absolutely horrible on the eyes. Lots of glowing green, floating purple crap, and whatever the heck Hellfire Peninsula was. Ugh. I think sticking to Azeroth proper, though I wouldn’t complain about seeing Northrend at all, would be more appealing.

Pick a conflict and stick with it: There’s a lot of strife in Azeroth, it is the World of Warcraft after all. Alliance versus Horde, demons versus everyone, undead versus everyone, it can be complicated for an adventurer! Lots of movies try and shove every little reference they can in, but few do it well. I was mighty impressed the Avengers, while having a lot of characters, managed to not get bogged down in bloat. Given the huge amount of material a writer would have to work with, they need to stay focused in Azeroth. Maybe look at the downfall of Lordaeron, or Deathwing, a specific series of well-known events which are already established. Which leads me to my next point…

Plot over Eye Candy: I feel, given the need by directors/producers to create a spectacle, to squeeze every drop of eye candy they can in (e.g. The first installation of the Hobbit), a Warcraft movie is potentially a ripe target for being overburdened with visuals. Yes, it’s great you can show a massive orc army storming about, or the majestic elven forests, but do you really need to if it’s not moving the plot along? I like epic battles and beautiful settings, but I need more than a bit of flashy CGI to stay interested in a movie.

Movies, like video games, are never going to please everyone in the audience. We all have our preferences, some are stronger than others, and we all have our own expectations of a particular property. The tricky thing with translating video games to film is that the director is essentially trying to establish a singular point of reference to tell an audience a story. Its possible fans of a game franchise, who have spent hours playing, influencing plot, in that world may not share in such a vision because they’ve already created their own. Why go sit in a theatre when you can essentially control the story yourself? I’m willing to give a Warcraft movie a fair shake, especially since it sound like it is in the planning stages, but they’re going to have to offer me a pretty compelling reason for me to fork over my money.

What do the Nerds think of Nintendo’s WiiU?

So we watched Nintendo’s big reveal. The oddly named WiiU has been unveiled to nerds the world over. Like it or not, Nintendo now has a comparable system to the PS3 and X-Box 360, HD 1080p and all. Check out this nice long list of hardware specs, follow by our personal thoughts on Nintendo’s new system.