Let’s make one thing perfectly clear. I am an unapologetic Admiral Ackbar fan. Why? because he’s a Boss. He’s got a sweet swivel chair and in charge of the Rebel Fleet. He’s got more screen time and speaking lines in the original trilogy than Boba Fett, but gets a fraction of the love. Also, it’s easier (physically and financially) to collect Admiral Ackbar merch than it is other characters.

Imagine my joy, then, when I found out that the puppet wizards behind some of our favorite Star Wars characters were going to be doing a talk at Star Wars Celebration VI. Tim Rose (Ackbar) and Mike Quinn (Nien Nunb) were two of the most easy going, fun dudes and talked about their careers in the Jim Henson era of puppet magic.

The panel was hosted at the Digital Stage by David Collins, lead sound designer and voice director for Lucas Arts games, who started the talk off by asking about their initial involvement with Star Wars. Rose commented that he was originally brought on to perform Salacious Crumb, the crazy monkey-lizard at Jabba’s Palace. While on set he’d asked someone about Ackbar and was told that it was just another small character who would be appearing later in the film. Rose volunteered to take the part of Admiral Ackbar, and the rest was history.

Mike Quinn, meanwhile, egged Rose on with a series of dad-jokes early on in the discussion, “What is it called when you put your hands together in appreciation of something… It’s a Clap!”

Working on ROTJ required long days, Rose worked typical days of 730am to 9pm. He’d stay late — set up his own lights and camera, then practice the lines and review the performance until he was satisfied with his effort. Some of this film was found and is part of documentaries and bonus features.

Rose also remarked with a grin, “Salacious is definitely my alter ego.” More on that in a bit…

Rose and Quinn started their careers at a very young age. Rose remembers seeing A New Hope around 13 or 14, while Quinn stated he was 17 when he hung around the creature factories long enough to get a job. They studied under a legend, Jim Henson, working on projects such as the Muppets, Labyrinth and Dark Crystal. They’ve both been doing puppets and animatronics now for over 30 years and continue to do so even today.

“It was the days of King Arthur’s court when Jim was alive. I mean, it was just, you couldn’t believe how wonderful it was to work there. And that’s why it shows, it came through, we gave 110% because we absolutely loved the man.”

In the early days, these puppeteers would endure long hours and work conditions not permitted today. Atmospheric smoke used in Dark Crystal was carcinogenic, for instance. On Labyrinth, Rose was once in a full body costume, sweating in up to 95 degree temperatures. One day, Rose removed his costume for tea, and was covered in sweat… the crew opened the stage door to cool the room between takes. When the 45 degree air hit Rose’s back, all his muscles contracted and Rose hit the ground and was then rushed to the hospital… all in a day’s work.

When asked about the performances themselves, Rose says that working a puppet is like playing an instrument. You have to know all of the basic moves, but characters were often performed by an ensemble of puppeteers. With a tight knit group of performers, they would flawlessly play off one another (like Jazz music) to create something truly magical on screen.

There is a certain intangible quality to physical puppets over computer generated characters. You can see it in the screen actors faces, Mark Hamill’s performance with Yoda is often praised for his believable interaction with Frank Oz’ performance. Puppets over-emphasize their actions, which brings them to live. If a human actor were to act the same way, it would be akin to melodrama. 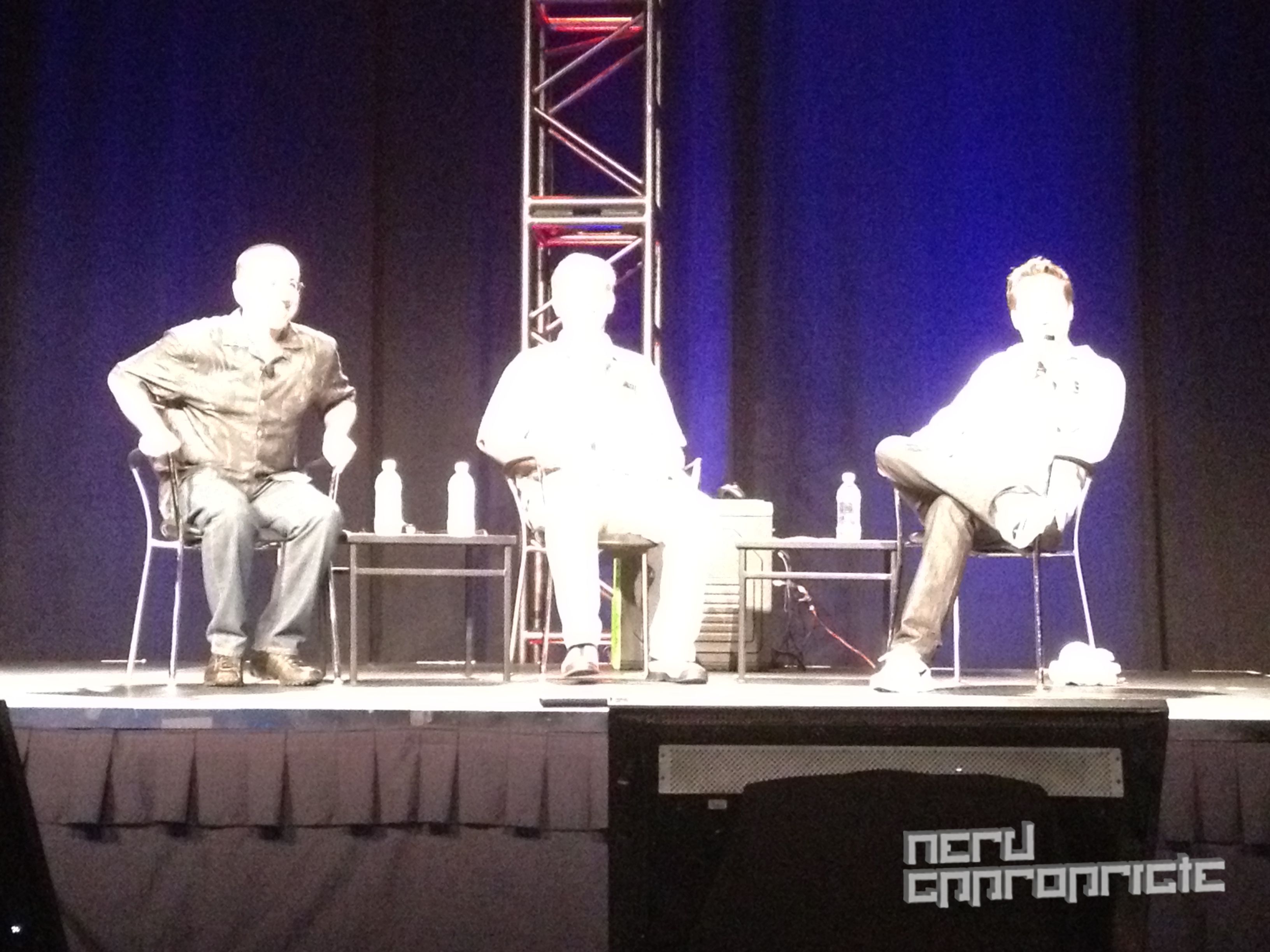 I was close to the stage… but the lights were closer.

Jim Henson and the Muppets

Not surprisingly, the conversation quickly turned to the Muppets. Rose’s favorite Muppet is Gonzo, Quinn is proud of all of the crazy background characters that often did not have speaking lines, but could steal a scene nonetheless. Both Rose and Quinn gave a heartfelt account of what it was like to work with Henson: Rose, “It was the days of King Arthur’s court when Jim was alive. I mean, it was just, you couldn’t believe how wonderful it was to work there. And that’s why it shows, it came through, we gave 110% because we absolutely loved the man.” Quinn: “The best times would be to watch Jim and Frank work on set performing Kermit and Fozzie … they’d just be trying to crack each other up.”

Rose noted that the vibe with the Muppets crew was a family attitude. People could make fun of one another and everyone had a good time. In the real world, however, Rose was actually fired from a few projects for the same, fun-spirited behavior. And, believe it or not, Rose pissed off Harrison Ford and was actually fired from ROTJ… sort of.

It all came about when shooting the scene in which Solo liberated from the carbonite and caught by Jabba’s gang. Rose and the rest of the crew had been under-stage in Crumb for about 4 hours before the first take. So when the curtain peeled back on the scene, the crew give it their all: “we saw you kissing, we saw you kissing!” After the take Harrison went over to the director and asked, “are these guys going to make all this noise over my lines, I don’t want to come in and overdub.” Take 2.

After the second, silent take, the director came over to talk to the crew under Jabba’s platform. As he often did the director would talk to Crumb… not Rose, about the latest take. The director asked “Crumb” what he thought of the last take, Crumb quipped, “Yeah, sounds alright. But this Harison geezer, is he going to talk during my laugh, because it’s really putting me off.” While Rose thought he was talking through the hole in the stage, the sound guy actually left his audio up in the floor monitor while going for a tea. Harrison heard the entire thing, and would not return to the set until “that @$&^! guy was fired from the production.”

Rose pleaded with an AP not to be fired, and asked who would fill his place. The AP told him… “well, you will… except you’re the New Guy for the rest of the production.” Indeed, the call sheets read, New Guy, from then on where Rose was concerned. 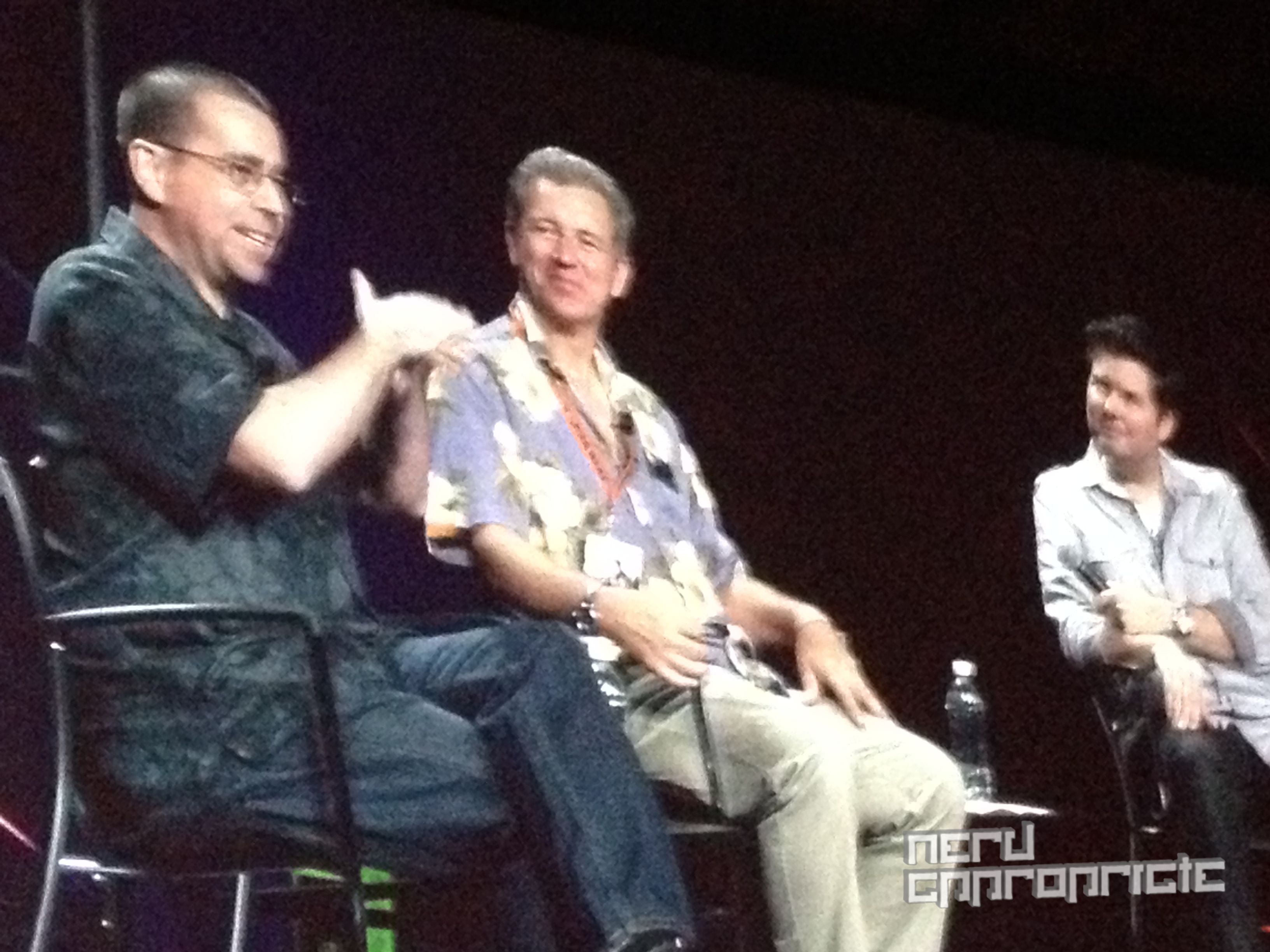 Past, present, and future

Since then both have continued to work in the industry. Quinn provided the look and feel of Woody’s Round-up in Toy Story 2. He’s also worked on Jurassic Park and Attack of the Clones, effectively straddling all disciplines. When Quinn mentioned Toy Story 2 Rose interrupted, “I didn’t know you did that, that was great!” So much admiration and respect between these two men.

Rose has this to say about Robot Chicken, “It’s a compliment, the sincerest form of flattery.” Between this and things like Star Tours, Ackbar has gotten a second life. Quinn: “Why wasn’t [Star Tours] us?! It was good, wasn’t it?” The two mean are truly grateful that these characters resonate with people after all this time.

Quinn also spoke highly of the new Muppet movie, “It was a dream come true, coming full circle. It was a do or die for Muppets, and we all knew that. It was Disney’s last chance for rebooting the characters. We all worked so hard, we wanted it to be the best it would be. We didn’t know when we finished the movie, what kind of film we had. When I saw the finished thing I was amazed at how much heart it had, how true it was to the characters.”

Tim Rose: “Once you go behind the mask, this is your chance to do something, and go just as far as your character will let you go”

Mike Quinn: “You get to be good guys, bad guys, tall, short… you could be anybody you want.“

The talk concluded some rapid fire questions, including some from the audience. The most difficult project for Mike Quinn? A front loading Washing Machine puppet for a project in Amsterdam.

What was the performance that Tim Rose was most proud of? Howard the Duck (A cult classic in Sweden aparently). Before animatronics in TMNT, Howard was a leading man in the movie and Rose was proud of the things that they were able to accomplish in the film and the fact that it didn’t fall apart during shooting.

Finally, a fan asked about Dark Crystal 2, which has been in pre-production limbo for a long time. The answer? Dark Crystal is a flop as far as the studio is concerned. If there ever will be a Dark Crystal 2, Labrynth 2, or Fraggle Rock movie [someone in the crowed audibly gasped at the mention of Fraggles] its a matter of finding someone to distribute it.

Rose’s passion for his craft and love for those he worked with was quite clear, “Now, a movie we are still talking about now 25 years later… that ain’t a flop to me” to which the crowd responded with thunderous applause.

Thanks for the memories, Tim Rose and Mike Quinn.