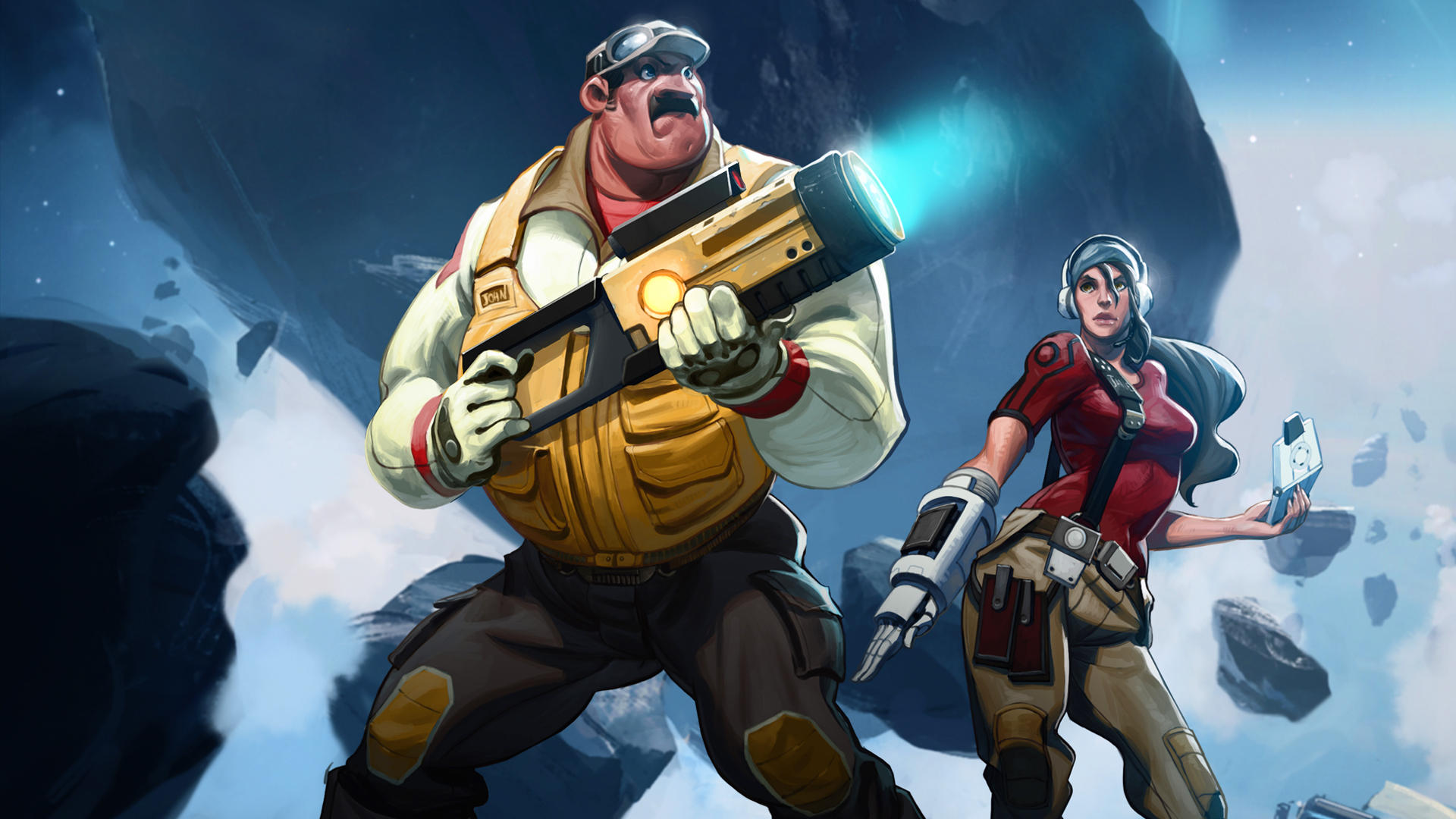 As developer Recoil Games states it, “Rock is hard. John Rochard is harder.” And I think they’re right. You play as astro-miner, John Rochard, a likable blue-collar-type guy who takes shit from no one. Before we get into the thick of this review I’m gonna tell you right now, it’s worth your time. Do yourself a favor and listen to the soundtrack in the video below while you read this review, your welcome. Now, here’s the low down:

Welcome to Skyrig: Rochard is a side-scrolling game in a gameplay style similar to Shadow Complex. Unlike the aforementioned game, however, there is no map to memorize or navigate, it’s fairly linear. That’s not a dig, just the difference. Rochard has three primary weapons: grenades (3 types), a machine-gun style weapon, and a gravity weapon (think Half-Life). There’s something highly satisfying in pulling in a crate and rocketing it into the face of an adversary.

Rochard works for Skyrig, a mining company looking for turbinium (I’m sure it’s similiar to unobtainium). When the mining team stumbles upon something unexpected, all hell breaks lose, and it’s up to our burly, mustached protagonist to save the day. Oh, and did I mention the game is styled like a early 80’s space adventure?!

Rock blasting with style: The music and the art style are top notch, evoking (in a most excellent way) character elements from other big-shouldered cartoonish avatars in the style of TF2, or SWTOR. It all just works, and if you’ve ever wondered how sometimes intangible elements like style and polish set some games apart from others I’d refer you to this and similarly hand-crafted games like Trenched or Bastion.

The characters in this game are fully voiced, giving John Rochard a personality that you can root for. The game also puts some interesting wrinkles on the projectile physics of the gravity gun by allowing the player to switch between normal and low gravity in the game’s various environments. For example, objects fly higher (John included) in low gravity, but do not pack as much kinetic punch to an enemy. However, John can manipulate heavier objects in low gravity and eventually grapple between objects, tarzan-style, later in the game. It’s just plain fun.

Down and dirty. I’m going to mention a few “yeah, buts” about this game, but in no way should this deter you from playing it. With any hope, there will be sequels to this game, so think of this as a wishlist for Rochard 2. The game is a little on the short side, coming in at about 5-6 hours on a first play-through, but the price is right for a downloadable game like this. I expected to see more puzzles, given the physics-based gameplay; while, there are puzzles in the game, they don’t necessarily make you stop and scratch your head the way some of Portal 2’s puzzles did. Heck, maybe Rochard should have a spin-off game of only puzzles (i.e. no shooting). And more music, please! The music I did hear was great, but I played through much of the game in silence, with the soundtrack only playing at seemingly critical moments. Create more music, and don’t hold back next time… it’s a good thing. What I’m really saying here is that I only want more.

Nerd Appropriate: Damn, come on. Did you like Shadow Complex? Do you like the gravity bending action of Portal puzzling? Did you like the original Battlestar Galactica (and possibly the 1980 series too)? Do your like to know your protagonist could probably drink you under the table? Well it’s time for you to take on Rochard, currently available on PC and PSN. Do it.

Review: The Inner World plays like a song on the wind

A bizzare realm found at the bottom of a large dome. Guardians of the three…