I ventured into the midnight showing of Captain America and can say this, if you were hoping for a little more Iron Man 1 and little less Thor, well then you have gotten your wish. The movie is the origin telling of Cap, taking us from just before he joins the army as a scrawny army wannabe to his post super soldier serum glory. 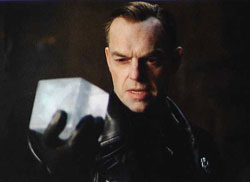 Directed by Joe Johnston, most commonly known for the fun romp Jumanji and his similar period piece the Rocketeer, this movie doesn’t lack style. The period piece part of this movie lavishes on 40s era clothing, attitudes and manners of speaking. If I wasn’t aware of the property from the comics this may have gotten on my nerve, but this fell right in line with the pre-existent material and does nothing but add to the quick sense of humor. I couldn’t be happier that Chris Evans left the sinking ship that is the Fantastic Four movies for this property because he is a perfect fit. In fact, I would say one of the major triumphs of this movie is the casting. Tommy Lee Jones plays a brilliant Colonel and Hugo Weaving, oh hugo weaving. I honestly do not know if this man can be in a movie without being awesome, but I do have to admit avoiding the last two transformer movies. Stanley Tucci and Dominic Cooper are perfect fits for the German Ex Pat scientist Dr. Erskine and the young Howard Stark, respectively. Hayley Atwell rounds out the main cast as the tough, smart and endearing love interest Peggy. Bucky, played by Sebastian Stan, is also introduced and a version of his storyline is told. 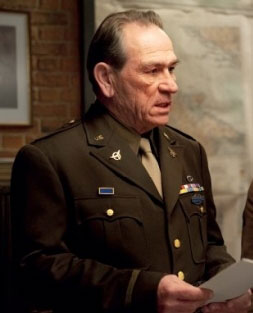 The movie isn’t the shortest, clocking in at just under two hours. There are no less than two full montages in the film, which usually signals that there was a lot left on the cutting room floor, but I don’t feel this movie lacks for it. While I do think it dragged in some parts, most of the action is fast and most of the dialogue is snappy enough to keep you interested. Only one of the montages left me wishing it had been played out and it is a sequence of fights that Captain and the Howling Commandos have towards the middle. It’s understandable that this would have made the movie that much longer, but the team was awesome to watch and I would have loved seeing those adventures. I was worried going in to the movie that we would spend a lot of time in the Pre-Cap era, but Johnston smartly pulls you into the main hook relatively quickly. The main enemy, Red Skull (Weaving), is introduced early on and the movie even dips it’s toes into the origin of Hydra, the world dominating force behind most evil in the Avengers/Captain America world.

All in all the movie left me wanting for more, which is a good thing. It was exactly what a Marvel summer spectacle should be, fun, exciting and getting the crowd laughing and cheering. If watching the girls soccer team beat up on Brazil in the last minute wasn’t enough “GO USA” juice for you, then definitely catch Captain America, you’ll be cheering for the symbol as much for the movie.

Go see this movie. It is worth the $10 to get in. If you liked how you felt after the original Iron Man, I think you’ll like this movie the same. They nailed the tone, nailed the fun, and overall just made a great movie. The action pieces are swift, the humor is genuinely funny and the amount of material they got through in even 2 hours is kind of amazing. The story makes sense from beginning to end and even fills in some gaps and background from the other movies. Marvel is getting good at slyly tying in the movies that they are surrounding this franchise and if you pay close enough attention, you will get some nudges and winks. We don’t do ratings, but if we did I’d give this one a red, white and blue out of 10. (is that how ratings work?)

No, you didn't read the by line wrong, this is Matt here reporting on a…