If you, like me, were worried about a follow up to X-Men Origins: Wolverine, mostly due to the ghastly portrayal of B level characters and a borderline non-existent story. Well, it’s time to hold on to your hats people, The Wolverine is upon us. This time around we lose director Gavin Hood, currently directing Ender’s Game, and we pick up director James Mangold. We also pick up writers Mark Bomback and Scott Frank. The change at the helm was a good thing for The Wolverine on the writing end. The story was loosely based on Chris Claremont and Frank Miller’s wonderful 4 part series following The Wolverine’s trip to Japan and his love for a young, wealthy woman named Mariko. In the comic his love is spurned by Mariko time and again with little explanation. The movie takes a different path in part to deal with the lack of back story that the comic had the benefit of providing through a much longer history. Mariko is beholden to a new man, one provided by her Father who is seeking political and financial gain from the head of the household, her Grandfather, Yashida. Shown in the opening scenes and previews, Yashida is saved as a young man in the military by Logan when America drops the bomb on Nagasaki.

The last piece to the puzzle is Yukio, played wonderfully by Rila Fukushima. In the comics Yukio is a competitor and assassin out to trick Logan in his quest to regain Mariko. In the movie she is the protagonist’s sidekick and companion. Gone is the sexual trist of the comic and what remains is an almost Father/Daughter relationship, much like the one portrayed between Logan and Rogue in the trilogy. Yukio is sent to retrieve Logan and return him to Japan so that Yashida can thank him for saving his life so many years ago. Yukio finds him hiding from society and attempting to drink away his demons. Embodied by the Phoenix, Famke Janssen. 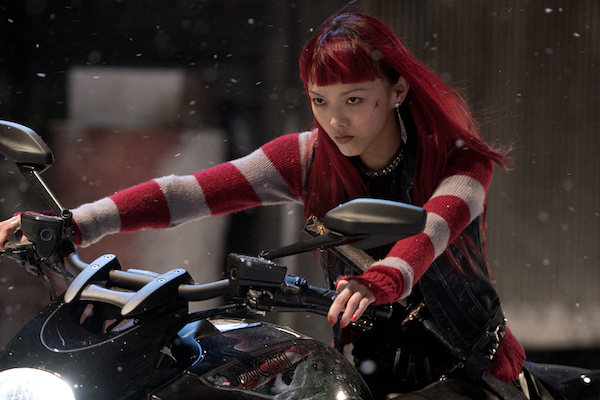 As I stated, the story is quite a bit tighter this time. Although, in reality this isn’t saying much after the first movie. The story tends to become a little loose when they sort of crowbar Mariko into the story, often trying to make her interesting by just flat leaving out the reason that the Yakuza is after her. It is a relatively fun game of cat and mouse between Logan and the Yakuza with multiple (spoilery) reveals of big bads and boss fights. All in all though, the action parts of the movie fell rather flat. With the exclusion of the interesting fight on top of a high speed train, again showcased in the preview, the rest of the fights are such quick cuts and blurry steadicam shots that you can barely tell what is going on. The Wolverine is supposed to be a fierce bad ass who is a complete savage when he fights. We are left with a man who looks like he might be punching people or throwing them, but it ends up looking sort of green screened and fake. The problem with portraying super powers is that they either come off hokey and fake or honestly boring. The happy middle ground is hard to find and Mangold appears to miss time and again. Even the final boss fight is a bit drab, with a lot of falling and not a whole lot of flash.

The entire cast is wonderful though. Hugh Jackman really appears to be sitting nicely in this character now. He plays Logan with the pathos that we’ve all been reading since Claremont got his hands on him. He is not just a badass with claws. He’s a badass with claws grappling with an eternity to live and no one to live for. He’s seen horrors that we can’t imagine and survived them all. This is the tone that is taken when Jackman falls in the roll and I enjoy it. There are a few forced “wolvie” lines like “bub”, but again that is a writing failure and hardly one for Jackman. Yukio provides some comic relief and is a total badass, when we can tell what the hell she’s doing in a fight.

All in all the movie is entertaining just not amazing. It lacks the depth and emotional pull of Dark Knight and isn’t as fun and action packed as The Avengers. It is an entertaining, although not so accurate take on Claremont’s Wolverine. I don’t know that I necessarily wanted Watchmen like accuracy to the source material, but without the dual love story and the lack of the Hand the story falls a bit flat. The Wolverine definitely redeems the state that the first movie left the character in, but doesn’t ascend it straight to heaven.

In true Marvel fashion there is a scene after the credits, I will ruin nothing suffice to say that the crowd cheered during it.

Reviewing Double Fine’s Trenched actually gave me trench foot! Okay, maybe I didn’t actually get trench-foot (which is nothing to joke about), but I did have such an amazing time playing Trenched that I didn’t move away from the television for a few days. If my feet had in fact been soaking in disease infested waters, I for sure WOULD have gotten trench foot, or as I affectionately call it “The Foot”.

What is it about Duke Nukem that makes him so special? Simple answer, Duke hasn’t changed. While Duke’s legacy of delays and closed studios has no doubt eclipsed the content of the game itself ( there is even an interactive game release timeline on the disc) Duke Nukem is the same asshole that he’s always been, and people like that. Following Scott’s lead I stopped by the nearest Red Box and payed two dollars to take Duke Nukem home with me for the evening. I had a feeling Duke would be a shitty date, but I decided to take him home with me anyway.