I don’t know how you do it, Nintendo. The Legend of Zelda has always been a great franchise, and just when you think there’s no more room to grow, it just keeps getting better. That’s not to say the franchise gets incrementally better, no. Many would argue that there have been ups and downs, not everyone was a huge fan of Wind Waker, for example. Personally, the most recent low point for me was Phantom Hourglass, where the puzzles often crossed the line between clever and clearly time-wasting. I also believe Phantom Hourglass was the one where you kept returning to the same dungeon throughout the game to keep pushing down a few more floors with each run (bleh). But I digress…

I’m going to do this more like a fond look back than a review. I love these games, and wanted to take the time to play it, instead of writing a review on day one. So let’s take a look at how this might be the best Zelda game to date. 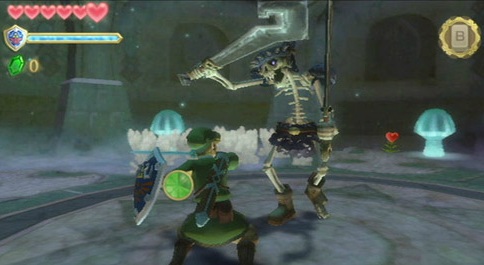 Skyward Sword is the Zelda experience on Wii you always wanted. It is also probably the Star Wars “Lightsaber” game you’ve always wanted too, but will clearly never get… and if you think Star Wars Kinect is going to fill that void you can just keep on fooling yourself. Motion Plus should have been built into the Wii from the start, but the wait for Skyward Sword was more than worth it. The game gives you pretty great control over your sword and shield, leaving you to think that the Wiimote and Nunchuck were destined for this purpose from the start. With the Wiimote you can swing your sword in 8 directions, and the tracking is pretty solid. I must admit that I failed a few times because I was trying to play lazy, moving just the remote with my wrist and not the whole arm. The experience becomes genuinely immersive if you let it… in other words, get off your ass and act like it’s a real sword. It’s something Twilight Princess lacked, but that game was really a Gamecube game, wasn’t it?

As the name might imply the game uses a flying mechanic to get around between the major areas of the game world. There’s that little mental part of every human’s brain that is intrigued with the thought of flying, it is somehow more gratifying than, say, riding a Dragon boat. I’d say it’s better than riding a horse too, but the bond you create with your bird in this game cannot compare to the one with Epona. One notable improvement in this game is that you’re not forced to do a lot of backtracking on foot (or boat). It’s easier to get around the word, giving you more time where the action is, and less time traveling. You also get to drop out of the sky and free-fall into world areas like some kind of bad-ass. Let me see you do that on a boat.

Oh, and did I mention you can run and climb too? It’s about time.

The Hero of Time

Much of this game will feel the same to seasoned Zelda fans, but somehow still different — there’s a forest place, a desert place, and a fire place, a water place, etc (that’s Japanese games for you folks). That’s because we know now that these games take place within some sort of timeline, where people and places seem familiar, but the story plays out in different ways. Would you believe that, according to the official timeline, Skyward Sword is chronologically the first game in the series? I can hardly believe it either. Apparently there are actually 3 branching timelines, thanks to Ocarina of Time — it’s pretty hard to swallow, and I still don’t quite get it. 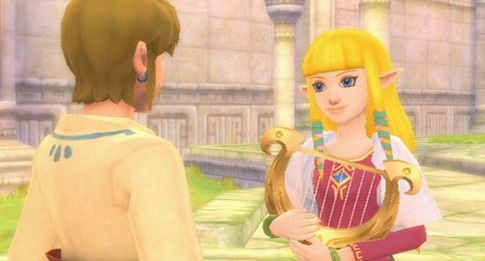 I also could have sworn that I passed through a chamber in the game that looked exactly like the main train hub in Spirit Tracks, leading me to believe that Spirit Tracks took place much earlier than Skyward Sword — apparently I’m wrong. Either way, this game wraps itself in quite a bit of lore in the Zelda universe, from the origins of the Triforce, a nod to time travel, the appearance of the Sheikah, and more. I find myself now playing these games as much for the meta-narrative, as the in-game narrative. 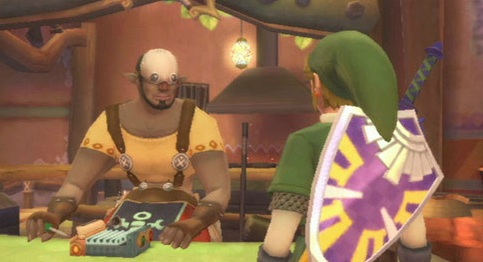 Another noticeable improvement is the manner in which items are acquired and upgraded. Older Zelda games would send you into a dungeon to pick up an item you needed, allowing you to defeat the boss and help you access in area in the game where the next dungeon resided.  Rinse and repeat. In Skyward Sword it’s not always clear where the next major item is found, sometimes you’ll get something before the dungeon, other times from a trial in the spirit realm, and sometimes from a character in game.

Other Zelda games tasked you with collecting bugs, or flowers, or components or some such nonsense for some relatively unimportant reason. Skyward Sword lets you take these components to the vendors in town to “upgrade” gadgets, and improve the power of potions. So a slingshot, for example, becomes a scattershot. The bow and arrow gets longer distance and more stopping power. This, I feel, is something that should have been in the Zelda series a very long time ago.

It seems as if Skyward Sword cut back on the cruft and provided more action. Somehow, the game is quite long, over 30 hours for me. To give you a benchmark I do just about everything that is not extremely tedious (i.e. gratitude crystals).

The art and music in the game are top notch. So top notch that this game came with a 25th anniversary soundtrack album. The music is great, and because this game is more of a legacy (nay, a “Legend”) now, the score carries with it an intangible weight you won’t find in similiar games. Zelda’s Lullaby, for example, is as recognizable to fans as Leia’s Theme is to SW fans.

Naturally, the only knock on the game is the same you’d apply to any Wii game. 480p, watercolor graphics that look pretty harsh up close. Trees that look like two pieces of construction paper slotted together. But if anyone knows how to handle these limitations are the people who make the hardware, but it’s always going to leave you wondering what this game might look like with Uncharted-level foliage. But thankfully that wait might not be too long…

There will probably be a Wii U before the end of 2012, which brings with it the promise of a new Zelda game. So I think it’s safe to proclaim that Skyward Sword will be the last Wii game I will ever play. There’s nowhere else to go but down, so why try? The end of this game was so satisfying, that there’s no way I could go to something like Wii Archery (or even Crossbow Training) or whatever. 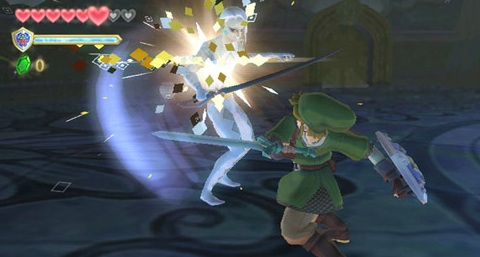 Let me put it this way: remember that awful Starfox game where they put you on the ground and gave you a staff… you spent the entire game learning how to fight with it, and when the final battle was upon you, they sent you back into space to blast your way to the end? Skyward Sword is the opposite of every game that lets you down with a gotcha boss that has nothing to do with the main game mechanic. It’s even better than thrusting a sword into the head of your enemy (actually happened in a Zelda game once, true story).

This final boss has everything to do with the main game mechanic… I got into it, physically and emotionally, I wanted to beat his ass, I’d spent over 30 hours learning how to fight with a sword and shield, it was “go time”. And… in the end, when Link raised his sword in triumph, I did too. That’s how good this game is. Period.

End of an era

So there you have it. Just as a victorious Link returns into obscurity and lays the Master Sword down, I too am retiring my Wiimote to it’s rightful resting place until the Hero of Time is called upon again to rid the world of evil. Let’s hope that day is not too far away.

New Gears 3 Screens: Who are they?

Just who are those people in the new Gears of War 3 screenshots?